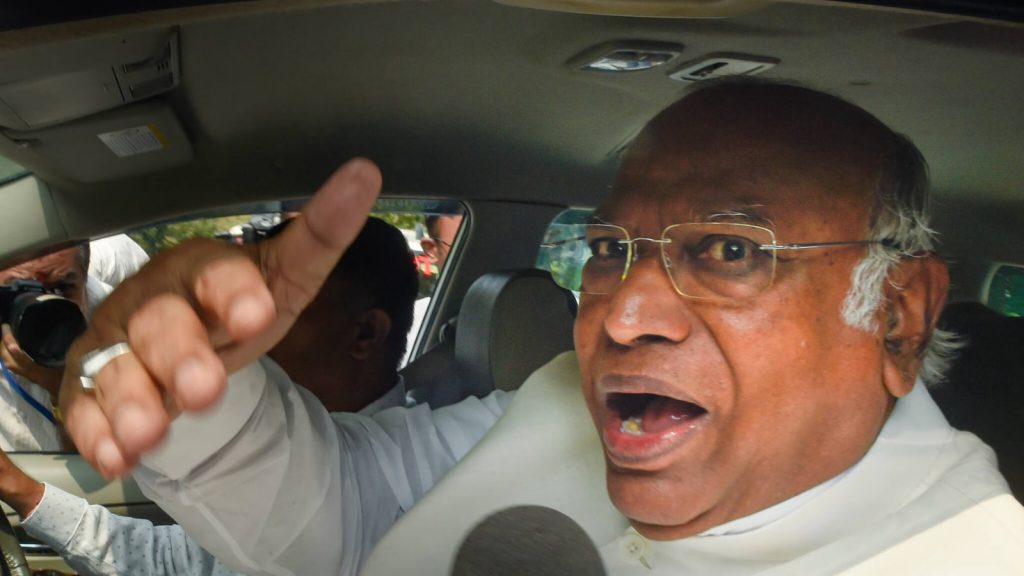 Senior Congress leader Mallikarjun Kharge on Sunday said the Gandhi family has struggled to strengthen the party, and he would have no shame in taking their advice and support in case he is elected party president. Kharge, considered close to the Gandhis, joined Rahul Gandhi in Bellary on Saturday for the Bharat Jodo Yatra and later addressed a public meeting there.

The veteran leader said he is the “delegates’ candidate” in this polls to the party’s highest post, scheduled for October 17. Responding to a question about talk that he would be remote-controlled by the Gandhi family, Kharge said, “They say such things as there is nothing else to tell. The BJP indulges in such a campaign and others follow it. Sonia Gandhi has worked for 20 years in the organisation…Rahul Gandhi was also president…they have struggled for the party and put their strength for its growth.” Congress delegates will vote on Monday to elect their party president. Kharge, who is up against party leader Shashi Tharoor, will cast his vote at the Karnataka Congress office in Bengaluru in the morning, sources close to him said.

Speaking to reporters here, he highlighted that the Nehru-Gandhi family — from Jawaharlal Nehru to Indira Gandhi and Rajiv Gandhi to Sonia Gandh — has contributed immensely and sacrificed for this country. “Just because we (Congress) lost a few elections, saying such a thing (against Gandhis) is not right. They have done good for this country. Their advice will benefit the party, so I will definitely seek their advice and support. There is no shame in it. If something benefits from your (media) advice, I will take it as well. They have worked for this party and taking their advice is my duty,” Kharge said. “Further, Sonia and Rahul Gandhi know every nook and corner of the country, who is where and who can do what for the party. What has to be done to have unity in the party, I need to learn and I will do it,” he added.

The member of Rajya Sabha from Karnataka Sunday met some state Congress leaders and addressed the media, as part of his campaign trail here. Kharge did not make any direct comments on his opponent or his campaign, merely saying everyone has the right to speak about their merit, while seeking support, like he has been highlighting about his connection with the party’s grassroots level. “I don’t want to get into any controversy, he (Tharoor) is airing his thoughts, I don’t want to debate on his thoughts. I’m sharing my thoughts. It is our organisation or a family matter. He has the right to say what he wants to, similarly I too have my rights. It is an internal friendly fight,” he said, to a question about his message for Tharoor.

He also rebuffed suggestion that it was being seen by some as a rigged election as senior leaders and delegates are openly supporting him. “I’m contacting election delegates, my campaign managers are organising…I’m a candidate of delegates, senior leaders and delegates have sponsored me.” Asked about the Congress’ prospects in election-bound Karnataka and about the impact of his election as party president, Kharge said, “Leaders in the state are fighting with a cause and working hard…I believe in collective leadership, collective consultancy. The Congress in Karnataka is united and will form a government in the state (after the 2023 Assembly polls).” Congress general secretary Randeep Surjewala said Sonia and Rahul Gandhi will always have the “moral authority” as they have always lived by principles and set up right paradigm. “This moral authority of the Gandhis comes from the 99 percent cadre strength of the party and even Shashi Tharoor swears by them,” Surjewala said.