Republicans Rally Behind Trump To Win Midterm Elections On November 8 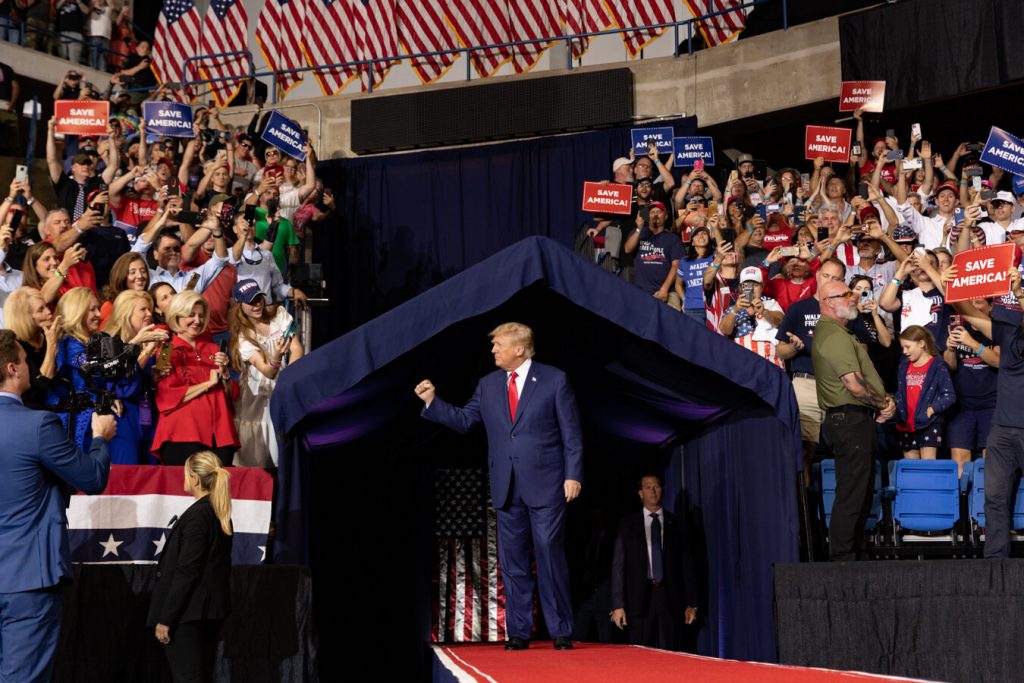 Just three weeks are left for the holding of crucial midterm elections in United States of America on November 8. During this election, all the 435 seats in the House of Representatives and 35 of the 100 Senate seats will be contested.

Betting markets are agog with speculations and most of the billings are in favour of the Republicans to capture the House, if not the Senate also. In ‘Five Thirty Eight’s Deluxe forecast’, GOP now has a 34 per cent chance of recapturing the Senate. That’s up from a low of 29 per cent in mid September. It is not crazy for markets to have anticipated some fallout for Democrats from ‘worse than expected inflation report’ published this month. History also favours the fact that the President’s party mostly having a poor midterm. According to historical trends, the president’s party typically loses an average of 28 House seats and 4 Senate seats in those off year elections.

For the last few weeks, media coverage has been leaning into the republicans’ rebound story. Republicans have unambiguously gained ground in Wisconsin, Pennsylvania and Nevada Senate races. The steady improvement in political fortunes that the Democrats experienced in the summer is over. But the Republicans’ position hasn’t really improved in Arizona senate race and Harscel Walker of the Republican Party has probably lost ground in Georgia. In Ohio and North Carolina their momentum is murky and any poll movement is hard to distinguish from political noise. The generic ballot and President Biden’s approval ratings have also not shifted very much. The outlook in the House continues to favor republicans but hasn’t changed in either direction.

There is reason to think the wreckage won’t be all that bad for democrats this election day, experts say – thanks to a combination of falling gas (petrol) prices, from over $ 5 to $ 3.30 per gallon, easing of inflation, a blistering pace of recent legislative victories for President and Congressional Democrats and the Supreme Court’s ruling that eliminated the constitutional right to a abortion over the summer.

‘I think the President’s party is going to lose seats in the house’- said David Barker, director of ‘Center for Congressional and Presidential studies at American University ‘. – four months ago they might lose 40 seats. Right now it looks they might lose 10 to 15 seats. ‘’Things were looking really bad for the Dems at the beginning’– he added – ‘and since summer there’s a turn around in terms of registration, in terms of polling, in terms of fundraising.’

President Biden and the Democrats have had several major legislative victories in recent times. Along with Biden’s $1.2 trillion bipartisan Infrastructure bill, Democrats also passed the Inflation Reduction Act, a bill aimed at lowering health care costs, reforming tax codes and combating climate change by making the largest ever climate investment in US history. Biden also issued executive orders- Student loan debt relief and Increase in Social Security benefits by 8.7 per cent. 43 million students and 70 million seniors will be benefited by those orders respectively.

On the world stage, Biden led a coalition of NATO allies successfully against Russian invasion of Ukraine which is evident in the way Ukraine has reclaimed some of its lost areas by defeating Russians in recent days. All these could have some impact in the polls.

The biggest issue around which the Democrats are rallying is around the Supreme Court decision overturning ROE vs Wade, banning constitutional rights on abortion. It set off a nationwide firestorm and is mobilizing not only Democrats but also some moderate Republicans and many independents.

That said, millions of Americans are still struggling on the economic front, despite record low unemployment, falling gas price, According to University of Michigan Consumer Sentiment index – Consumer prices on everything energy to food are still high . Republicans are hoping that economy along with hammering Democrats on border security, crime and energy independence- will bring a ‘Red wave’ in 2022.They are trying to make the midterm election in November a referendum on President Biden, his apparent failures in economic and personal front. Recent DOJ probe on his son Hunter Biden’s tax filing and lying to Govt. agencies and Biden’s faltering in speaking on different occasions recently, fuel their attacks.

Democrats on the other hand, are trying to make the election a referendum on Trump and his frailties..To be correct, they need not do that, because Trump himself is making the election about him, by him. There is no Republican party, now it has become Trump’s party – as his son Trump junior said. Starting from Jauary.6, 2021 insurrection at the Capitol Hill, he is getting embroiled in so many criminal civil litigations, that he became the center of attractions in the polls as he looks to be readying for a third presidential bid in 2024.Consider the law suits and ongoing investigations against Trump.

Surprisingly, despite of all those cases, Donald Trump’s support has been consolidated among Republicans. That’s why Trump’s nominees who support his election fraud claim conspiracy theories were able to win most of the GOP primaries to become Republican candidates in this election. They became so partisan, nothing matters in their quest to grab political powers, capture the Govt. by any means.

That personal character, morality, ethics, or any human values do not matter to them became evident when the GOP recently stood by Herschel Walker in the Georgia Senate race. Herschel is proved to be a pathological liar, a debaucher, having four sons from different women all of whom were not married to him. One of his sons , Christian Walker, aged 21, a staunch Republican and has a twitter follower of half a million, recently told the media that his father , Herschel Walker is a habitual liar, cruel and mentally unstable and he abandoned all his sons and never took any care of anybody. He is not capable of serving in the Senate.

That’s the picture of American partisan politics. Republicans are more consolidated than the Democrats in their political goal which would be reflected in the polls. 90 per cent of the Republicans say they will definitely cast their votes in the election, while 70 per cent of the Democrats say so. In midterm elections, historically young generation college students show less enthusiasm to vote and those voters are bane of the democrat’s strength. Only a surge of urgency among Democratic voters and Independents can save them from electoral loss. Abortion issue has given a strong weapon to them which might counter the GOP’s onslaught on economic issues.

Trump’s scandalous exposure on so many fronts might also become a factor in the upcoming election among the Independents and moderate Republicans, though their numbers are not very high.

The Republicans started their campaign as referendum on President Biden, but now it has been transformed to a referendum for Donald Trump. On Republican side it helped to solidify their base, but for the Democrats it gave them a channel to balance the GOP’s advantage in polls. In the beginning it looked certain that the Republicans would win the House and even the Senate. But now that becomes uncertain. Inspite of different models and election pundit’s predictions, the final outcome of the vote could tilt both ways, especially anything can happen during the last three weeks of the election to change the moods of the electorate and their overall participation in the polls. (IPA Service)