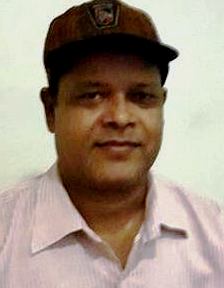 Veteran journalist Upendra Prasad, who had made a sort of history in Hindi journalism in 1990s by writing on socio-economic issues that influenced both the society in the Hindi speaking belt and the politics in transition at that time, passed away in the late night on Friday, September 23 in Batra Hospital, Delhi after a cardiac arrest. He is survived by his wife Manjula Prasad and a daughter Kriti. We suffered a tragic loss in the IPA-Samvad family, of which he was a member since 2008 as editor of Samvad, the Hindi service of IPA.

Let us recall the 1990s, the era of economic reform with political transition with social justice as the major theme. Socio-economic issues had come in the forefront of journalism, but there was a dearth of economic journalists in Hindi newspapers and magazines, which were generally publishing the economic pieces after translating them from English. Upendra Prasad had just passed out from Delhi School of Economics and pursuing further studies in Jawaharlal Nehru University. He had started writing for Navabharat Times, New Delhi on economic issues.

The great journalist Rajendra Mathur was editor of Navabharat times at that time, and he loved his articles to the extent that he decided to appoint him assistant editor, since he wanted to publish original economic pieces in Hindi in his newspaper. It was a sort of history, for such a special appointment for economic writing in Hindi was unheard of in Hindi journalism though some of the other bigger newspapers did have some writers to write in Hindi on economic issues. That was the year 1990.

Mandal Commission’s recommendations were implemented the same year by the then Prime Minister Vishvanath Pratap Singh, which influenced the entire socio-political scenario of the country. Moreover, the economic liberalization was initiated in 1991 by Manmohan Singh as finance Minister under PM Narsimha Rao. The socio-political and economic environment of the country was ridden with a particular sensation and uncertainty. During that time Upendra Prasad wrote brilliant pieces in Navabharat times – both articles and editorials on socio-political and economic issues as assistant editor.

He worked in New Delhi until 1994, and when Navabharat Times decided to launch its Patna Edition, Upendra Prasad was sent to Patna as Resident Editor. However, the circumstances enforced the closure of the edition in 1995, after which he came back to New Delhi and remained with Navabharat Times until 2001.

He was for social justice in his opinion and economic reform but was against any rash decision that may hurt the ultimate interest of the society as a whole. He was for prudent approach towards socio-political and economic changes in the country. He supported reservation, but opposed the creamy layer, and advocated rethinking on the entire reservation policies since it has failed to bring several most backward castes and maha-Dalit communities into the mainstream. His stance has attracted many political leaders batting for social justice, like Lalu Yadav, Nitish Kumar, Sharad Yadav, and Mulayam Singh Yadav etc towards him.

Upendra Prasad was also against disintegration of Bihar. Carving out Jharkhand from Bihar was a mistake, he used to say, but then he also opined with great sadness that leadership in Bihar had not been treating Jharkhndis well, which resulted in bifurcation of the state. He was for some sort of stronger alliance of Bihar and Jharkhand, to overcome the miseries of both the states. This stance has attracted several politicians from Jharkhand, such as former JMM leader Suraj Mandal. He wrote very hard-hitting commentaries on socio-economic disparities and contradictions for which the mainstream Hindi journalism would remember him. Contemporary politics took his commentaries seriously.

After quitting Navabharat Times in 2001, he contributed toseveral Hindi newspapers and magazines. He joined IPA in the capacity of editor of its Hindi service Samvad in 2008 andcontinued on the post until his death on September 23, 2022. Losing such a brilliant journalist and so nice a person is a great tragedy.

He had a keen interest in India’s cultural and religious life. To understand it better he got himself admitted in Lal Bahadur Shastri National Sanskrit Vishvavidyalaya and learned Sanskrit. He learnt even ‘karmakand’ and ‘Yoga’. He had a deep study of the caste system in India, that gave him edge in writing socio-political commentaries, and his economic understanding blended with it was an added advantage.

He was born in Bihar at Dalish Mand Chak village of Bhatgaon panchayat in Barh subdivision of Patna district on May 4, 1963. He studied in Patna Collegiate School, and graduated in Economics from Patna College, only to join Delhi School of Economics, from where he launched his career by contributing original writings in economics in various newspapers. His writings were a class in themselves.

IPA-Samvad family pays him homage with heavy heart and condoles his death wishing for his daughter and wife strength enough to overcome the grief. (IPA Service)