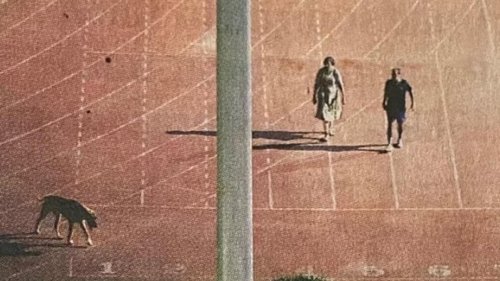 After the newspaper report with the picture showing the IAS couple watching the dog take a walk in the stadium, the Ministry of Home Affairs transferred Sanjeev Khirwar to Ladakh, and Rinku Dugga to Arunachal Pradesh, separating the couple, and punishing the dog for being the reason for their separation. The decision that will mar the careers of the IAS couple, and dog them for the rest of their lives, is also a dog whistle to the powerful in the higher echelons of the bureaucracy.

At the same time, it is a case of the tail wagging the dog, and a violation of a rule concerning IAS/IPS postings put there at the behest of Prime Minister Narendra Modi himself, in 2017. That being said, the transfers of Sanjeev Khirwar and Rinku Dugga, both of the AGMUT cadre, whose love for the dog has placed them in the doghouse, is now part of IAS lore.

For, without doubt, they are “punishment postings”, except that it is the dog which got punished worse than Khirwar and Dugga. Other than separating the K9 from friends Sanjeev and Rinku, the pet dog has been marked genderless. Is it a ‘he’ or a ‘she’, or a pronoun? The newspaper which was basking in the glow of the expose, didn’t take the trouble to identify the ‘sex’ of the canine.

Also, a pet without a name to it is an insult to all pets. There is no dog in all of the Universe without a name. And there are some famous dogs with names. Google and you will get them. In the United States, where the dog is the most revered of pets, this can lead to an outpouring of indignation. If Americans dislike the Chinese and Koreans for one reason, it is for their love for dog meat.

Union Home Minister Amit Shah and Delhi Chief Minister Arvind Kejriwal wouldn’t be welcome in America if the Khirwar-Dugga-and-dog story gets around in the White localities of the USA. The Black and Hispanic of the US may be forgiving, but it’s the White man and woman, not the person of colour, who will show Shah and Kejriwal what they think of the tail wagging the dog.

Of course, both the dog and the IAS couple are in the dock also because of the tussle between the Delhi Government and Centre, both of which want to usurp the title of sports lover from the other. The stadium that emptied for the dog comes under the jurisdiction of the Kejriwal Government, while the Khirwar and Dugga answer to the Lt. Guv of Delhi, i.e., to the MHA.

The dog-in-the-stadium has led to a bat-fight between the Centre and the Delhi Government, both of which are taking credit for the quick-fix transfers of Khirwar and Dugga, to east and west—icy hills, and verdant forest.

Of course, the Kejriwal government is at fault. Khirwar and Dugga were emptying the stadium every evening from right under the nose of the Delhi Government. Khirwar was Secretary (Revenue) and, therefore, must not have had control of ‘Stadiums’. Whoever had was neglecting his duty; the stadium staff was equally complicit. Some heads must roll on the stadium tracks, too, right?

But would that leave the Centre and the Ministry of Home in the safe lane? Hardly. If anything, the decision to punish the two IAS not only violates the Centre’s service rules, it also shows how unimaginative and callous the Modi Government can be, despite all the tom-toming that it’s the most sensitive Centre ever, especially when it comes to the northeast, and the border states.

Isn’t it a fact that Modi and Shah are always painting themselves as the “saviours of the Seven Sisters” in this dog eat dog world? Dog-in-the-stadium has exposed them, and it isn’t a pretty picture, when Arunachal Pradesh is not only seen as, but also made a punishment posting—the Kaalapani among postings?

Are the frontier states of Arunachal Pradesh, Mizoram, Tripura, Manipur, Meghalaya, Nagaland, and Assam, all of them, punishment postings, for rogue IAS and IPS, and, in many cases, ‘punishment’ for honest IAS/IPS who do not toe the Centre’s line, or refuse to follow certain orders? Is Ladakh also a punishment posting, a region which was cut off from the erstwhile J&K state, and declared a Union Territory after Article 370 was ditched in a Himalayan gorge?

Picturesque and verdant Arunachal Pradesh, melding seamlessly with the Tibetan landmass, and the rough, tough and brusque Ladakh, marked with the vastness of space above, and the terrain below, are they the frontiers of civilization, where punishment is delivered to those who have overstepped, for right or wrong?

In 2017, an IAS officer and her IAS spouse pleaded that they be posted in the same cadre and the matter went to the Prime Minister-chaired Appointment Committee of the Cabinet, which amended the Indian Civil Service rules to allow IAS/IPS couples to work in one state.

Five years on, that rule lies abandoned somewhere on the roadside of the 3465 km distance between Ladakh and Arunachal Pradesh, the distance covered in 72 hours by road. But what happens to the nameless and genderless dog is the real Shakespearean tragedy played out in this episode of ‘It’s a Dog’s Life’. (IPA Service)