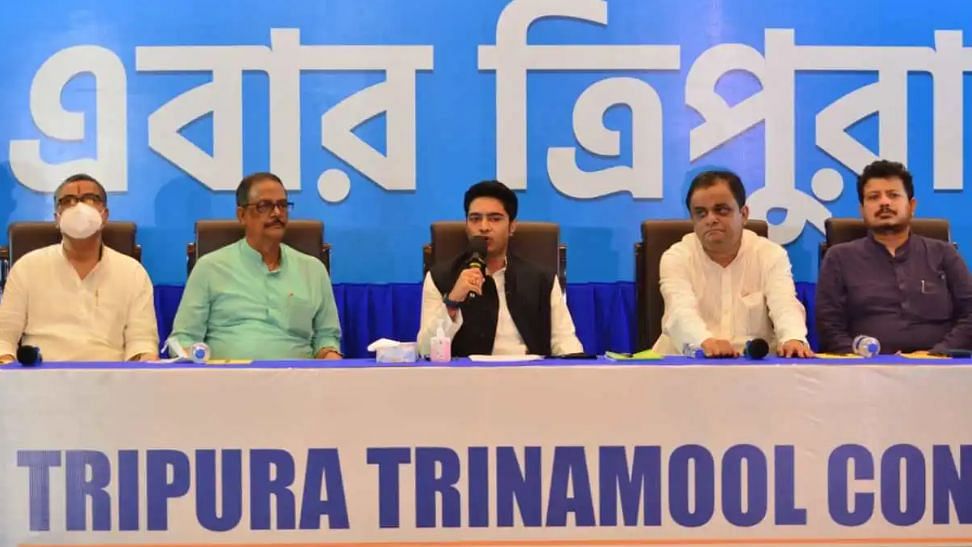 Senior Trinamool Congress (TMC) leaders in West Bengal are deeply embarrassed by the unacceptably poor performance of their party in the recent Tripura Assembly by-elections. They have been remarkably reticent on the issue, not least because the humiliation they face is directly attributable to party second-in-command Abhishek Banerjee MP.

For the record, the TMC contested all four Tripura seats up for grabs and carried out an expensive, high-octane campaign led by the same Mr Banerjee, who is also the All India party General Secretary

Eventually the TMC garnered a mere 2.72% of the aggregate votes recorded, failing to win a single seat. All four TMC candidates lost their security deposits. Two of the candidates ended up winning fewer than 1000 votes, while the other two barely managed to cross the 1000 figure! In sharp contrast, the ruling Bharatiya Janata Party won 45.73% of the votes polled, the CPI(M) 20.76%, Congress 24.80% and the Forward Bloc 2.46%.

There was one saving grace from the TMC camp in that candidate Panna Deb, contesting the Agartala seat, said ’No comment,’ when asked to explain the debacle. In contrast to the optimism expressed by Banerjee and his loyalists even in the post poll period, the initial reaction seemed much wiser.

For a party that had thrown into its campaign heavy weight leaders like Firhad Hakim, Manas Bhuyan ,Sayoni Ghosh and others ,while former Bengal Minister Rajib Banerjee had camped in Agartala for the last few months as a the local resident party commander, the Tripura outcome was a massive comedown .

Following the example of supremo Mamata Banerjee, who brazens out her way out of most embarrassing situations, Mr. Banerjee and others adopted the counterattack mode. Without speaking a single word in self criticism, they blamed the ruling BJP in Tripura for launching a terror campaign which had made campaigning very difficult. The state police had also played a partisan role.

Nothing daunted, Banerjee declared that the fight to defeat the BJP in Tripura would continue. The BJP he warned should not gloat over the outcome of the by-polls. The BJP won three out of four seats contested, with new Chief Minister Manik Saha getting re-elected comfortably. In 2018 too, the BJP had won three out of these four seats in the assembly polls.

The TMC had won one out of 330 seats up for grabs in the municipal polls. It is another matter that currently, the lone former TMC winner is a BJP member, having switched sides as he followed familiar northeastern political traditions. The point is, the TMC had won a respectable 23% (approx) share of popular votes, much of this coming from Agartala urban areas and the adjacent semi urban pockets.

This is why the most embarrassing basic question TMC leaders are not addressing — how in the course of a few months, the vote share of 23% could get reduced to barely 2.7% in the by-polls — needs answering urgently.

Agartala-based analysts have already provided an answer of sorts to the question, in the absence of any explanation from either Ms Mamata Banerjee or anyone else.

They refer to the victory of ex BJP leader local veteran Sudip Roy Burman who contested the by polls on a Congress ticket this time. He won from the Town Bordowali seat in the bypolls. Despite carrying out an often difficult campaign, Burman won over his nearest BJP rival with a fairly comfortable margin in a prestige contest of sorts.

The point is, Mr Roy Burman had been functioning as a dissident within the BJP for some time. More to the point, he had helped the TMC carry out its campaign for the municipal polls, providing it with valuable inputs regarding specific areas, the complexities and nuances of local grassroot politics, well as incisive insights about the candidates in the fray.

Guided by his advice, the TMC could punch above its weight in the municipal polls, as its campaign could jell effectively with local sentiments and emotions.

This time it was different, as Roy Burman switched over to Congress from the BJP, deserting the TMC. He explained his preference to join the old party instead of the TMC because he felt the latter was interested only in helping the BJP through its tactics of cutting into the votes won by secular parties like those in the Left front and Congress,. As he explained to Agartala-based newspersons, his fight was against the BJP for its misrule and corruption, not to help it.

This makes it clear that as the TMC carried out its pre-poll campaign for the by-polls, it did not receive the kind of valuable assistance it received from Mr, Roy Burman a few months ago. The results are there for all to see.

Again, the BJP did not win 50% or more votes in any of the 4 seats, registering around 45% of the total votes. The combined votes of Congress and Left parties would have made it very difficult for the BJP to win.

‘This makes it clear that in Tripura, an electoral understanding would have helped a Left/Congress alliance to defeat the BJP here, even in the present situation’, said one analyst. This should be properly appreciated by the secular forces in India, for future Assembly elections which are due next year. The Congress and the CPI(M) are aligned nationally against the BJP. So it makes sense for the two parties to work for some understanding right now so that an alliance is possible to challenge BJP in the state assembly elections in 2023. (IPA Service)