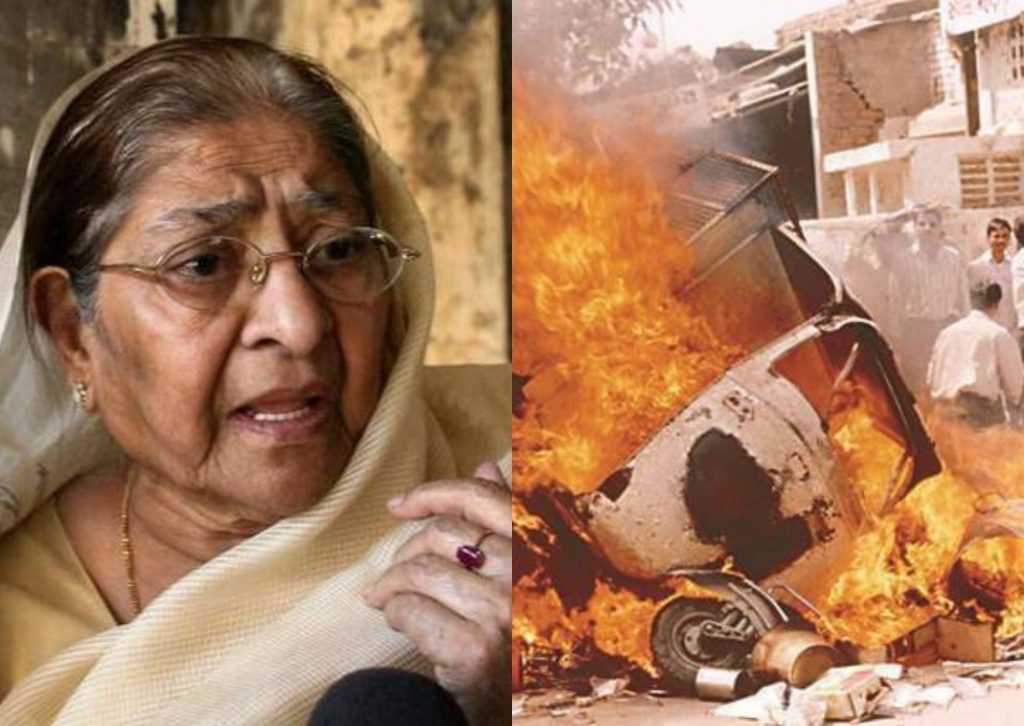 Senior advocate Fali S. Nariman, described civil rights activist and journalist Teesta Setalvad as a “foot soldier of the Indian Constitution”. Today, the foot soldier has been arrested for zealously pursuing justice for one of independent India’s most egregious wrongs, namely the Gujarat pogrom, which was unleashed following the Godhra train burning of February 27, 2002.

The instigation for Setalvad’s arrest is a paragraph in the Supreme Court’s judgment of the Supreme Court of last Friday (delivered, ironically, a day before the 47th anniversary of the emergency) dismissing the appeal by Zakia Jafri, widow of former Parliamentarian Ehsan Jafri who was slain before her during the pogrom. Jafri had petitioned for an investigation into the conspiracy behind the pogrom.

The Supreme Court, in dismissing Jafri’s petition, had observed that a “coalesced effort of the disgruntled officials of the State of Gujarat along with others was to create sensation by making revelations which were false to their own knowledge.”

The judgment then described those who used the process of law to pursue justice for the victims of 2002 for over 16 long years as having the “audacity” to “question the integrity of every functionary”. The Court noted that their motives had an “ulterior design”. The Court observed that “all those involved in such abuse of process, need to be in the dock and proceeded with in accordance with law.”

A day after the judgment was delivered, (on the anniversary of the emergency) the Union Home Minister, Amit Shah gave an interview in which he said that the judgment mentioned Setalvad’s name, and that the NGO run by her had “given baseless information about the riots to the police”. A few hours later, the Gujarat Anti-Terrorist Squad arrested Setalvad from her house. The first information report (‘FIR’) records that the crimes she is accused of include forgery, giving false evidence with intent to procure conviction, and conspiracy. The FIR is against Setalvad as well as former Indian Police Service officers Sanjiv Bhatt and R.B. Sreekumar for the conspiracy to commit these offences.

Setalvad is a relentless crusader who pursued all legal avenues to bring justice to the victims of the pogrom.

Bhatt is a former Deputy Commissioner of Intelligence in the Gujarat Intelligence Bureau, who had filed an affidavit in the Supreme Court in 2011 against Narendra Modi, who was the Chief Minister of Gujarat during the 2002 pogrom, concerning Modi’s alleged role in the pogrom. He also filed a public interest litigation in the Supreme Court that year, requesting for an independent agency to investigate the pogrom or, alternatively, for the case to be transferred outside Gujarat. He was dismissed from the Police Service in 2015 due to ‘unauthorized absence’, and is currently in jail serving a life sentence he was awarded in 2019 in a custodial death case from 1990.

R.B. Sreekumar is a former Additional Director General of Police (intelligence) in Gujarat who filed affidavits before the Commission of Inquiry comprising Justices G.T. Nanavati and A.H. Mehta, appointed to probe the Godhra train burning and pogrom of 2002 in Gujarat, detailing the acts of omission and commission of Gujarat administration under the Chief Ministership of Modi during the pogrom.

The judgment records that Bhatt had claimed that the then Chief Minister in an official meeting, while addressing the DGP, the then Chief Secretary and other senior officials of the State, had instructed them to allow the mobs to give vent to the Hindu anger on the minority in the wake of Godhra incident.

The judgment finds that there is no truth to the submissions by either Sreekumar or Bhatt, going to the extent of stating that Bhatt never attended the meeting, so he could not have known what was said in the meeting. It concludes that there was no larger conspiracy “linking the separate incidents of mass violence across the state”. The Supreme Court agrees with the Special Investigation Team (‘SIT’) formed by it to investigate the matter, in coming to its conclusion.

However the amicus curiae, senior advocate Raju Ramachandran, appointed by the Supreme Court to assist it, points to the difficulty in ensuring justice for the victims of the pogrom. He states that, “It would be impossible to get anyone present in the meeting on 27.02.2002 to speak against Shri Modi, especially the bureaucracy and police officials”.

The Supreme Court spends much time debunking the possibility of a conspiracy, ‘hatched at the highest level in the State’.  While the evidence before the court might not have shown a conspiracy (for the reasons pointed out by the amicus), the question remains as to why did the violence happen. Why did the government of the state not bring the violence under control quickly and effectively? The court seemed satisfied with the statement of the then Chief Minister Modi that he had given “categorical and clear cut instructions to maintain peace and communal harmony at any cost.”

The follow-up question as to why, in spite of such ‘instructions’, violence engulfed Gujarat, was not probed by the SIT or inquired into by the Supreme Court.  To answer this question the Court could have concluded that conspiracy was not made out, but that does not mean that no crimes were committed.  It could have recommended that Parliament consider amending the Indian Penal Code to include the notion of command or superior responsibility so that such wrongs (as allowing thousands of innocent men, women and children to be killed under one’s watch) in the future become prosecutable crimes.

The Rome Statute of the International Criminal Court, under Article 28(b), lays down that when the crimes against humanity, genocide and crimes against peace are  committed by subordinates , the superior should be held criminally responsible if the “crimes concerned activities which were within the effective responsibility and control of the superior” and the “superior failed to take all necessary and reasonable measures within his or her power to prevent or repress their commission of such crimes”.

The only one to ask the question of the superior responsibility or constitutional responsibility of the Chief Minister is the amicus Ramachandran. In the note he submits to the Supreme Court, which is produced as the first annexure to the judgment, Ramachandran states that “there is nothing to show that the CM intervened on 28.02.2002 when the riots were taking place to prevent the riots. The movement of Shri Modi and the instructions given by him on 28.02.2002 would have been decisive to prove that he had taken all steps for the protection of the minorities…Neither the CM nor his personal officials have stated what he did on 28.02.2002. Neither the top police nor bureaucrats have spoken about any decisive action by the CM”.

Without invoking the idea of the constitutional responsibility of the Chief Minister and without testing whether the Chief Minister in this case had done all within his power to prevent the commission of the crimes of 2002, the conclusion of the Supreme Court rings hollow.  The fact that the crime of conspiracy is not made out is not evidence that no crimes were committed by those in control and command of the state machinery.

Sadly, the Supreme Court went further and put its seal of imprimatur on the theory that what happened post Godhra was a spontaneous occurrence, and at best, lower-level functionaries are responsible for the violence. The idea of spontaneous occurrence was debunked in numerous fact-finding reports prepared by civil society, including by a nine-member `Concerned Citizens Tribunal – Gujarat 2002′ headed by former Supreme Court judge, Justice V.R. Krishna Iyer. In fact the Supreme Court itself, in its 2004 judgment in the ‘Best Bakery case‘ had observed that, “the modern day ‘Neros’ were looking elsewhere when Best Bakery and innocent children and helpless women were burning, and were probably deliberating how the perpetrators of the crime can be saved or protected.”

It is this long history of seeking accountability for the crimes of Gujarat 2002 (which included the work by the Supreme Court itself) which the court has abjured in its judgment. A lack of faith in the state administration had prompted the Supreme Court to transfer key riot cases out of Gujarat. All of these efforts by victim families, civil society, the National Human Rights Commission and the Supreme Court resulted in the conviction of over 100 persons in trial courts.

The Supreme Court has travelled a long way from linking the killings to ‘modern day Neroes’ to seeing the very struggle for justice as having the ‘audacity’ to ‘question the integrity of every functionary’.

This judgment and these arrests bode ill for the future of Indian democracy. (IPA Service)