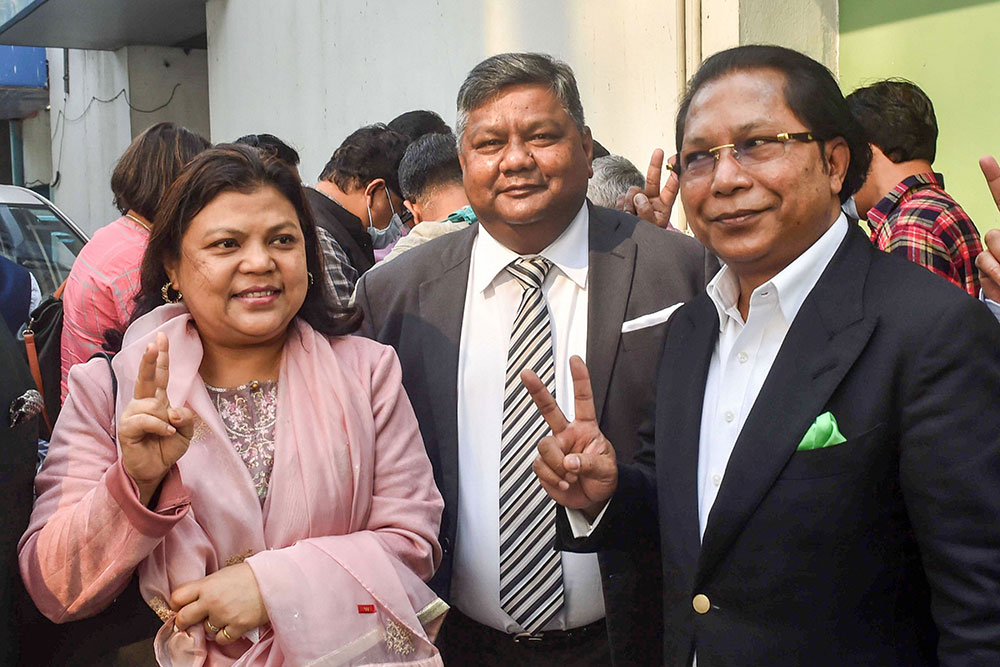 In Meghalaya, led by MP Abhishek Banerjee, the state unit of the Trinamool Congress (TMC)has surprised hill voters by launching a massive pre-poll campaign a few days ago. In a state where most other parties including the ruling National Peoples’ Party, Congress and the BJP have not moved beyond the stage of inner party discussions the new entrant TMC organised a major rally attended by an estimated 15,000 people at Tura, addressed by Mr. Banerjee.

Commenting on the matter, Shillong-based media reported that elections in the state were usually a laid back affair, unlike polling trends in other states. Rallies attended by 5000 people or more were rare. Even the TMC used to hold compact meetings. Smaller gatherings held a few days prior to the day of polling was the norm for most contestants.

This time, the TMC according to commentators and local leaders, has tried to win local attention with a new style, full-throated political campaign long before the poll schedule has been announced. Veteran leader Mukul Sangma, a former Congressman who joined the TMC, has been understandably busier than other heavyweight leaders who are yet to join the fray. With the date of elections yet to be announced, no party has finalised a list of its candidates, even as informal talks are on exploring the possibility of alliances in the familiar NE political style.

Apart from carrying out a house to house campaign to make the TMC rally a success, local leaders spared no pains to make Mr Banerjee’s visit a major programme in its own right. TMC flags and banners were put up not only in Shillong, but in many parts of the state, surprising other parties.

TMC leaders are looking forward to following up Mr Banerjee’s programme by organizing an even bigger event soon– along awaited visit to Meghalaya by West Bengal Chief Minister and TMC supremo Ms Mamata Banerjee herself. The party expects even larger record-breaking crowds to attend her meetings. The assembly elections are due early next year. The rejuvenated TMC is all set to use the popularity of Bengal CM in the poll campaign.

These big ticket events are apparently apart of an elaborate campaign plan worked out by poll strategist Mr Prashant Kishor who has been working closely with Mr Banerjee these days. Incidentally Mr. Banerjee has not only addressed a big rally, with his message to the people to give the TMC a chance to develop and strengthen the state of Meghalaya. He strongly attacked the BJP and Congress for their divisive policies and administrative failures which had hurt the people in the hills.

The MP from Diamond Harbour in West Bengal, who is also the TMC General Secretary, took the opportunity to launch another attack against the BJP while commenting on the recent Assam-Meghalaya border incident wherein six people were killed in firing by Assam police. The people of Meghalaya, he said must stand up once and for all to stop the never- ending bullying from Assam, a BJP-ruled State. The TMC in Meghalaya would never stand for such treatment from its bigger neighbour, he added.

The TMC’s political fanfare has naturally attracted comments, encouraging speculation about it sample resource base. The party is supposed to be under severe political pressures, following the recent widespread arrest of its Ministers, MLAs and other leaders in connection with several major scams costing the state exchequer hundreds of crore of rupees in West Bengal. Mr Banerjee, his wife and in-laws have faced questioning from the Enforcement Directorate in connection with instances of major corruption.

This has had an impact on the party’s activities in the Northeast states, too. Only weeks ago, TMC insiders in Bengal admitted that expanding organizational work in the region was getting more difficult because of ‘financial constraints’.

However, present developments in Meghalaya suggest that the party has got over its financial problems , for now.

Bengal-based TMC leaders are not surprised by the lavish launch of their pre-poll campaign in Meghalaya. They conceded that the earlier TMC campaign in Tripura to challenge the BJP in the municipal polls, too had been expensive. Unconfirmed reports claimed that over Rs 60 crore had been spent in Tripura, as Kolkata-based leaders carried out a pre-election blitz to woo the Tripura voters with accounts of various social welfare programmes run by the party in Bengal.   PK’s team had visited the state and directed the campaign — not only in Tripura but also in the Goa Assembly elections, later on.

Both in Tripura and later in Goa, Kishor’s plans did not succeed. In Goa, the TMC according to reports published in various media had spent Rs 47 crore during the Assembly poll campaign. The BJP had spent Rs 17 crore and Congress, Rs 12 crore and the AAP, around Rs 3 crore.

In Tripura, the TMC could not win any of the 330-plus seats in the municipal polls and ditto in the 40-strong Goa Assembly. The AAP on the other hand, made a better debut than the TMC winning two seats while contesting with fewer candidates, and spending less than one-fifth of the amount spent by the TMC. But TMC is determined to make a big breakthrough in Meghalaya politics in 2023 following the programme set by Prashant Kishor. (IPA Service)

10-Year Tenure For Public Sector Bank Leadership Is Out Of Sync With New Banking
Posting....