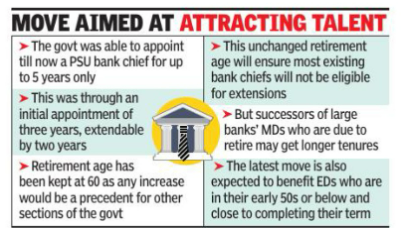 From frying pan into the fire. This is exactly the case about the tenure of the managing directors and CEOs of public sector banks (PSBs). The perennial complaint about leadership tenure in PSBs was that frequent changes at the top led to instability and lack of consistently and continuity. Now the pendulum seems to have moved to the other extreme, with the need for stability bringing in nearly permanency that is both unwieldy as well as untenable.

According to a new government notification, the maximum tenure of MD and CEO of public sector banks to 10 years subject to a superannuation age of 60 years. This is also applicable to whole-time directors of all PSBs. The government logic behind the move is that it will help retention of the best talent in the banking sector. The earlier tenure was a maximum of 5 years or 60 years of age, whichever came first.

So, the argument that the frequent changes are due to short tenure goes out of the window straightaway. Punjab National Bank, for instance, had five MDs in just seven years, implying that no one lasted any reasonable length of office, let alone completing the full tenure. In this context, a tenure of 10 years is unthinkable, particularly when the industry is becoming so dynamic that systems and practices get outdated within no time of their introduction. So, permanency of leadership does not sync with the fast-paced changes overtaking the banking scenario.

A time span of ten years in today’s world, in which technology has overwhelmed every activity and area under the sun, is as good as a century in the traditional sense. Artificial intelligence and robotics are changing the way life is carried out. The rate of redundancy is so great that today’s technology is of no use tomorrow; so is the case of business leadership. Legacy approaches, which are the staple diet of old generation of managers, are not only inadequate, but deterrent.

Business models in new banking are entirely different from those of traditional banking, where success depended most on the quality of relationship managers and complexity of products in the portfolio. In new banking, it is user experience and product simplicity that determine success. According to a 2021 McKinsey survey, for example, 71 percent of consumers expect personalization from businesses and brands, and 76 percent of those consumers get frustrated when they don’t receive it.

According to McKinsey, in today’s digital-first world, incumbent banks with aspirations of becoming digital banks will have more success by modelling their approaches and capabilities on leading tech companies such as Google and Amazon than on traditional banking operations. This includes building and continually innovating their technology platforms with the latest advancements, hiring the best developers, and quickly bringing new products to market and refining them over time based on customer insights.

More successful banks today are those which get better at listening to their customers and becoming more customer-centric, just as leading technology and digital businesses do. “They need to better understand their customers, identify specific needs or pain points, and respond by providing more personalized, targeted offerings to address those needs. This should be done in an iterative, controlled manner, focusing on specific niches or user segments with a small set of prioritized use cases that are launched rapidly and scaled incrementally. Banks must shift their thinking from rigid products to fit-for-purpose, customer-centric offerings,” says a McKinsey analysis.

All these are areas that the public sector banks have been slow in recognizing as well as adapting. The net result is there for everyone to see. They try to marry brick and mortar with its command and control method with highly disruptive tendencies and make a hash job of it as attitude changes are hard to come by.

According to published accounts, state run lenders which had 87 percent of the total deposits and 85 percent of credit share in 1991, have seen their numbers come down to 61 percent and 57 percent respectively by the end of March last year. In short, they have lost nearly a third of their business. There are many reasons for such a sorry state of affairs, including a below-par responses to developing situations. Tyranny of future scrutiny is, of course, a major inhibiting factor for leadership, but the problems are also due to an inability to absorb the dynamics of changes in the nature and scope of the industry. (IPA Service)