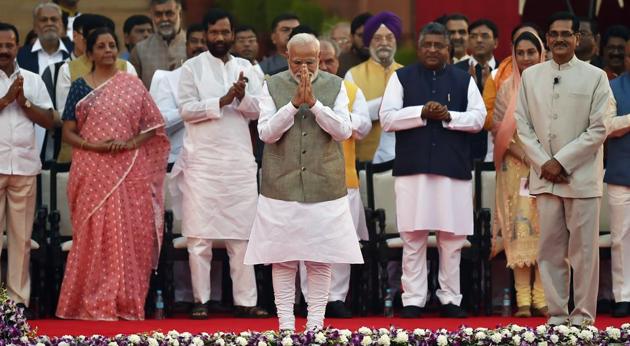 The BJP is conducting a fortnight campaign to celebrate the completion of eight years of the Modi government.  The campaign seeks to highlight claims of the various achievements of the government regarding economic growth, infrastructure development, foodgrain production, social welfare schemes and foreign policy. All these are attributed to the initiatives and the tireless work of Prime Minister Narendra Modi.

However, what is missing from the elaborate list of achievements are the steps taken by the Modi government to strengthen democracy and the constitutional framework to safeguard democratic rights of citizens and to ensure social and economic justice as enjoined in the directive principles of the constitution.

This is a deliberate omission as it is in these spheres that the Modi government has worked in the past eight years to inflict immense harm to the democratic system and the constitution.

The eight years of Modi rule have been marked by systematic efforts to abridge parliamentary democracy, curtail democratic rights of citizens and subvert all the institutions which uphold the constitutional order. The devaluation of parliament and the degrading of parliamentary procedures have become particularly virulent in the second term of Modi government. Parliament has sat for less than fifty days last year. Apart from lack of discussion on legislations, there is hardly any scrutiny of legislative bills. From 60 to 70 per cent of the bills being referred to the standing committees by the Lok Sabha during the UPA government, it dropped to 27 per cent in Modi’s first term and to just 13 per cent in the second term.  This is compounded by the denial of the right of the opposition to raise issues and press for a vote during the legislative process. The way the three farm bills were railroaded through the Rajya Sabha is a prime example.

If parliament is subject to restrictions and the rights of members stifled, the entire parliamentary democratic system itself is being undermined. The Election Commission, which is the centrepiece for the conduct of free and fair polls, has itself been bridled and is increasingly seen as compliant with the wishes of the executive.  The device of electoral bonds has legitimised bribery and kickbacks and ensured a steady flow of funds to the ruling party, while depriving the opposition of sources of funds.

The attack on the opposition parties is now conducted through the official agencies of the centre. Leaders of the opposition parties are targeted by the CBI, Enforcement Directorate (ED) and Income Tax Department. Cases are filed against them and some of them have been arrested and put in jail.  Currently the health minister of Delhi belonging to AAP and a minister of NCP in the Maharashtra cabinet are in custody in cases filed by the ED. Dozens of opposition leaders are facing investigations by the CBI and the ED and these are sought to be brazenly used to suppress the opposition. The Congress president has been summoned for interrogation by the ED in the National Herald case.

The criminalisation of dissent and the suppression of civil liberties have reached unprecedented heights through the use of draconian laws like the Unlawful Activities (Prevention) Act and the sedition clause.  Between 2014 and 2020, in a period of seven years, around 690 cases under UAPA were registered and 10,552 persons were arrested under the provisions of the UAPA.  These include political activists, civil rights advocates, journalists and writers. The sedition clause, section 124A of the Indian Penal Code, is also wielded as a weapon against those who voice their opposition to the regime.  From 2014 to 2021, over 450 cases of sedition were registered.

The media has been subject to intimidation and coercion to prevent it from playing any independent role. Apart from the use of repressive laws against journalists, certain media owners were targeted for economic offences and the agencies let loose on them.  A big part of the corporate media has now fallen in line and have become cheer leaders for the government.

What is sought to be replaced instead of democracy is majoritarian rule. Utilising its majority in legislatures, laws are passed in BJP-ruled states such as anti-conversion laws, prohibition of cattle slaughter of all types and at the central level, the Citizenship Amendment Act.  All these laws have targeted the minorities depriving them of their basic rights.  Such laws provide a legal cover for the vicious attacks on minorities at the ground level by the Hindutva outfits.

It is a sign of the consolidation of the authoritarian regime that none of these threats to democracy are part of the public discourse while discussing the eight year rule of the Modi government.  The editorials of leading newspapers have sought to draw up a balance-sheet of the positive steps and the shortcomings of the eight year rule, as if it is the ordinary business of the government that is to be evaluated. The reality of an overarching project to convert India into a Hindutva authoritarian State is studiously avoided.

The central fact of the eight year rule of the BJP government is the relentless pursuit to reshape the Indian State according to the Hindutva agenda of the RSS.  For this, all the existing parameters of a parliamentary democracy, the role of the judiciary, civil service and the media are being altered and subsumed to serve an insidious authoritarianism.  The entire gamut of economic policies are designed to buttress the Hindutva – corporate alliance which, in turn, fuels the authoritarian drive further.

If there is any lesson to be learnt from the eight years of the Modi regime, it is that democracy and the basic economic, social and civil rights of citizens are in peril from the ruling dispensation. (IPA Service)

During Eight Years Of His Rule, Narendra Modi Has Encouraged Divisive Forces
Posting....