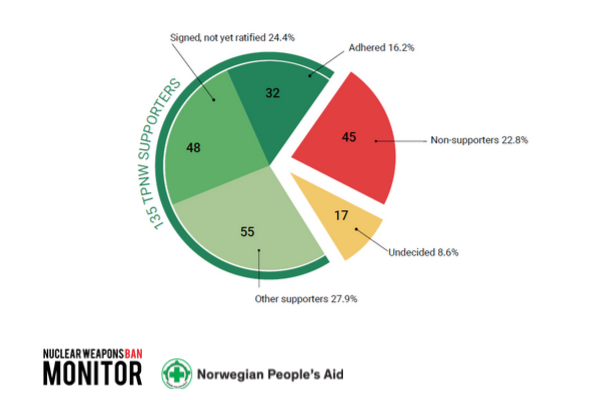 The world is on the edge of a serious threat of use of nuclear weapons by Russia and NATO as both have threatened their use during the on-going war between Russia and Ukraine. Presently there are approximately 13,000 nuclear weapons on earth, many of which are on high alert and could be launched within minutes. Concerned with this threat in mind the members of the state parties who have clearly voted for nuclear weapons abolition and the Treaty Prohibiting Nuclear Weapons (TPNW) along with other organisations working for the cause decided to gather at Vienna in Austria to reinforce their commitment and to chart out an action plan to make the world nuclear weapons free.

Highlighting the humanitarian consequences of the nuclear war it was categorically stated in the first meeting of the state parties on TPNW that ‘the catastrophic humanitarian consequences of nuclear weapons cannot be adequately addressed, transcend national borders, pose grave implications for human survival and well-being and are incompatible with respect for the right to life. They inflict destruction, death and displacement, as well as profound long term damage to the environment, socioeconomic and sustainable development, the global economy, food security and the health of current and future generations, including with regard to the disproportionate impacts they have on the poor in the developing countries and women and girls in particular’.

TPNW passed by the UNO five years back on July  7, 2017 with an overwhelming majority, 122 votes in favour and only one against is a reflection of the voice of all peace loving people who want life on earth to continue and progress. That this happened despite tremendous pressure, allurements intimidation and blackmail by the major nuclear powered states is a big achievement. Study conducted by the IPPNW on climatic impact of nuclear war has made the world community to realise the  fact that even a nuclear exchange between India and Pakistan using 100 Hiroshima sized nuclear bombs would put over 2 billion people at risk.

A nuclear exchange between major nuclear powers could be end of modern civilization built through thousands of years of human labour. It is this realization which is making all saner elements to raise their voice for nuclear weapons abolition. That is why they are quite vocal on the need to impress upon Russia and NATO to commit not to use nuclear weapons during the on-going war because in such circumstances the nuclear weapons could be launched intentionally or by accident!

The Vienna meet made it clear that ‘far from preserving peace and security, nuclear weapons are used as instruments of policy, linked to coercion, intimidation and heightening of tensions. This highlights now more than ever the fallacy of nuclear deterrence doctrines, which are based and rely on the threat of the actual use of nuclear weapons and, hence, the risks of the destruction of countless lives, of societies, of nations, and of inflicting global catastrophic consequences. We thus insist that, pending the total elimination of nuclear weapons, all nuclear-armed states never use or threaten to use these weapons under any circumstances’.

‘It is however a matter of regret and deep concern that despite the terrible risks, and despite their legal obligations and political commitments to disarm, none of the nuclear armed states and their allies under the nuclear umbrella are taking any serious steps to reduce their reliance on nuclear weapons. Instead, all nuclear-armed states are spending vast sums to maintain, modernize, upgrade or expand their nuclear arsenals and are placing a greater emphasis on and increasing the role of nuclear weapons in security doctrines. These resources could be better utilized for sustainable development’. The global arms spending is increasing at a rapid rate and surpassed the two trillion US dollar mark for the first time, reaching $2113 billion in 2021(SIPRI). This takes away resources from health, education, development and other social needs and also reduces security and increases uncertainties in life.

It is a matter of satisfaction that by now 66 countries have ratified the TPNW which came into force from 22nd January 2021.The task now is to bring the nuclear weapons possessing countries into its fold. For this whereas the UNO has to play a proactive role the International Red Cross and Red Crescent Movement, other international and regional organizations, the International Campaign to Abolish Nuclear Weapons (ICAN) and other non-governmental organizations, religious leaders, parliamentarians, academics, indigenous peoples, victims of the use of nuclear weapons (Hibakusha),  as well as those affected by nuclear testing and youth groups all have to be involved to strengthen the voice for nuclear weapons abolition. Science is based on evidence and we have evidence of humanitarian consequences of nuclear war as researched by the IPPNW.

It is also important to continue collaborate at regional level and build Nuclear Weapons Free Zones which could play a significant moral and ethical role.

We have to move ahead with optimism despite several challenges and obstacles. There is no bigger challenge than to preserve and promote life on earth. Every means have to be utilised with a persistent work.  (IPA Service)

Trinamool Congress Has To Depend On Locals In Next Assembly Poll In Tripura
Posting....