Nitish Kumar’s Mission To Unite Opposition Has Many Challenges 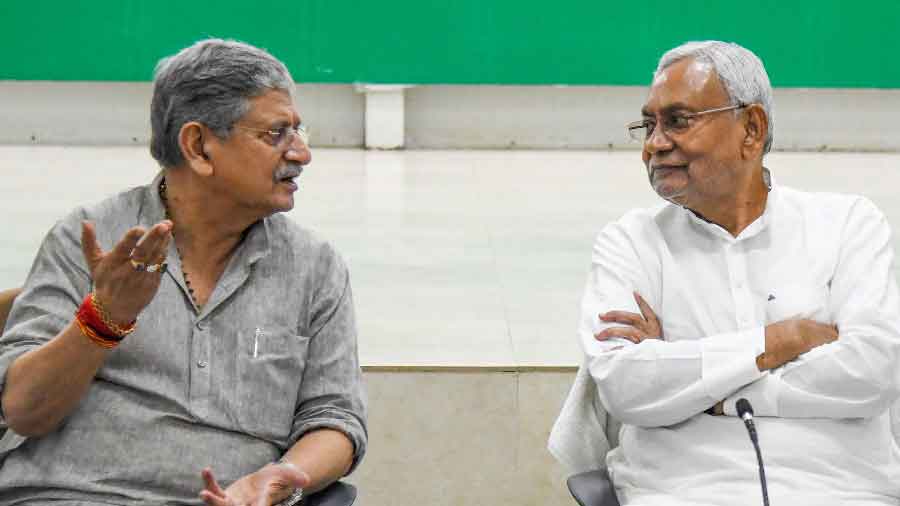 It was more than a coincidence, when the rebel Congress leader Ghulam Nabi Azad was echoing the views of Narendra Modi of rout of the Congress at a rally in Jammu, the veteran Nitish Kumar was telling the people of the country that the BJP under Modi would not fetch more than 50 seats in the 2024 Lok Sabha elections.

This emphatic assertion from Bihar Chief Minister has not only surprised the opposition leaders who are busy trying to find out the rationale behind his claim, the BJP leaders are completely in the state of trans. Those who know of the style of working of Nitish are not averse to subscribing his claim. They hold not to believe him would be more of the nature of inviting peril. Usually Nitish refrains from making such forecast. He also refuses to indulge in any kind of speculation game. Obviously his claim made at the national meet of party members in Patna, just ahead of launching his prestigious mission to unite the opposition, cannot be dismissed outright.

Nonetheless his claim has come with the rider; “If all (opposition) parties fight together, the BJP will be bundled out for about 50 seats. I am devoting myself to that drive (abhiyan)”. This rider ought to be not taken with scepticism. It is a known fact some opposition leaders are working hard to create confusion. Nitish’s statement comes ahead of his meeting the political leaders from across party lines in a bid to forge Opposition unity. He will interact with them for three days starting on Monday.

However it would be utopian to construe that merely bringing the opposition would help achieve their mission. The opposition would be walking into the trap laid down by the BJP leadership if they simply strive to unite. They have to ensure that the vicious design of the BJP to polarise and contaminate the people’ mind and heart is foiled. It is not that Modi or his colleagues are unaware of the potential of the opposition unity and the threat it poses to his leadership. He along with Amit Shah has been working to evolve a mechanism to counter the opposition challenge. They have already divided Marathas and pit one Maratha against other in Maharashtra. Similarly they are contemplating to resort to this strategy in UP and Bihar. They are evolving strategy to vertically split the OBC and Dalits on caste and sub caste lines.

They have hastened up the process of indoctrinating a section of the youths. The think tank of the BJP is of the opinion that proselytising would frustrate the opposition plan to rope in the votes of the common people as these trained cadres would prove to be stumbling blocks and frustrate their efforts. The BJP leaders are sure that the opposition leaders would not succeed in winning back these youths in their rank.

RSS leaders are for capturing the political power through election, but they are not in sync with Amit Shah style of capturing power. Most of the RSS leaders do not like to open their mouth in public view. They hold the view that the vulgar display of money power and muscle power and purchasing the legislators have tarnished the image of Sangh and its affiliates. A senior RSS leader conceded that they would certainly like to win elections, but not at the cost of the image of the organisation. He holds that Nitish would not have left the NDA. It was Modi and Shah who alienated him through their machinations. He argued that Nitish left the company of Lalu Yadav in 2017 and returned to the NDA fold. These two leaders should have analysed his moves in proper perspective. Instead Shah started plotting against him. They planted Nitish’s own man to split his party and dethrone him.

He had one strong and valid question; do these two leaders believe that most of the turn coats who joined the BJP after Modi became the prime minister would remain loyal to the BJP even after it loses the power? Ironically their number is substantial in the party. If they can desert the party which groomed them and taught the basics of politics, they would not hesitate at all, for fraction of minutes, to desert the BJP. These people have no ideological or political commitment towards the party. They have flocked only for enjoying the power. They would completely ruin the party once it loses the power.

In fact the move to split the JD(U) in Manipur has infuriated Nitish to a great extent. Nitish at the national meet of the JD(U) has been quite angry and severely criticised the top leaders of BJP for this. At the meet party chief Lalan Singh accused the BJP of using money power to poach legislators. Angry Nitish sought to know; “Is it proper? Is it constitutional? Is it in line with established norms?” He said “the BJP leaders have been resorting to this everywhere. Hence all parties must unite in 2024 for a positive mandate. When we were in NDA, they (BJP) gave our MLAs nothing. Now they have been won over”.

Posters and billboards have already been put up in Patna sending the message loud and clear that Nitish will play a “national role”. Huge hoarding with a stand-alone picture of Nitish Kumar and captioned “Bihar mein dikha, Bharat mein dikhega” has been also been put up in Patna. The tone and temper of the JD(U) resolution passed is worth taking serious note. It reads; “There is an ‘undeclared emergency’ in the country”. Modi government is labelling the democratic right of dissent as ‘treason’.”

Notwithstanding various challenges that Nitish has been facing, it is the vile campaign launched by media, the Godi Media, that has been creating problems for him. The media guys are busy spreading the impression that Nitish’s mission will fail as the opposition is badly divided on the twin issues; who would be the next Congress president and who would be prime ministerial candidate of the opposition. This is a well-planned campaign launched at the directive of the BJP leadership. The media only a couple of days back tried to raise this issue at the press meet of Telangana chief minister in Patna. The move aims at creating confusion amongst the people that the opposition is badly divided. (IPA Service)