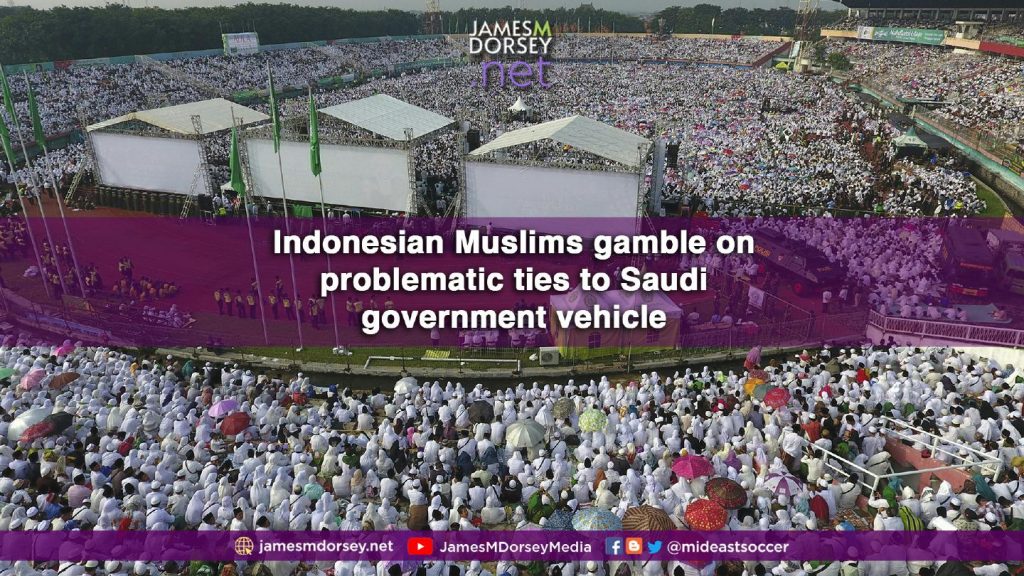 Nahdlatul Ulama, arguably the world’s only Muslim mass movement propagating a genuinely moderate and pluralistic form of Islam, has forged an unlikely, albeit temporary, alliance with the Saudi-controlled Muslim World League.

The League is Saudi Crown Prince Mohammed bin Salman’s chief propagator of a socially less restrictive but autocratic interpretation of the faith that demands absolute obedience to the ruler.

In a bold but risky strategy, Nahdlatul Ulama, the world’s largest Muslim civil society movement with 90 million followers in Indonesia, the world’s largest Muslim majority-country, hopes that the alliance will undercut Saudi and League support for an Indonesian political party associated with the Muslim Brotherhood, the Prosperous Justice Party (PKS).

Against all odds, Nahdlatul Ulama also envisions its Humanitarian Islam philosophy rubbing off on the League as a result of cooperation with the Indonesian group. The philosophy embraces religious and political pluralism, unambiguously endorses the Universal Declaration of Human Rights and advocates reform of what it terms “obsolete” elements of Islamic jurisprudence.

Persuading the League to endorse a genuinely moderate form of Islam would have enormous significance. It would lend the prestige of the Custodian of Islam’s two holiest cities, Mecca and Medina, to Nahdlatul Ulama’s effort to reform Islam. That, however, is a long shot, if not pie in the sky.

More likely, the League sees reputational benefit in its association with Nahdlatul Ulama. The League also probably hopes to co-opt the Indonesian movement to prevent it from becoming a serious competitor for hearts and minds in the Muslim world. Neither group may succeed in fulfilling its aspirations.

Nahdlatul Ulama has a century-long history of fiercely defending its independence and charting its moderation course. At the same time, there is little reason to believe that the League can embrace anything but what Bin Salman authorises. If the last two months provide an indication, Bin Salman and his loyal lieutenant, League secretary general Mohammed al-Issa, can, at best, be expected to opportunistically pay lip service to Humanitarian Islam.

Moreover, the kingdom has long demonstrated its determination, often in cooperation with the United Arab Emirates, to stymie endeavours for political change across the Middle East. Most recently, Saudi Arabia sentenced two women to respectively 34 and 45 years in prison for tweets that allegedly “cause public unrest and destabilise civil and national security” and “tear (Saudi Arabia’) social fabric.”

Last week, a Saudi court committed to death row three members of the Howeitat tribe that was forcibly ejected to make way for Bin Salman’s US$500 billion science fiction Neom megacity on the Red Sea. The three men had resisted the ejection.

Adding fuel to the fire, Bin Salman reportedly appointed Awadh bin Ali bin Ayedh al-Mayshar al-Ahmari, a detective allegedly involved in the cover-up of the killing of journalist Jamal Khashoggi, as president of the kingdom’s counter-terrorism court that handed down the recent harsh verdicts.

Moreover, Saudi Arabia has interpreted freedom of religion as inter-faith dialogue that does not stray beyond lofty statements and high-profile meetings and conferences rather than lifting a ban on non-Muslim houses of worship in the kingdom.

To be sure, Bin Salman has curbed the authority of the religious police, enhanced women’s rights and opportunities, and enabled Western-style entertainment, but that did not entail religious reform. Instead, it amounted to long overdue social change by decree.

As a result, Nahdlatul Ulama stands a better chance in loosening the ties between the League and the PKS than persuading Bin Salman that in addition to social change, genuine religious reform and good governance should be the legs of his efforts to diversify the Saudi economy.

One litmus test of the League’s relationship with Nahdlatul Ulama will be whether Hidayat Nur Wahid, a PKS luminary, remains a member of the League’s Supreme Council. Wahid accompanied Mr. Al-Issa in 2020 to the secretary general’s initial meeting with Nahdlatul Ulama, the first in the League’s 60-year history. Yet, he refused to join Al-Issa in 2020 on his historic visit at the head of a delegation of Muslim scholars to Auschwitz, the Nazi extermination camp in Poland.

To be fair, Nahdlatul Ulama, while virulently opposed to political Islam, has demonstrated its democratic credentials by confronting the PKS politically but not disputing its right to compete in free and fair elections or being politically active within the legal confines of Indonesian democracy.

Sacrificing the PKS is a small price for the League to pay for what Nahdlatul Ulama offers.

As the convener of the Religion Forum 20, a newly created official Group of 20 engagement group, Nahdlatul Ulama has invited the League to co-host next month’s summit of religious leaders in Bali in advance of a meeting of leaders of the G20 that groups the world’s largest economies. Indonesia is this year’s chairman of the group. The faith summit aims to “help ensure that religion in the 21st-century functions as a genuine and dynamic source of solutions, rather than problems.”

Add to that Nahdlatul Ulama’s recognition of the League as a non-governmental organisation even though it is wholly government-controlled and primarily government funded.

The invitation was in recognition of the League’s break with its past as a major vehicle in the global spread of Saudi ultra-conservatism before the rise of Bin Salman in 2015. The invitation also followed an approach by the Saudi government to its Indonesian counterparts requesting that the League have a platform at the R20.

The alliance with the League spotlights Nahdlatul Ulama’s difficulty balancing its domestic objectives with its effort to position itself internationally as the voice of a genuinely socially and religiously pluralistic and tolerant Islam. Partnering with the League in the hope it will pay more than a domestic political dividend entails reputational risk, with the kingdom’s troubled human rights and freedom of religion track record potentially again moving centre stage due to increasingly strained US-Saudi relations. (IPA Service)