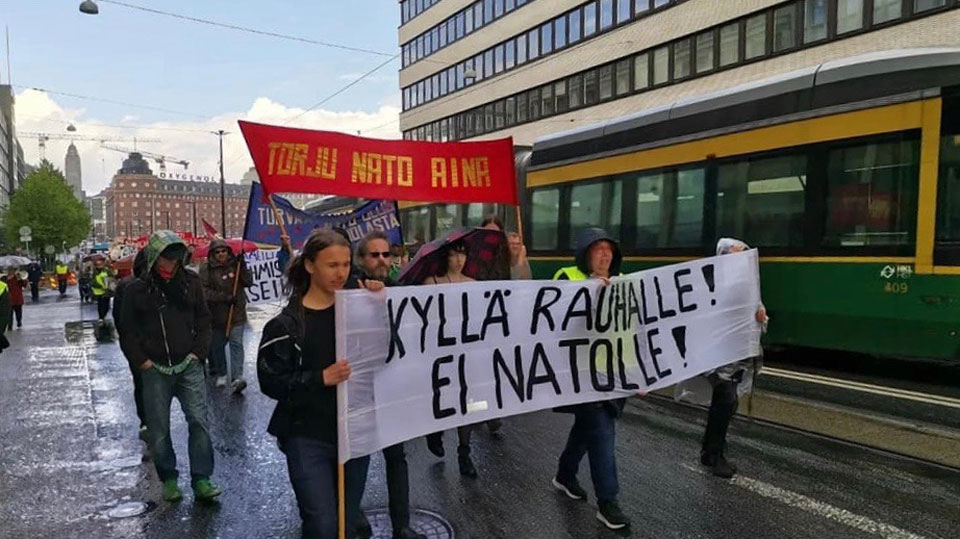 On Wednesday, August 10, President Joe Biden signed the treaty to admit Sweden and Finland to membership in the North Atlantic Treaty Organization (NATO). This follows on the action last week of the Senate, which voted 95 to 1 (with one member voting “present” and three not voting) to ratify the treaty. Earlier this summer, the House of Representatives supported a non-binding resolution endorsing the move (since that chamber has no constitutional role on treaties). It passed 394-18.

Upon some research, one discovers that those in both chambers who voted “no” were right-wing extremists of the MAGA ilk. The only negative vote in the Senate came from Republican Sen. Josh Hawley, whom we know from the famous photo of him giving a clenched fist to the insurrectionists on January 6, 2021.

Not one progressive member of either chamber opposed this expansion of NATO. To say that this was a surprise is to put it mildly. After decades of principled opposition to U.S. military policy—in Southeast Asia, Iraq, and Afghanistan—not one member from the House Progressive Caucus or several liberal senators stood up and opposed the measure. Are we returning to what has been called the “bipartisan foreign policy” that operated with virtually no opposition within the government for nearly twenty years after World War II?

From its founding in 1949, the United States has played the dominant role in NATO. As the centerpiece of the Cold War in Europe, the alliance, originally with twelve members, was created to deter what was perceived to be “Soviet aggression.” It would provide a military response to any challenges to American hegemony and to protect capitalism in Europe. It has since expanded eight times and now counts thirty countries in its ranks. With the exception of Spain, every new member is located between Germany and Russia. (It seems like shades of Hitler’s “Drang Nach Osten”—the drive to the east.)  All the recent additions were formerly part of the socialist world.

One would think that with the dissolution of the socialist systems in Eastern Europe that NATO would quietly go out of existence. That didn’t happen, and, as a matter of fact, since the end of the Cold War the alliance has been involved in military operations in widely separated places: the Balkans, Iraq, Libya, and Afghanistan, among others. Note, by the way, that none of these places are anywhere close to the North Atlantic. It became clear that the alliance re-focused its purpose so that it became a major player in maintaining U.S. hegemony around the world.

And early this year, with the Russian invasion of Ukraine, NATO has bolstered its role as the master of European security. The economic elites of the United States and the European Union are redefining on their terms the power relationships on the continent. A major goal is to cripple Russia’s economic and political influence in Eurasia.

This has had a dramatic impact in northern Europe. Recent developments will turn the Baltic Sea into a NATO lake.

Led by conservative governments (even if they label themselves as “social democratic,” Sweden and Finland have applied to join the alliance. Two of the largest countries in northern Europe, they have long followed policies of neutrality and non-alignment. Sweden declared itself neutral in both world wars and continued those policies up to the present time. Finland, which shares an 830-mile border with Russia, worked out a relationship of mutual respect and non-interference in each other’s affairs with its large neighbor to the east, when it was the Soviet Union or later, the Russian Federation.

Sweden and Finland’s requests for NATO membership and the additional provocative moves by the alliance to the East were met with enthusiasm in the West.

The Council on Foreign Relations, an influential think-tank in Washington, explained what it sees as the benefits of Sweden and Finland’s membership.

“Finnish and Swedish membership is expected to bolster the alliance’s eastern flank and its collective defenses in northern Europe. Perhaps the most significant impact would be the stretching of NATO’s border with Russia…. And Finland and Sweden together would vastly expand the alliance’s presence in the Baltic Sea and the Arctic Circle….”

The article went on to say that “some Western military analysts have said that NATO would almost certainly need basing rights in Finland and Sweden to defend the Baltic states.”

But not everyone in Sweden or Finland approves of their government’s change of policy, however. The Communist parties of Sweden and Finland have both issued statements strongly condemning the move.

The Finnish Communists declare: “We understand the concern caused by the Russian invasion into Ukraine. The attack has been a shock for us too. We condemn Russia’s criminal war and call on Russia to withdraw its troops from Ukraine.

“At the same time, we note that Finland is not under threat of military attack. This assessment has also been included in the [Finnish] Government’s Security Policy Report, which is currently before Parliament.

“Finland’s accession to NATO will not bring more stability to the region, but more tension. Turning Finland’s eastern border into a border between NATO and Russia would bring more armed forces and military activity here.”

In a separate statement, the Finnish Communists recounted the policy of non-alignment and friendship with the Soviet Union, and later Russia, that would be endangered by NATO membership. “Ultimately, it is a question of choice: whether to promote an accelerating arms race or to choose the path towards peace. According to President Kekkonen, Finland is not neutral on the question of war and peace. Finland is on the side of peace against war.”

Their Swedish comrades expressed similar opinions. “Sweden’s accession to NATO is now only a few formalities away and we are in a new reality, where Swedish imperialism has taken the step fully and sought membership in the strongest and most important imperialist alliance of our time.”

The statement goes on to say that this step “entails significant risk not only for the working people of Finland and Sweden, but for the working people of the whole world, as the membership of both countries will mean a further escalation and a further sharpening of the contradictions that characterize the capitalist system.” And it concludes, “The [Swedish Communist Party] notes that the fight against NATO must be principally anti-capitalist. It is a task of the communists to show how capitalism breeds war and that war under capitalism is inevitable and how alliances like NATO are a product of capitalism. The only way to bring about lasting peace is through socialism.”

Sweden and Finland’s application for membership in NATO opens a more dangerous period in the struggle for world peace. It is necessary for all people of goodwill to stand against any expansion of NATO. This should be only the first step in a movement to abolish NATO and all military alliances and the creation of a new international order based on peace and non-interference in other countries’ affairs. (IPA Service)