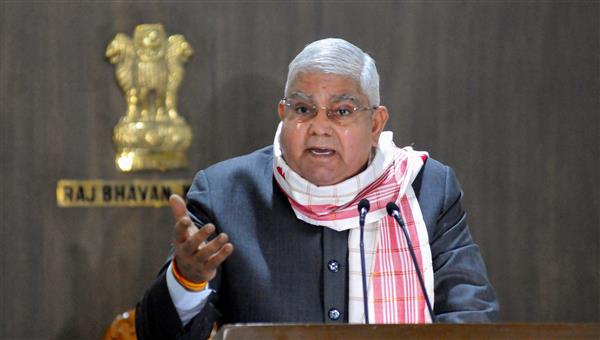 The Vice-President, Jagdeep Dhanker is a quick learner. Within months of joining the Sainik School in Rajasthan’s Chittorgarh, as a class five student, he became proficient in English. “During the summer vacation when he came home, he was asked before visiting government officials to display his skills. For the villagers, he was always the boy who spoke English well”, recalled Randeep Dhankar, new Vice-President’s younger brother.

At Sainik School, he was also the best cadet of Sanga House—named after Maharana Sangram Singh—and was selected to the National Defence Academy. “They (cadets) are highly motivated by the deeds of this brave ruler, and they are also determined to win every battle of their life and are ready to face any challenge to realize their cherished goal in life”, reads the school description.

But Dhankar had other battles in mind. “He did not join the NDA. He wanted to study more”, said Randeep. The younger Dhankar’s career graph was nomadic—he went on to study physics for graduation and pursued a law degree from Rajasthan University.  He later joined Rajasthan High Court. He found his calling in latter. He had a thriving practice and people would “wait in queues” to hire him as lawyer. He was later elected as Rajasthan High Court Bar Association president.

Randeep said his brother is fond of children and loves talking to them. Elder Dhankar,71, has a daughter who is married to a Supreme Court lawyer; had also a son.  Both brothers have gotten married on the same day, though at different locations.

In his mid-30s, younger Dhankar had a thriving practice in Jaipur when country’s politics was on boil. The Bofors scandal, the Sri Lankan civil war and militancy in Punjab were troubling Rajiv Gandhi government. The Defence Minster V P Singh had quit the government to float Janata Dal. Jat Strong man Devi Lal was scouting for leaders, and Jagdeep Dhankar’s name was suggested to him. Dhankar took a large number of his supporters to Delhi to participate in Devi Lal’s birthday Rally in 1989.

The same year Devi Lal asked Dhankar to contest from the Jhunjhunu Lok Sabha seat. He won. However, Devi Lal fell out with V. P Singh and joined with Chandr5asekhar. Dhankar was made a minister in Chandrasekhar ministry.

After losing in the next general elections, he joined the Congress and became an MLA in Rajasthan. His political career thrived in the party, and, at the same time, he resumed to his practice—he became a lawyer in Supreme Court and moved to Delhi.

In 2003, he joined the BJP. As a lawyer he came close to senior BJP and RSS leaders. But it was only when Narendra Modi came to power that the talent of Jat leaders, as formidable administrator, was recognized. In 2017, the BJP had picked Satya Pal Malik—another Jat leader— as Bihar Governor when Nitish Kumar ran the state government with RJD and the Congress. He was later made governor of Jammu and Kashmir. Dhankar, too had tough assignment—as West Bengal governor, he had to take on an aggressive Mamata Banerjee.

Now Dhankar becomes Rajya Sabha chairman when the country’s polity is deeply polarized. His role will be visible during winter session of Parliament, it will take place in new Parliament building, and Dhankar will preside over the first sitting of the house then. (IPA Service)