Israel’s Ukraine Conundrum May Have Implications For Gulf States 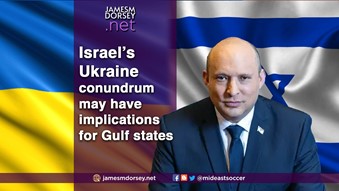 Middle Eastern states see their ability narrow to walk a fine line in the Ukraine conflict. Israel is a case in point as tensions with Iran in Syria and Palestinians in Jerusalem flare, and both Russia and the United States signal impatience with its attempts to straddle the fence.

The United States has cautioned that it would step up pressure on countries that fail to sanction Russia but has yet to single out Israel, home to significant Ukrainian and Russian Jewish communities that include various oligarchs.

In contrast, Russia has made its irritation with the Jewish state evident in recent days.

In doing so, Russia is playing on Israeli fears that Russia could backtrack on its tacit acquiescence of Israeli attacks on Iranian and Hezbollah targets in Syria, stiffen support for Iran, and back Palestinians who are clashing with Israeli security forces in Jerusalem.

Walking a fine line, Israel has rejected Ukrainian requests for arms sales and access to Israeli surveillance technology. However, it has provided humanitarian assistance to Ukraine shared intelligence, voted for a United Nations General Assembly resolution condemning the Russian invasion, and convinced the United Arab Emirates to do likewise. Israel also voted for an Assembly resolution suspending Russian membership in the UN Human Rights Council.

However, Israeli Foreign Minister Yair Lapid’s assertion that Russia has committed war crimes in Ukraine has tipped the balance in Moscow.

In a statement, the Russian foreign ministry charged that Mr. Laipd’s remarks were “a poorly camouflaged attempt to take advantage of the situation in Ukraine to distract the international community’s attention from one of the oldest unsettled conflicts – the Palestine-Israeli one.”

Shortly after that, Russia’s ambassador to Israel, Anatoly Viktorov, told an Israeli television station that Israel and Russia were “still” friends but that Moscow expected a “more balanced (Israeli) position.”

Israeli journalist ZviBar’el noted, ” ’still’ is the operative word, the one that has Israel in a complex dilemma on the Ukraine question.”

To increase the pressure, Admiral Oleg Zhuravlev, the deputy chief of the Russian Center for Reconciliation of the Opposing Parties in Syria, disclosed that a Syrian-operated, Russian-made Buk M2E air defense system had recently intercepted a guided missile fired from an Israeli F-16 fighter jet in Syrian airspace. The disclosure constituted a warning that Russia may no longer tolerate future Israeli strikes against targets in Syria.

Israeli military sources suggested that Israel could step up its attacks in the belief that its window of opportunity in Syria could be closing at a time that Iranian forces may become more predominant in Syria with Russia shifting troops and mercenaries  to Ukraine.

Iranian President Ebrahim Raisi warned this week that his armed forces would not let Israel rest if it took action against the Islamic republic.

“You must know that if you try to take any action against the Iranian nation… our armed forces will not leave you in peace,” Mr. Raisi said during a military parade to mark National Army Day, hinting that Iran could attack Israel’s metropole, Tel Aviv.

Furthermore, Mr. Putin has demanded in a letter to Israeli Prime Minister Naftali Bennett that he transfer control of Jerusalem’s Church of St. Alexander Nevsky to Russia.

The church, located in Jerusalem’s Old City, was supposed to be handed over to Russia as part of a deal two years ago to win the release of an Israeli-American national detained in Russia on drug charges.

Israeli justifications of its attempts to walk a middle ground on the back of efforts to mediate between Mr. Putin and Ukrainian President Volodymyr Zelenskyy are wearing thin as prospects evaporate for a negotiated end to the war any time soon.

Israeli officials acknowledge that when rather than if push comes to shove, Israel will have little choice but to fall in line with the United States and Europe.

Undoubtedly, the UAE and Saudi Arabia are closely monitoring how Israel manages what amounts to a geopolitical minefield.

Like Israel, the two Gulf States have sought to chart an independent course, rejecting US demands that they increase oil production to reduce prices and venting anger at various US policies.

However, in the ultimate analysis, the Gulf states may find that they, like Israel, have fewer options than meet the eye. (IPA Service)

Pandit Bhimsen Joshi Had An Extraordinary Journey In The Music World
Posting....