Fixing Jharkhand Chief Minister May Turn Into Quicksand For BJP 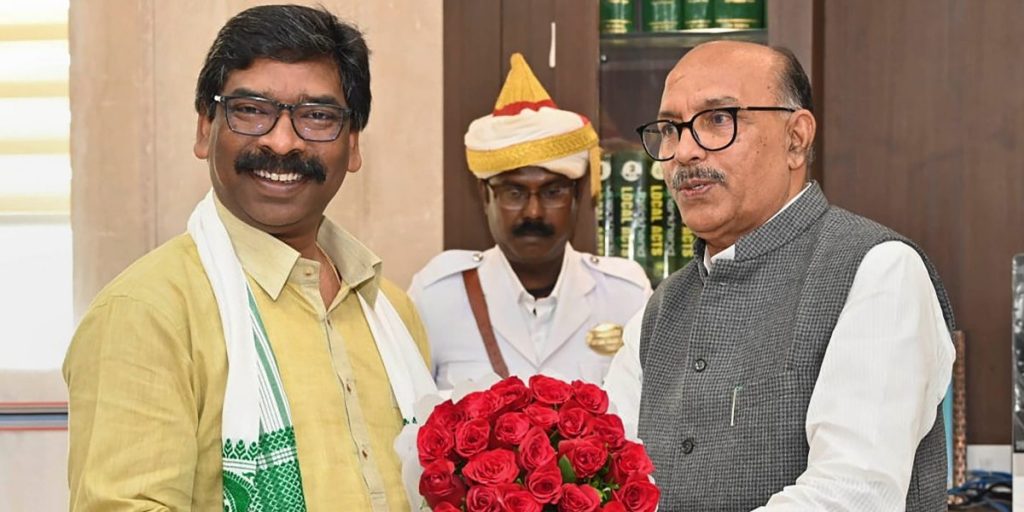 Fixing political opponents by  Narendra Modi government is not a secret by now. Jharkhand chief minister and JMM leader Hemant Soren leading UPA mahagathbandhan government has naturally become their target. Central investigating agencies were unleashed against him which included the Enforcement Directorate (ED). By now, ED has already unearthed a big illegal mining and quarrying network in Jharkhand causing hundreds of crores loss to the government but also irreparable damage to environment. The find is only a tip of the iceberg in which ED has named only Hemant Soren. The greater network of illegal miners and transporters is yet to be unearthed which may lead to even the Modi government’s ministers and BJP leaders.

Illegal mining of coal, stones, and sand are the major illegal activities that one can easily see, since these are being transported on bicycle, motorcycles, and lorries. Thousands of crores in black money is generated through these activities and is shared by the mafia-police-politician nexus. ED has also unearthed, what seems to be a smaller nexus, which is self-evident from the appearance of Sahibganj DSP Rajendra Dubey’s appearance before ED last week, who is alleged to have acted on instruction of Pankaj Mishra – an accused of the illegal stone mining scam – and interfered in the investigation of the ED in the present illegal mining case against the Chief Minister Hemant Soren.

The case is not as simple as this. It is too complex to be handled, because it is not a simple case of fixing a political opponent and leaving all others involved in the illegal mining activities. Illegal mining of coal involves the Union Ministry of Coal, of stone involves Union Ministry of Environment and Forest, of sand involves Ministry of Water Resource, and now ED has found the Union Ministry of Railways is involved in illegal transportation. Many other departments under Modi government and Hemant Soren government are involved which also included surface transport and police and other security forces. Raids are conducted and arrests are made occasionally, but the activities by and large continue, which indicate a very big nexus that what has been unearthed by ED.

Hemant Soren has questioned ED over its claim on illegal mining case just before he was grilled over nine hours by the investigating team on Nov 18. Soren had challenged the claims of ED saying a loss of Rs1000 crore from mining royalties would require eight crore metric tonnes of stone chips to be ferried in rakes and trucks to and from Sahibganj and described the claims of the agency as “sensational”.

Following its investigation against Hemant Soren into the Prevention of Money Laundering Act (PMLA) case, ED has pegged the financial loss due to illegal mining of stone chips at Rs 1350 crore, a figure that has been communicated to the Union Ministry of Environment and Forest. It has also found that 1350 railway rakes were used to transport the illegally mined stone chips from railway stations located at Pirpainti in Bihar and Barharwa and Sahibganj in Jharkhand. Obviously, it could not have been done without a bigger nexus involving the Ministry of Railways and several Ministries in Bihar and Jharkhand, especially when those were transported without any valid documents or challans. The investigation of the illegal transportation by railways was o between 2020   and   2022.

To find this ED had to undertake 19 joint inspections of mining sites with host of officials from various government departments and also used satellite imagery of different sites to show the damage that it says “irreversible environmental damage”. ED says that “the joint inspection has confirmed the instance of huge illegal mining as well as denudation of land and forest area leading to other environmental hazards namely soil erosion, soil runoff, infertility of land, water logging, flattening of hill areas etc.”

ED has further confirmed in its communications that illegal mining activity is a “common feature” not only in Sahibganj but also in other parts of the state. It has also detailed the number of the seized stone crushers, trucks and an inland vessel. As many as 125 FIRs were also filed by Jharkhand Police, the ED chargesheet of March 8 had mentioned, which was made after the department took over the case. Besides, Rs5.34 crore in cash were seized and frozen bank balance of Rs13.32 crore.

In the meantime, Jharkhand CM Hemant Soren has sent a letter to the Union Minister of Railways stating that there is a “nexus” between the Indian Railways and its officials who are encouraging illegal mining in the state. Minerals were being ferried using fake challans and despite several reminders, no attempt has been made to track the freight.

CM Hemant Soren has claimed the state, in a bid to stop illegal mining and its transportation, has integrated various department with Jharkhand Integrated Mines and Minerals Management System (JIMMS) which included state transport, NHAI, road construction department’s toll etc. However, Railways have not integrated its Freight Operations Management System (FIOS) with JIMMS despite several reminders. He has also stated that the state has already apprised this issue with the Central Government’s Niti Aayog and Union Ministry of Coal among others. Soren has also revealed that ED has alleged using 3,531 railway rakes without any challans.

It goes without saying that the whole illegal mining issue should be thoroughly investigated to bring all culprits to book irrespective of their political affiliations to the ruling opposition in the state or to ruling BJP at the Centre. It is all the more important since Modi government is seen working to destabilize the JMM led mahagathbandhan government in the state and therefore targeting only Hemant Soren while keeping silence on many other political leaders including from the BJP in this illegal mining quagmire.

Nevertheless, Jharkhand is heading towards a constitutional and political crisis, in case Modi government decides to arrest CM Hemant Soren, which is most likely to be a case, if Soren refuses to fall in line. Apart from this there are also extortion and money laundering cases linked to MGNREGA scam against officials who are allegedly close aides of Hemant Soren. (IPA Service)