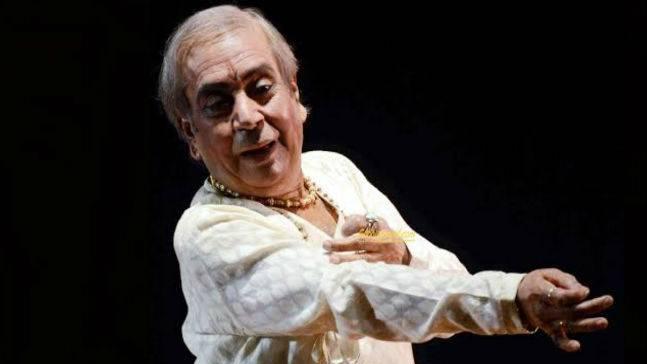 A rare combination of virtuosity and expression, grace and control Birju Maharaj, who became synonymous with Kathak, passed away in Delhi at the age of 83. He suffered from kidney ailments and has been on dialysis for some months. He died from sudden heart attack.

Born Brij Mohan Mishra, Majaraj began dancing when he was four. His father, Achhan Maharaj, was from the prestigious Kalka Bindadin family of Lucknow and the narrow Lucknow lane where they lived would reverberate with the tingle of ghungroos. “My father used to tell my mother, this boy is extremely rhythmic”, he reportedly said in an interview. Birju Maharaj began performing at concerts with his father before his major solo in West Bengal.   While still in school, Birju Maharaj had said, he would use his notebooks to write the bols (tunes) of Kathak, instead of taking down class notes.

Acchan Maharaj passed away when Birju Maharaj was nine. Armed with precise footwork that his father taught him, a young Birju began teaching while also being trained by his uncle, Shambhu Maharaj and Lachhu Maharaj, who was credited with giving him the fluidity of movement that he was famous far. He moved to Delhi to teach at Sanjeet Natak Bharti, Mandi House, and have never looked back.

At 28, Birju Maharaj was one of the youngest artistes to be honoured with Sanjeet Natak Akademy award. He was also conferred the Padma Vibhushan and was the head of Kathak Kendra till his retirement in 1998.

What added to his performance was his immense knowledge of percussion and Hindustani classical music. He could sing the thumri he was to dance to. Soon, almost every musical conference in the country had Briju Maharaj as their star performer. What was interesting about his Kathak performances was that these were not just mythological pieces, he was also contemporizing the stories, even taking bits from his daily life.

Some of his finest performances were with ustad Zakir Hussain. At Birju Maharaj’s 75th birthday celebrations at Delhi’s FICCI auditorium, he showed some rare tunes through Thumris sung by his brother-in-law Pt Rajan and Sajan Mishra. Birju Maharaj’s intricate footwork , superb control of stamina almost defied his age.

Birju Maharaj also contributed to Hindi film choreographies. Be it the piece he choreographed for his student Saswati Sen in Shatranj ke Khiladi  (players of the game of chess) or for Madhuri Dixit in Dil to Pagal Hai  and Devdas, and  for Deepika Padukone in Bajirarao Mastani .

As Guru, Birju Maharaj inspired generation of dancers to take up Kathak. The training was rigorous, “until it got into your blood stream”, as Shovana Narayan, who was trained by Maharaj once said. His other students include Nisha Mahajan and Aditi Mangal Das, among others.

Mangaldas was a young girl learning Kathak in Ahmedabad, when her Guru, Kumudini Lakhia and her aunt, writer and activist, Pupul Jayakar, recommended that she learn from Maharaj, “the mouth of the river”. “You didn’t learn only in his class room. It was an ongoing learning process, which became a way of life. His sense of observation—of rhythm, of poetry was so phenomenal. It’s incredible how all this translated into dance, making him a larger-than-life figure”, said Mangaldas. (IPA Service)

RSS Desperate To Find Out The Reasons For Desertion Of Dalits From BJP
Posting....