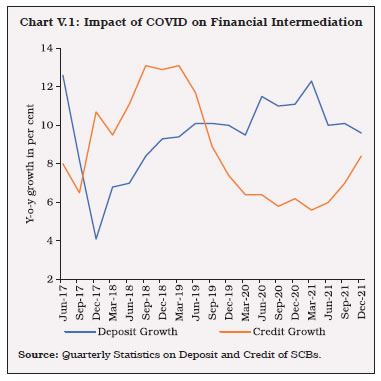 India finds itself in an unenviable position. Choosing an option has become ever more difficult. Financial sector crisis continues and the country has been suffering from negative shocks to credit growth which pushes up the macro vulnerability and increases downside risks to the growth in GDP. However, as the economy recovers from the pandemic, it needs a strong GDP growth at much higher level and will need to be sustained over the near and medium term to achieve many of its development goals. But higher GDP cannot be achieved without higher credit growth, and the whole situation becomes cyclical, a vicious one.

India’s financial sector have faced many challenges in recent decades, including a rapid increase in non-performing assets (NPAs), referred in this paper as NPLs, after the global financial crisis (GFC) and the 2018-2019 run on non-banking financial companies (NBFCs).

Credit growth has been weak for some time, with a large, negative, and persistent credit to GDP gap since 2012. Just as the balance sheets of the financial sector started to gradually improve, the COVID-19 shock hit the economy, raising concerns about a new wave of NPLs and corporate defaults. At the same time, real GDP growth averaged 6.7 percent   from  2011 to 2018, before moderating to 3.7 percent in 2019 (NBFC crisis) prior to the COVID-19 crisis.

“On a cyclical basis, a negative shock to credit and leverage, or a rise in macro vulnerability, all shift the distribution of growth to the left, with lower expected growth and higher negative tail risks, implying lower expected growth and higher downside risks. Over the long term, the results indicate that higher credit growth, arising from better capitalized banks with lower (Non-Performing Loans) NPLs, is associated with higher GDP growth,” the paper has concluded.

How cyclical financial conditions affect GDP growth was examined using a growth-at-risk (GaR) approach and assesses and how financial conditions and credit risks could be associated with expected GDP growth going forward. Long-term growth, relationship between bank balance sheets, and credit growth was examined using bank-level panel regressions for both public and private banks accounting for about 85 per cent of total banking sector assets of the country.

GaR analysis finds higher credit and lower NPLs to be associated with higher GDP growth in near and medium term, and therefore, more favourable credit conditions are found to be particularly important during periods with low growth.

The long term analysis result confirmed that in India, at least for private banks, the level of capitalization is strongly correlated with credit growth. The relationship for public banks appears to be much weaker. Additionally, it is when those banks which are better capitalized extend more credit that India observes higher real GDP growth, but only on the condition that these banks do not have excessive NPLs.

During such period of lower growth, the paper has recommended policies to support credit growth and to strengthen balance sheets. In this regard, policy responses such as credit guarantee schemes for MSMEs, loan restructuring scheme f or COVID-affected borrowers were important to support credit growth and cushion the economic impact of the pandemic. Going forward, further efforts to make support measures even more targeted and facilitate the exit of non-viable firms may be warranted. In addition, financial regulators should continue to ensure that loans benefiting from COVID-related restructuring schemes are closely monitored and properly provisioned for, to safeguard the health of financial sector balance sheets and help support the economic recovery.

The recommendations also include ensuring adequate credit growth at the bank level, improving bank balance sheet, particularly through reducing NPLs, and boost capitalization, especially for private banks, either through new equity issuance or reducing cash dividends. For public banks, which may have different motivations for lending, appear to be less affected by their capital position in terms of their ability to lend. Given the difference between the private and public banks, efforts to better understand the drivers of this difference should be carried out and address it, which could help promote economic growth. (IPA Service)

Uddhav Thackeray Is Right In Calling For Fresh Polls In Maharashtra
Posting....