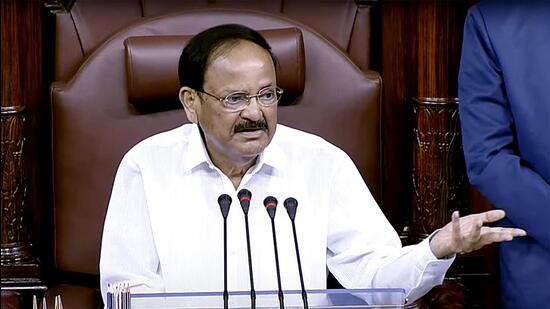 “My operation depends on your co-operation, otherwise there will be separation.” As Venkaiah Naidu, 73, demitted office as Vice-President of India on August 10, the Rajya Sabha of which was ex-officio Chairman, will be poorer for his quick wit and puns, many of which elicited laughter and served briefly unite the Treasury benches and Opposition benches at a time of brief discord and distrust between the two sides. His recent “operation-cooperation-separation” response was in response to frequent disruptions in the Upper House by Opposition members seeking discussion on price rise.

Naidu, though seen as a reluctant Vice-President, had plunged headlong  into  his Rajya Sabha role, playing referee with elan even if, according to the Opposition, he blew the whistle far too often on them.

While his critics say that despite his constitution role, Naidu’s heart never stopped beating for the BJP, a party he served for decades before becoming Vice-President. They agree that he is among the most amiable chairpersons Rajya Sabha has had, with friends on both sides of the aisle. The annual lunches he hosted— with a spread of south Indian seafood and Hyberabadi dishes—is one of the most awaited events in the capital’s political calendar, with leaders across the parties in attendance.

Born at Chavatapalem, Nellore district of Andhra Pradesh on July 1,1949 , Naidu had joined the RSS and was a member of the ABVP by the time he joined Andhra Pradesh University for a Bachelor’s degree in law. His electoral career began in 1978 when he won as a Janata Party MLA from Udayagiri. In 1983, he won on BJP ticket from the same constituency, and by 1988, went on to become President of Andhra BJP. In 1993, he moved to the national scene after becoming general secretary of the party.

In the BJP, Naidu was seen as L K Advani’s protégé. After the 2002 communal riots in Gujarat, it is widely known that the then Prime Minister Atal Behari Vajpayee wanted Narendra Modi to resign as Gujarat Chief Minister, but Advani was against his removal. Sources say it was Naidu, as BJP President, who conveyed Advani’s decision to Vajpayee. As he did so, with “trembling hands”, Vajpayee half-heartedly agree.

But a decade later as winds of change started blowing in the BJP, Naidu effortlessly transformed into one of the most ardent supporters of Modi.

While his contemporaries Arun Jaitley and Sushma Swaraj largely refrained from waxing eloquent on Modi, Naidu was always effusive. Moving the political resolution during the BJP’s national executive meeting in March 2016, Naidu had described Modi as “gift of God to India”, a “messiah of the poor” a “decisive leader” of developing India”.

Naidu was in his fourth term as Rajya Sabha MP when he was nominated by the party for the post of Vice-President. As the BJP’s best known face from the South, Naidu’s vast Parliamentary experience, impressive stature as a leader and his relatively easy-going nature had gone in his favour.(IPA Service)

International Chess Olympiad In Chennai Was A Great Event For India
Posting....