International Chess Olympiad In Chennai Was A Great Event For India 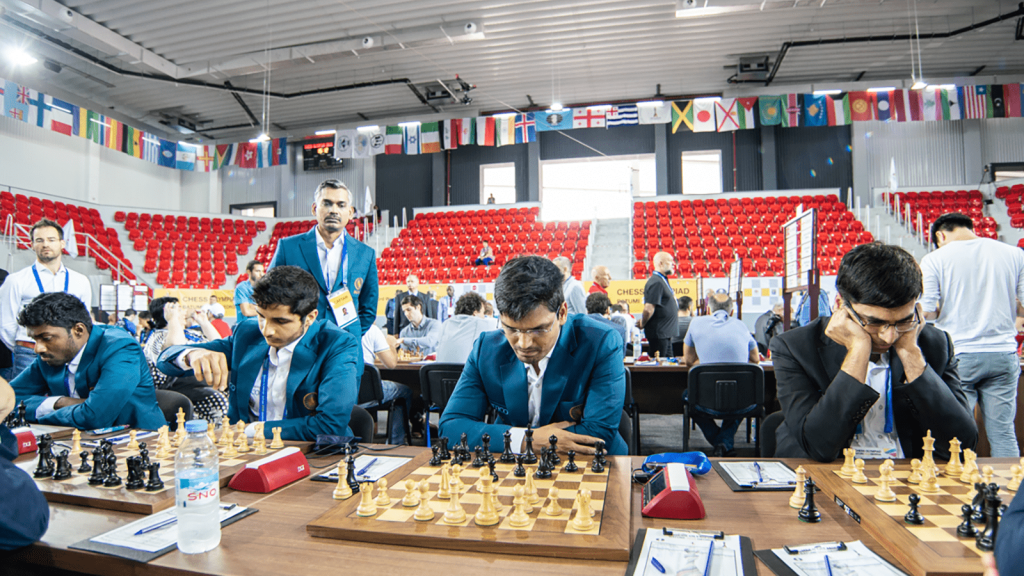 The story is about a child prodigy living in the 1950s orphanage and how she goes on to challenge the reigning international Grandmaster and wins. It mesmerized even those ignorant of the Chess game and made a massive boom in the US and other countries. The Queen’s Gambit refers to a chess opening parlance that evolves into a strategic game. This opening is still a favourite for every elite player.

Chess suits people of all ages and can be played anywhere, anytime. After Covid, Chess has transformed into a sport that commands a massive online following across YouTube and Twitch streams. In recent times, Artificial Intelligence has been a revolutionary phenomenon that has undoubtedly changed the landscape of Chess.

So it is not surprising why Chennai’s international Chess Olympiad which ended on August 9  created a global chess craze this year. Already Chennai is the chess capital of India as it has encouraged for decades young talents, including the much-celebrated Viswanathan Anand. Of the 73 Grandmasters, Tamil Nadu roughly has 40 percent of the total Grandmasters in India. Traditionally, Chennai had seen the birth of several Chess clubs. Tamil Nadu government’s decision in 2012 to make Chess compulsory in all public schools has also led to the growth of Chess in the state.

How did Chennai come into the picture? Russia was to host the 2022 Olympiad, but that changed with the invasion of Ukraine. Then supported by the All India chess federation, the Tamil Nadu government staked a claim to host the event and won.

In 1961, Manuel Aaron won the country’s first International Master’s title. Viswanathan Anand became the first Grandmaster from India, Subbaraman Vijayalakshmi, the first Woman Grandmaster in 2001, and Praggnanandhaa, the second youngest Grandmaster in the world, in 2016.

There are many chess queens in India. In 1974, the federation promoted the Women’s National Championship, and the Khadilkar sisters -Vasanti, Jayshree, and Rohini held sway for the next decade. Koneru Humpry, the country’s most accomplished woman player, is the world’s number four. The women’s A team also has Harika Dronavalli, who is heavily pregnant.

Prime Minister Narendra Modi declared the Olympiad open last week, pointing out it was only fitting that Chennai was hosting the event. Tracing history, “In Tamil Nadu, many temples with sculptures portraying different sports… You will even find a temple – Chathuranga Vallabhanathar temple in Tiruvarur – where it is believed that even God played Chess with the princess. So it is natural that Tamil Nadu had a strong historical connection with Chess.”

Chess is a Sanskrit word (chaturanga) that refers to the army’s four main sections: chariots, elephants, cavalry, and infantry. Historically, Chess came from India and then spread through Europe. Our mythology references date back to Mahabharata and Ramayana.

Legend has it that Lord Shiva called Chathuranga Vallabhanathar won a chess game after defeating the princess Rajarajeswai (believed to be an incarnation of Parvathi) and married her as his prize. The temple documents show that Chess was popular in Tamil Nadu even 1,500 years ago.

Another myth was King Ravan first invented Chess to divert his mind from the war with Rama. He used to play the game with his wife.

The other story is that an unnamed sultan of India was bored and sought new entertainment. Ultimately a poor man came and showed him a game similar to Chess. He asked for a grain of rice for each square and eventually became a rich man.

Research shows that the complex game requires planned moves. Chess gives a big mental boost. It develops perspective, deepens focus, enhances creativity, protects against dementia, and boosts planning skills. Experts also believe Chess improves children’s thinking skills and concentration. Some studies have even found that Chess can help those who have suffered a stroke to recover.

After covid, many have started playing mind games, and Chess is one of them. The Chess olympiad    has imparted a fresh dynamism among the cou8ntless chess  clubs in India.It is hoped that many more grandmasters from India emerge in the near future.(IPA Service)