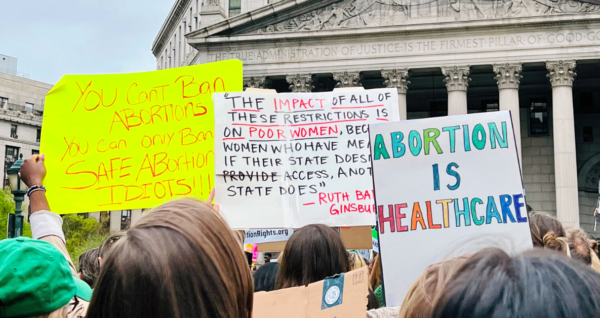 BOSTON: Last month, the Supreme Court of the United States overturned the Roe v Wade judgment of 1973. SCOTUS issued its decision with regards to the case Dobbs v Jackson Women’s Health Centre (Mississippi). Abortion rights will cease to be a federal affair from now and it will be left to the individual states to decide. States like Florida, Texas, Arizona, and Mississippi have already passed or introduced strict laws banning abortion after six to fifteen weeks of conception, thereby criminalizing abortion. At least 26 states, all governed by the Republicans, are ready to follow suit.

The Supreme Court’s decision is an assault on women’s rights, human rights and democracy that would have a damaging effect around the world. The ruling has also signalled a return to US obstructionism on sexual and reproductive health rights advocacy globally and a renewed effort to withdraw US funding for reproductive healthcare. The decision reverses nearly 50 years of legal precedent in US, explicitly ending federal constitutional protections for abortion, diminishing the rights of women, and threatening their access to reproductive care.

Ending a pregnancy is a common but difficult decision that millions of women and girls make: every year a quarter of pregnancies end in abortion. When undertaken by a trained healthcare provider in proper sanitary condition, abortions are one of the safest medical procedures available, safer even than childbirth. Restrictions do nothing to prevent or reduce number of abortions; they only force people to seek out unsafe abortions shrouded in unwarranted illegality. WHO estimates about 25 million unsafe abortions took place around the world which have many fatal consequences. So much so that unsafe abortions are the third leading cause of maternal deaths around the world. A recent study estimates that abortion ban in US would lead 21% increase in number of pregnancy-related deaths, with 33% of that among women of colour.

“Over the last 25 years, more than 50 countries have changed their laws to allow abortion, for the safety of women’s lives and health. America, which boasts of being the most advanced country in the world and a champion of human rights, walks back 50 years on abortion which includes Human Rights. The Supreme Court’s decision not only wreaks untold harm on women and families in the US only, it could have reverberating damage around the world, rolling back  advances in other countries and emboldening anti-choice movement,” says LalehIspahani, co-chair of Open Society, US.

The Supreme Court decision treads upon stealthily on Human Rights. Human Rights are the rights to life, to non-discrimination, to be free from torture and cruel and inhuman degrading treatment, and to privacy, among others. These rights are recognized in international human rights treaties ratified by the USA. Access to safe and lawful abortion services is firmly rooted in the right to life. Human rights law clearly spells out that decisions about your body are yours alone, a tenet known as ‘bodily autonomy’. Amnesty International recognizes the right of every woman who can become pregnant to abortion.

The health issues related to abortion ban are bound to be felt in American society enormously. Bodily autonomy interacts with self-determination across society, including participating in the economy.

The socio-economic impact of Supreme Court’s decision would be enormous. Women in workforce and their role as caregivers at home, are essential to our economy. The verdict will severely impact women’s ability to take care of themselves or the children they have now or in the future. Approximately 60% of women in America say the reason they would seek an abortion is to take care of the children they already have, according to the study in the journal to the Pediatrics. “This is an issue that affects women’s own decisions making about their lives and their families.”, says  Dr. Diana Foster, professor at California University and author of the landmark “Turnaway Studies”, which  examines the effects of  unwanted pregnancies on women’s lives. To take that decision away from individual people and instead let the government decide when they have a baby, the outcomes are worst. The fact that women continue to shoulder the majority of caregiving duties may be a contributing factor prompting 43% of highly-qualified working mothers to leave their jobs at some point, according to the Harvard Business Review.

The women who are unable to get an abortion were three times more likely to be unemployed after six months as compared with those who were able to get an abortion, according to the American Journal of Public Health. The Turnaway Studies research found that those women denied an abortion, who had to carry an unwanted pregnancy to term, had four times greater odds of living below the federal poverty lines. It is especially important to note that “people who seek abortions are disproportionately people of colour; so it is already hurting a population that tends to be systematically disadvantaged—both economically and socially”, says Dr. Foster.

Anti-abortion groups in America argue that the US economic system is broken if women feel like they have to choose between sacrificing their education and career and sacrificing their children. Overturning Roe will hurt both the state economics and the federal GDP.A study from International Policy Centre found that state economies in US already lose billions due to abortion restrictions—an issue that’s likely to now grow “exponentially”. Denial of abortion have very negative economic impacts, including reduction in participation in labour force, decreasing earnings, and increasing rates of poverty and debts. Those effects are felt at the broader societal level. Abortion restrictions cost state economies an estimated $ 105 billion per year and getting rid of all state-level restrictions would increase national GDP by nearly 0.5%, the IWPR study found based on data from  2020, when there were fewer restrictions than now.

Texas, for instance, suffered $14.6  billion in economic loses even before it enacted a six-week abortion ban, IWPR found, while Missouri’s GDP would raise by 1.02% if it weren’t for abortion restrictions. IPWR president Nicole Mason pointed to factors like more people now having to take time off work to travel to other states for abortions, which will increase economic impact on workplaces. “When you think about women having access to reproductive healthcare services, including abortions, you have to understand that is good for women workers—and good for the economy overall,” Mason tells Forbes. “The numbers don’t lie,” she adds.

An amicus brief led by Catlin Kwonles Myers, along with 154 renowned economists, details   how abortion access expansion in the 1970s was directly linked to increased educational attainment, greater labour force participation, and higher earnings. But the US Supreme court completely ignored the report and gave their verdict purely on partisan considerations.

Apart from socio-economic, healthcare or other related issues, the verdict has screwed up the socio-political body of America in such a way that it will not be imprudent to guess that the highest seat of judiciary in the country, emboldened  by  their success in pulling back a very important and progressive ruling preceding 50 years, and backed by rejuvenated far-right Trumpist Republican Party, will surely venture to overturn many other progressive laws which were achieved through social and political movements of many years, such as same-sex marriage and LGBTQ rights, healthcare and educational rights, etc.

Democracy is on a dangerous slide in America. A captive conservative judiciary is gradually trying to encroach upon the executive power, while the three divisions of powers in the Constitution – legislative, executive and judiciary – are blurring their roles, trespassing into one another. There is a deliberate attempt to reinterpret the American Constitution by the far-right conservatives, including the partisan majority in the Supreme Court. It seems for now that the Democratic party leadership is now showing enough capability to successfully resist the onslaught. Are the American people listening? (IPA Service)