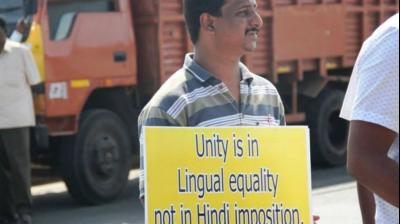 The Modi government has been trying to impose Hindi as the official language through various means.  The recent instance is the report of the Committee of Parliament on Official Language headed by the union home minister, Amit Shah.  The 11th volume of the committee’s report has been presented to the president of India.

One of the recommendations in the report is that: “Medium of instruction and other activities should be Hindi in all technical and non-technical institutions in the country and use of English should be made optional”.  This is with reference to central institutions ranging from IITs, central universities and Kendriya Vidyalayas.

If this is implemented, it would mean that students of non-Hindi background would have to qualify in the entrance examinations for these institutions in Hindi and also adopt the Hindi medium of instruction.  This would be patently discriminatory against those whose mother-tongue is not Hindi.

This, however, does not solve the problem.  Central universities or IITs in Hindi-speaking states would only admit students who are equipped for the Hindi medium of instruction. Thus these central institutions, which have a pan-India character, will now be open only to Hindi-knowing students. Thus, the Delhi IIT or a central government university like the Banaras Hindu University would become out of bounds for non-Hindi students. The same would apply to the faculty.

If central educational institutions situated in the non-Hindi states adopt the state/regional language as the medium of instruction, then it would serve only students of that state or region.  This would mean that the all-India character of these institutions would be nullified.

A democratic language policy would require that all the 22 languages listed in the Eighth Schedule as national languages are treated on an equal basis. The recommendations of the official language committee in other matters too militate against this equality.  For instance, the committee has recommended that more than 50 per cent of the budget of government advertisements should continue to be allocated to Hindi language ads.

To demand that the main language of a state should become the medium of higher education and administration in that state is the right step. This should be applicable to state-level institutions. Hence it will be Hindi in Uttar Pradesh, Tamil in Tamil Nadu and so on. But to give primacy to Hindi in central educational institutions is to discriminate against other national languages.

Amit Shah, as the union home minister, has been consistently pushing the idea of ‘One Nation, One Language’. In 2019, while delivering his first speech on Hindi Divas, he had stated: “India is a country of different languages. Every language has its own importance. But it is absolutely essential that the entire country has one language that becomes the identity of the nation in the world.  If there is any language that can tie the whole country in one thread, it is the most spoken language of Hindi”.

This is in line with the RSS slogan of ‘One Nation, One Language, One Culture’.  In a multi-lingual, multi-cultural, diverse country like India, the efforts to impose Hindi will only lead to discord and disunity. (IPA Service)