Unemployment In India Today Is Worse Than Any Year Since Independence 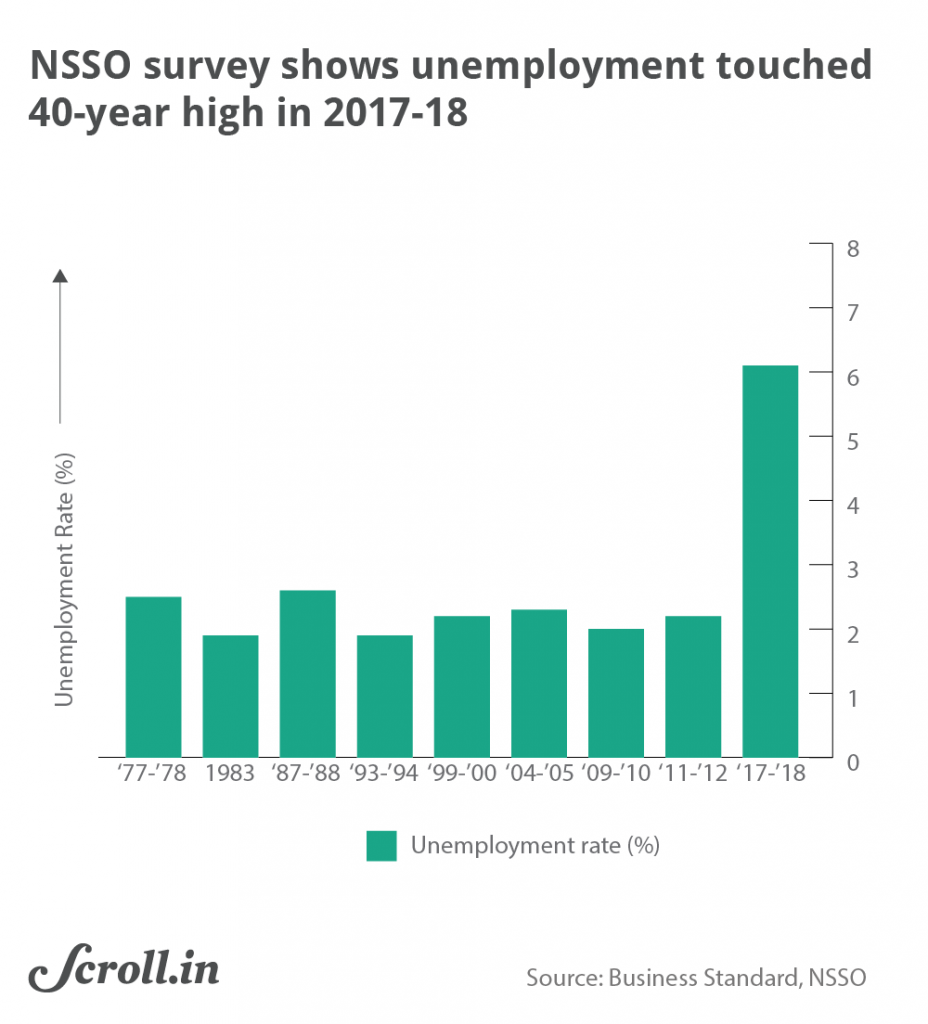 The craftiness of imperialism is boundless. In several countries of the world at present there are neo-fascist governments, propped up by their respective big bourgeoisie (all aligned to globalized capital), and implementing neo-liberal policies with their characteristic ruthlessness; in many other countries, there are neo-fascist outfits attempting to get into power by promising to their big bourgeois patrons that they would do the same if in power. A neo-liberal-neo-fascist alliance in short has become quite pervasive.

Such a neo-liberal-neo-fascist alliance has become necessary because the crisis of neo-liberalism has made the usual breezy assurance no longer credible, that “everybody would eventually become better off through neo-liberal policies”, which had sustained such policies for so long: when the economy becomes stagnant, “trickle-down” scarcely carry any conviction. Harsher measures are needed therefore to keep the working people suppressed and these have to be camouflaged by fomenting interreligious, inter-ethnic, and other similar conflicts. This is where neo-fascist outfits come in; they revel in fomenting such conflicts.

It is not difficult for the Bretton Woods institutions that control the intellectual discourse of most third world countries in matters of economic development, indeed the discourse on development economics in general, to promote the suggestion that neo-fascism alone is what lies behind the crisis; and this suggestion finds ready takers among the radical intelligentsia which is, quite justifiably, opposed to the neo fascists anyway. In fact, blaming the crisis exclusively on neo-fascism becomes, quite understandably, attractive even to a section of the Left, since the neo-fascist promotion of hatred against a hapless minority, its constriction of democracy, and its attack on the working people, make the channelisation of popular anger against it a matter of the utmost priority.

In this process, however, since neo-liberalism is kept hidden from view, even if neo-fascist elements are thrown out of power, the way remains clear for a new liberal, non-fascist, government to come to power, which continues to follow neo-liberal economic policies. But since such a new government too cannot overcome the crisis for reasons we have discussed, the way remains open for the neo-fascists to return at some later date when the people have gotten tired of the liberal government that succeeded the neo-fascist one. Thus, politics is sought to be pushed into a situation where the government alternates between neo-fascist and liberal political formations, both committed to neo-liberalism; and the working people continue to suffer the horrors of economic crisis.

India offers a classic example of this phenomenon. The current Modi government had come to power in 2014 when the people had just started experiencing the economic crisis, by putting the entire blame for the crisis on the weakness and on-performance of the previous liberal government of Manmohan Singh and making no reference to neo-liberalism. On coming to power, the Modi government pursued neoliberal policies with a vengeance, even as the crisis got intensified, unemployment kept increasing and the people’s incomes kept falling. Their growing misery is shown by the fact that the National Sample Survey (NSS) revealed, according to newspaper reports, a 9 per cent decline in the per capita real consumption expenditure in rural India between 2012-13 and 2017-18, a finding so startling that the government prohibited its publication, and suspended the NSS in the form in which it had been conducted since its very inception shortly after independence under the stewardship of the great statistician P C Mahalanobis.

The pandemic made matters worse. But even after the abatement of the pandemic, unemployment today is worse than in any year since independence, inflation is raging with a fury not seen in recent years, and the slide of the exchange rate has brought the rupee to its lowest level ever against the dollar. Popular protests against economic hardships are rising, but the bulk of the protestors put the blame exclusively on the economic policies of the Modi government, without any reference to the neoliberal regime. The Modi government no doubt is culpable for the acute and unprecedented economic crisis, but its culpability lies primarily in its enthusiastic and ruthless adoption of neo-liberal policies.

True, it has also implemented some utterly absurd and mindless measures on its own, such as the sudden demonetisation of almost 85 per cent of the value of the currency in circulation. This brought acute hardship to people and crippled the petty production sector, without an iota of benefit to the economy; but it can hardly explain the enormity of the current economic crisis. Likewise, the government implemented the Goods and Services Tax which also dealt a crippling blow to the petty production sector. But the GST was promoted by the World Bank, and it had been mooted by the Manmohan Singh government itself; all that Modi did was to proceed along that route with its usual ruthlessness. The crisis however can scarcely be explained by the GST, even in conjunction with demonetization.

Herein lies the immense craftiness of the present imperial arrangement. For imperialism the situation is akin to “Heads I win, tails you lose”. As long as the going is smooth, the credit for it goes to the neo-liberal regime, which is claimed to have accelerated GDP growth rates; but when a crisis hits, the blame for it is laid at the door of neo-fascism with which the neo-liberal regime has hitched up. This hitching up thus plays a dual role: first, it bolsters the neo-liberal regime by pitting the majority against some hapless minority, by stoking hatred on grounds of religion or ethnicity, so that behind this smokescreen the corporates can be given even larger concessions; and, secondly, it has an easy scapegoat available when the people revolt.

In Marathi playwright Vijay Tendulkar’s play Ghasiram Kotwal, the wily Nana Fadnavis, minister of the ruler of Pune, uses a tyrannical henchman to carry out all the oppressive measures of his administration; but when the people finally rise up in revolt against these measures, he sacks this henchman and earns popular acclaim. Neo-fascists in the third world are like this henchman Ghasiram: they do immense damage to society when in power, through their fascistic measures even as they uphold neo-liberalism; and they can be dispensed with when the people get angry without any damage to neoliberalism.

To look at neo-fascism without its economic moorings, to ignore the fact that the neo-fascist government is actually based on a neo-liberal-neo-fascist alliance, and, in general, to look at politics as a self-contained sphere unconnected to the economy, is a liberal trait that the Left must not imitate. (IPA Service)

Speeding Up Hindutva Programme Before 2024 Polls, Is Backfiring
Posting....