Speeding Up Hindutva Programme Before 2024 Polls, Is Backfiring 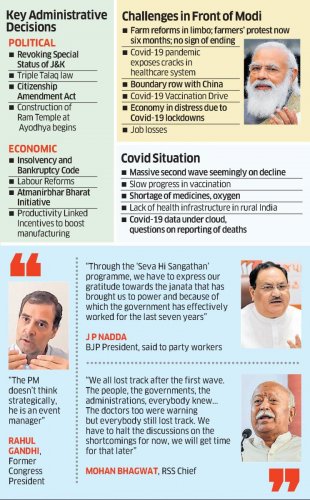 It would be simply an act of naiveté to believe that the BJP spokesperson Nupur Sharma has dented the image of Narendra Modi or his government.  It is Modi and his lieutenant Amit Shah who had prepared the backdrop and handed over the brief, to malign the Muslims, to their subjugates.

Of course there are many instances, but the two main incidents that eroded the credibility of Modi and smearing his image testify his political immaturity and also his gaucheness in rewriting the history of the New India under his leadership. Second incident which smeared his image and exposed his inability to write a new history has been the revolt of the students and youths against his much vaunted scheme Agnipath. Till the anger of the youths got its manifestation on the streets across the country, especially the Hindi heart land against the military scheme, he was revered as the Hindu Yuva Hridaya Samrat (king of the Hindu youth). But ironically the same youth which was supposed to be the flag bearer of his ideas and ideals has challenged him and questioned his policies and ideas.

The insinuation of Prophet by Nupur Sharma might have taken an ugly turn but  the restrain and maturity  shown by the Islamic countries salvaged the situation from going beyond control.  Unfortunately the government which intends to write a new history is still not showing that amount of perseverance and restrain which is needed. It was expected that after the protest by the Islamic countries, the Modi government and the BJP will behave with the dignity expected of them as representatives of this great country. Unfortunately in their quest to rewrite the history both the leaders have not been restraining and goading their rank and file and they continue to behave in most erratic and irresponsible manner.

On Thursday around 100 Vishwa Hindu Parishad and Bajrang Dal members violated ban on assemblies at several places in Uttar Pradesh, holding dharnas in protest at the stone-throwing demonstrations against Nupur Sharma’s remarks. They assembled at Gurudev Crossing in Kanpur and chanted the Hanuman Chalisa and shouted “Jai Shri Ram” and “Pattharbazon hosh me aao (Stone-throwers, come to your senses)”.

The RSS and BJP cadres are organising protest rally against her suspension and demanding reinstatement. A word from Modi would have been suffice to keep them under check.  It is not beyond comprehension as to why he or Shah have not been agile to the situation. The outrage in the Muslim countries has not subsided. Some of them are contemplating to take against the Modi Bhakts. The two leaders are so obsessed with the idea of turning India into Hindu Rashtra that they are ignoring the tell-tale signs appearing on the horizon.  There is denying the fact that the apathy of the rulers has brought down India’s standing in the world and caused grievous damage to our image as a liberal, secular democracy.

Speaking on the occasion of a book release Shah had said; “history cannot be created by governments” and urged society to take the initiative to present history in its true form”. As a true follower of Modi and Shah, the lady picked up the right signal. She attempted to correct the history taking the suggestion of Shah; “It is a fact that some have distorted history. They have written whatever they had to. But who can stop us (from writing it on our own)? Nobody can stop us. History is not created by governments, but it’s built on true events,” as the factual clue. Shah has been urging writers and filmmakers to work on “bringing out the truths”. Nupur simply complied. He said; “Although the government has started initiatives in documenting “actual history”, the exercise will only be successful when society takes it up as a mission”.

Modi during his eight year rule has acquired the image of an ironman and a no-nonsense ruler.  But this perception has been shattered. Though his taking back the three agrarian bill did not erode much his image, it is the wide range of protest across the country against Agnipath that has smashed his ironman image prepared with much pain and care.  With the mission to saffronise the military and to ensure to win the 2024 election riding on the back of the youths he had launched the scheme Agnipath.

The PMO said in a tweet; “PM Narendra Modi reviewed the status of Human Resources in all departments and ministries and instructed that recruitment of 10 lakh people be done by the Government in a mission mode in the next 1.5 years”. With the idea of Hindutva losing charm amongst the youth in view of rising unemployment and even during recent Assembly polls, opposition parties pushing the BJP to corner on the issue of unemployment, Modi contemplated to neutralise the criticism by resorting to this scheme. But unfortunately it backfired.

Modi’s plan came as rude shock to the students who were preparing for the military exam for last two years. They were also angry at the government reducing the total job period to 4 years from the traditional 15 years. The movement lasted for two days, but it was enough to shatter the confidence and smash the ironman image of Modi.

Modi must realise that India is not Germany of Hitler. He can pass a resolution in the parliament declaring India as the Hindu Rashtra as he enjoys brute majority. But he ought to remember that India cannot be turned into a majoritarian country. Baring a miniscule per cent of population the majority people of this country would over throw his ideological yoke.

In the early years of his rule, the people and intelligentsia of the country did not open their mouth and protest against his misdemeanour. But after the farmers’ movement they have started raising their voices. As envisaged the farmers’ movement has changed the basic approach of the people towards him and have come to realise that he is not keen to uphold the integrity and prestige of the country. Instead he is trying to implement RSS’s design to turn India into a Hindu Rashtra. Had it not been the case, there was no reason for Modi to maintain a passive attitude towards the protests and encourage persons like Nupur Sharma.

The design of the RSS to smash the democratic and constitutional functioning of the country got exposed in Uttar Pradesh, the Hindutva laboratory. The chief minister Yogi Adityanath might not have dared to flout and trample the rule of law and constitutional provision without getting the consent of the RSS leaders and Modi’s clearance. He has been acting like a super judge of Supreme Court. His order to bulldoze houses of his political rivals, and especially those belonging to Muslim community is a honest example.

He has completely finished the rule of law. The situation has deteriorated to such an extent that some Ex-SC, HC judges, senior lawyers have  to write to CJI N V Ramana to take suo motu action on bulldozing of houses in UP and against recent incidents of violence, repression on innocent civilians and police action on protestors agitating against objectionable remarks made by BJP spokespersons.

Yogi has been acting like a true autocrat. He has directed that the National Security Act, 1980, and the Uttar Pradesh Gangsters and Anti-Social Activities (Prevention) Act, 1986, be invoked against those found guilty of unlawful protests. Yogi is behaving like a judge. There is no provision for appeal and review under his rule. The UP police have arrested more than 300 persons and registered FIRs against protesting citizens.

The Modi regime has criminalised the police and turned it as an appendage of the RSS which is clearly manifest in the action of the police personnel. A couple of years back the UP police at the instruction of Yogi had put posters of some alleged offenders who were basically rights activists. The same design is being resorted to by the SSP of Ranchi. The move came a day after Governor Ramesh Bais had summoned Jharkhand DGP Neeraj Sinha and other senior officials including SSP at Raj Bhavan, and sought to know why posters of those involved in the violence in public places were not put up. This is most deplorable action. Bais was simply trying to act as the super chief minister and govern the police.

Nevertheless Jharkhand government has sought an explanation from Ranchi SSP Surendra Kumar Jha for putting up posters of suspects involved in the violent protest on June 10 demanding the arrest of Nupur Sharma and Naveen Jindal. Principal home secretary Rajiv Arun Ekka, who is also principal secretary of chief minister Hemant Soren, had in a to the SSP said: “This is not lawful and is against the order dated March 9, 2020 passed by Hon’ble High Court, Allahabad.” SSP has been asked to clarify within two days. JMM spokesperson Supriyo Bhattacharya accused Bais of meddling into state executive affairs. (IPA Service)