Ukraine: How Long Can Middle East Nations Do Tightrope Walk 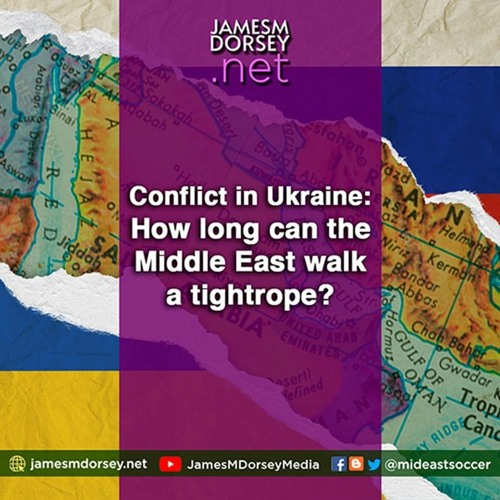 For now, Ukraine is the far from my bed show for most Middle Eastern nations. The question is not if but when Ukraine will arrive on their doorstep.

Two centrifugal forces threaten to push Middle Eastern nations off the tightrope: an increasingly bifurcated world populated by a multitude of civilisationalist leaders in which “you are with us or against us,” and increasingly a need for consistency in the US and Europe’s application of international law and upholding of human and political rights standards.

It wouldn’t take much to throw straddlers off balance.

The Biden administration is considering sending special forces to guard the newly populated US embassy in Kyiv. What happens if Russian forces strike the embassy much like US forces bombed the Chinese mission in Belgrade in 1999?

At the time, China did not respond militarily, but then China was not supporting any party to the wars in former Yugoslavia in ways that the United States and its allies are assisting Ukraine.

Similarly, the risk of escalation exists if the United States, NATO, or individual European countries decide to train Ukrainian forces on Ukrainian soil and are attacked by Russia.

To be sure, Russia, like NATO, does not want the war to expand into direct confrontation, but it would not take much for events to spin out of control.By the same token, Gulf states’ options may narrow if talks in Vienna fail to revive the 2015 agreement that curbed Iran’s nuclear programme.

US President Joe Biden and Iran have both unsuccessfully tried to use the talks to achieve goals beyond the original agreement, from which then-President Donald J. Trump withdrew in 2018.

“We do not have a deal … and prospects for reaching one are, at best, tenuous,” Robert Malley, Biden’s special envoy for Iran, told the Senate Foreign Relations Committee this week. Malley’s statement came as a covert war between Israel and Iran appeared to escalate, and US officials were seeking to repair relations with Saudi Arabia, possibly paving the way for a visit to the Kingdom by Biden.

Israel reportedly advised the Biden administration that it was responsible for the recent killing in Tehran of a colonel in Iran’s Revolutionary Guards Corps (IRGC). No one has officially claimed responsibility for the shooting.

Similarly, a drone strike targeted a highly sensitive military site outside Tehran, where Iran develops missile, nuclear, and drone technology. The drones exploded into a building used by the Iranian defence ministry to research drone development.

At the same time, a Saudi official noted that Saudi Arabia and Iran had not scheduled a sixth round of talks to resolve differences that have helped destabilise the Middle East because the exchanges had made “not enough” progress.

Relations between the United States and Saudi Arabia have been cool since Biden called Saudi Arabia a pariah state during his presidential election campaign. He has since effectively boycotted Bin Salman because of the crown prince’s alleged involvement in the 2018 killing of journalist Jamal Khashoggi in the Saudi consulate in Istanbul.

Bin Salman has denied any involvement but said he accepted responsibility for the killing as Saudi Arabia’s de facto ruler.

As a result of the spat, Bin Salman has rejected US demands that the kingdom increase oil production to lower prices and inflationary pressures and help Europe reduce its dependency on Russian energy.

In doing so, Saudi Arabia is playing with the US the same game that Turkey is engaged in within NATO. Both want to capitalise on US needs for support of Ukraine while not risking US, and in Turkey’s case NATO security guarantees.

Turkey has put conditions on Swedish and Finnish NATO membership but ultimately wants the United States, NATO, and the European Union to develop a Black Sea strategy that would have Turkey at its core. Turkey is effectively left to its own devices in a broader regional approach.

A failure to revive the Iran nuclear agreement would likely drive home that countries like Saudi Arabia and the United Arab Emirates have nowhere but the United States to go when seeking guarantees for their security. China is unwilling and unable to replace the US as a security guarantor, and Russia has taken itself out of the equation.

The US and European window of opportunity to include human and political rights in a meaningful way in its discussions may be while China maintains its current posture.

If this week’s World Economic Forum in Davos was any indication, the United States and Europe are not about to avail themselves of the opportunity. Displaying confidence, Saudi Arabia, bolstered by surging oil prices, grabbed the limelight as the land of economic opportunity in a world battered by inflation, food shortages, and supply change problems. Following missile and drone attacks by Houthi rebels earlier this year, Saudi Arabia and the United Arab Emirates have sought enhanced written bilateral defence agreements with the United States, if not a formal treaty.

Two of Biden’s senior advisers visited Saudi Arabia this week to discuss oil, Iran, and security, including finalising the transfer of two strategic islands — Tiran and Sanafir — in the Red Sea from Egyptian to Saudi sovereignty with Israeli consent.US officials were scheduled in the following days in Washington to brief Israeli National Security Adviser EyalHulata on their discussions.

Intriguingly, Israeli media reported recent secret meetings between Israeli and Saudi officials that focused on security issues, including Iran.Like the Gulf states, Israel has effectively seen its hedging options narrow as a result of the Ukraine crisis but has been less out on the limb.

However, in the final analysis, Middle Eastern states realise that the United States, in the words of former White House director for the Gulf, Kirsten Fontenrose, “can still easily build global coalitions when necessary. While Russia will be radioactive, more a predatory pariah than partner.”

Fontenrose warned that “it would be foolish for nations that previously enjoyed beneficial relations with Russia to invite that radioactivity onto themselves now, in the emerging world order where Russia is not the unipolar power it hoped to become, but instead a failed bet.”

That may be true for Russia and ultimately a no-brainer for Middle Eastern states once they have milked opportunities for what they are worth. (IPA Service)