Ukraine Aftermath To Hit Vulnerable Populations Around The World 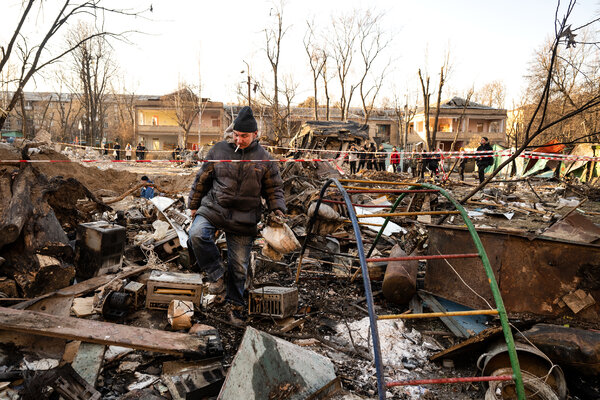 The massive humanitarian crisis caused by Russia’s invasion of Ukraine is engaging the attention of all concerned. The pain and suffering caused by the war to innocent people, manifesting in some three million seeking refuge in Ukraine’s European neighbour states provide unbearable visuals. But away from public gaze, vulnerable sections even far outside the conflict zone are faced with disruption to lives and livelihoods, directly attributable to the Russian action. To make matters even worse, this is happening at a time when the world has barely got out of the Covid pandemic and its aftermath.

Vulnerable populations in poor countries, including India, are most likely to become refugees in their own lands as they will likely find it hardest to bear the rising costs of food and fuel, thanks to the disruption in the economic order brought about by the war and the West’s retaliatory sanctions against Russia.

A McKinsey assessment of the impact of the Ukraine imbroglio outside the conflict zones makes distressing reading. It notes that while there is a lot of uncertainty around how each of the most prominent vectors of disruption will play out, many of them will likely matter a great deal to lives and livelihoods worldwide, albeit to very different extents, depending on geography and sector.

The report highlights how conflicts around the world put livelihoods at risk, not just in places adjacent to and sometimes far from the conflict zone, but the world as a whole. In part, the risk arises because of inadequate attention paid to people whose economic well-being is already precarious, in part because of the inevitable knock-on effects in a highly connected world. It points out. Brent crude oil is consistently trading near $120 per barrel. Further, prices for key agricultural, mineral, and metal commodities rose 10 to 15 percent in the first week of the conflict; nickel prices doubled recently. Ukraine and Russia together produce about 30 percent of global wheat; spot market prices are up about 40 percent.

Beyond the conflict zone, the invasion of Ukraine takes place at a fraught moment for the global economy and livelihoods, particularly the vulnerable. Covid-19 is receding in many parts of the world but is not yet gone, and it is still a crisis in many countries, with some of them struggling with the exit from public-health interventions. Furthermore, the possibility of a new and severe virus variant cannot be discounted. Also, inflation continues to gather steam in most parts of the world. In some, it has reached multi-decade highs and is driving up the costs of living for households.

IMF has also painted a grim picture of how the war is going to be a major blow to the global economy, hurting growth and causing prices to rise. In addition to the suffering and the humanitarian impact, it is going to have a more serious impact for the more vulnerable countries, many of them in the developing world, steeper price increases for food, and fuel is going to hurt these countries badly, IMF said. Clearly, the crisis adds to the already difficult trade-offs in Asia, with rising inflation, limited fiscal space, and the prospect of rising global interest rates amid high public and corporate debt.

There have been conflicting views about the impact of the war and the western sanctions on India, which is not among the frontline trading partners of the country, despite the deeply strategic relations between the two countries. To that extent, the impact is likely believed to be relatively lesser than it is for other countries. Some even view the situation as an opportunity to access cheaper Russian oil using the rupee-rouble window, which is outside the purview of the sanctions.

But IMF position on the issue is very clear. According to the Fund, the negative impact of the war on the US, the EU, and Chinese economies could dampen external demand for India’s exports, while supply chain disruptions could negatively affect India’s import volumes and the prices. There is also the question of tightening financial conditions and heightened uncertainty, which can affect domestic demand and the fiscal position through higher borrowing costs and reduced confidence.

The fund sees a great deal of uncertainty around the outlook for India. The war has heightened the uncertainty and its future course will depend on the magnitude and persistence of the shock, and whether other macro-economic risks materialise, and of course, on the policies of the government in response to the difficult situation. (IPA Service)

South India Needs A Nehru-Gandhi At The Helm Of Congress
Posting....