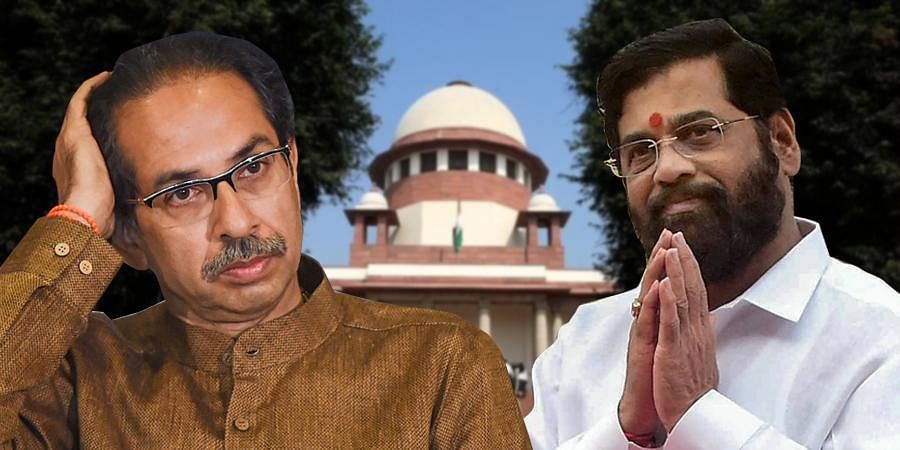 Uddhav Thackeray grew up jostling with a rival for his father Balasaheb Thackeray’s pats and “well-dones”. Cousin Raj Thackeray was finally gone and the years thereafter erased the memory of living with a ‘resentment’. But, irony of all ironies, whoever would have thought that a grown-up Uddhav Thackeray would be challenged by an outsider for his father’s legacy, by far a bigger threat to family-Bal Thackeray than cousin-Thackeray ever was!

Comparisons with Balasaheb Thackeray and Raj Thackeray are a constant for Uddhav Thackeray though the fact that he stood his ground, and is still fighting, says a lot about the resilience and resolve that saw him through “sibling-rivalry” and, now, the machinations of a legacy-usurper who he had rewarded with unconditional trust.

Chief Minister Eknath Shinde’s ugly usurpation of the Thackeray brand is about deception and duplicity. Some would even call it ‘perfidy’. History will match Shinde with Raj Kapoor’s ‘Shree 420’, and for joining the enemy after a bout of backstabbing. But Eknath Shinde is not done with Uddhav Thackeray as he continues to do everything to disassociate Balasaheb Thackeray from his own son Uddhav Thackeray’s slate.

The son’s claim on the father’s legacy, and the “loss of inheritance”, are precursors to finish off the Thackeray brand, politically and permanently, at the behest of the Bharatiya Janata Party, which wants sole proprietorship of “Hindutva”, which, too, is a piece of the legacy Balasaheb Thackeray left behind.

If the betrayal had been attempted when Balasaheb was still alive, there would have been blood in the streets. But the courage to ‘mount a coup’ came only after Balasaheb had left the building! As long as Balasaheb remained on stage, Uddhav Thackeray did not need protection because the likes of Shinde dared not trespass except to bend low when summoned.

In hindsight, it’s clear, Eknath Shinde was biding time, whispering sweet nothings into dozens of ears, plotting not just the takeover of Balasaheb Thackeray’s legacy, but also to grab both power and party. The Shinde takeover of the Shiv Sena is a work in progress, and the “Dussehra rallies” told us who has the upper hand, who is the legitimate claimant, and who the outsider-usurper?

As it is, the Shiv Sena was split wide open when Shinde broke through the defences of dozens of loyal Shiv Sena MLAs, and turned them into traitors. The fight for the Shiv Sena continues in the Supreme Court, and in the Election Commission. That’s because like all those who double-cross, Shinde cannot stop now, not before he has divested Uddhav Thackeray of the last traces of Balasaheb Thackeray’s Shiv Sena.

And whoever gets the Shiv Sena will also get the Shiv Sena election symbol. For Uddhav Thackeray and “his” Shiv Sena, the wait is a constant reminder of the treacherous retainer whose ‘deception’ is hard to digest.

The Dussehra rallies of both men brought out the reality in starker relief. Police estimates of crowd presence at the two rallies give an idea. The Shinde rally was at the BKC-MMRDA grounds. The Thackeray rally was held at Shivaji Park in Dadar. Police said 1 lakh attended the Thackeray rally, while 2 lakh heard Shinde at BKC-MMRDA.

No disputes there because Shivaji Park is smaller than the BKC-MMRDA grounds. Some newspaper reports, however, said that “50% of the BKC crowd” left when Shinde started talking even though Shinde had organized food in substantial quantities for the rally. Thackeray said his rally was attended by 2.5 lakh people, while that of Shinde by 3 lakh. The fact of the matter is, while Shivaji Park can hold 80,000 max, the BKC-MMRDA ’grounds’ has a holding capacity for only 1 lakh.

Who scored more brownie points? Uddhav Thackeray gutted a Ravana-effigy at his Shivaji Park rally, symbolic of the illicit takeover of his government. The Ravana ‘effigy’ was made of “50 khoke (50 cartons)”and was called “Khokasur”. The “50 crore” indicative of how much was allegedly paid to the Shinde MLAs for the treachery.

“Khokasur” burned to loud cries of approval and Uddhav Thackeray, in his speech, called out Shinde for the “Ghadari” while Shinde retaliated with saying “Gadar not Ghadari”, even as Uddhav cursed the “traitors” and said that their treachery will taint their names long after they have departed this life. He called his Shiv Sena the Sena of “loyalists” and a poster at the entrance carried the legend “I won’t let my Shiv Sena become a slave of the BJP.”

The Bharatiya Janata Party, the elephant in the room! Uddhav Thackeray and Eknath Shinde, both claim to be a victim of the calculated deception and double-dealing dishonesty of the other. Uddhav Thackeray, for instance, said this about Eknath Shinde and his MLAs—“Ravana had turned into a monk to abduct Sita, now these traitors are using Balasaheb’s mask to try and take away the Shiv Sena. As time changes, Ravana’s face also changes…”

Digital Credentials Needed For 80 Per Cent Of Jobs In India
Posting....