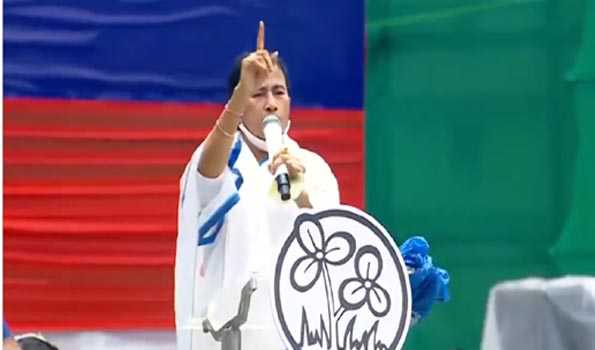 Within the ruling Trinamool Congress(TMC) in Bengal, the decision to strip Industries Minister Partha Chatterjee of his portfolios and party leadership six days after his arrest, is a major setback for Chief Minister Mamata Banerjee’s leadership. She had stood by him firmly from July 22 onwards despite his arrest in connection with massive corruption in the appointment of Government schoolteachers in the state.

TMC insiders had clamoured for immediate action against Mr Chatterjee on account of the magnitude of the allegations against him. As they explained, Ms Banerjee reluctantly submitted to (a) mounting inner party turmoil with leaders publicly calling for Chatterjee’s removal and (b) to the twin, mounting pressures of mass media coverage and negative public reaction. She announced that the Industries and IT portfolios would be in her charge for now.

Later the TMC Secretary Abhishek Banerjee announced that Mr, Chatterjee would be suspended till his name was cleared in the Calcutta high court case. He would no longer be the ‘Secretary General’ of the party– a designation not found in other political parties — nor the head the TMC’s Disciplinary committee.

Some senior TMC leaders were not wholly satisfied with the hesitant manner of Chatterjee’s ‘ditching’. The entire episode of corruption they felt, had badly hurt the TMC’s nationwide political prestige Further it had but effectively projected the state’s image as an utterly lawless poorly governed backwaters!

Initially, Ms Banerjee had declared that she would take action against Chatterjee only after the Calcutta High Court pronounced him guilty. She would not be swayed by media trials or conspiracies, she said. Senior leaders had also publicly maintained this stand.

For the record, what had queered the pitch for Chatterjee was the shocking cash recovery of Rs 22 crore, kilos of gold ornaments and jewellery, deeds of multiple landed properties purchased all over West Bengal, by Enforcement Directorate(ED) personnel. They began by raiding Chatterjee’s residence on July 22.Their raids have since continued in searches conducted in12 other locations. The cash and other valuables were mostly seized from two flats owned by of one Arpita Mukherjee, reportedly a close friend of Mr. Chatterjee.

What drove the final nail in Chatterjee’s coffin was the discovery of a further Rs 28 crore in cash, plus six kilos of gold jewellery and ornaments, along with title deeds of scores of landed property/assets, during a search on July 28.

Most of the assets had been acquired in her name, but major chunks of prime plots/land in rural areas, measuring up to 10 bighas in villages and scores of flats in major towns in the state, had been found. Properties had also been purchased in the name of Chatterjee’s son-in-law, his security guards, his personal assistant, their relatives and neighbours. Apparently fictitious ‘shell’ companies had been set up with dummy or non-existent directors in several areas.

The saturation electronic 24 hour media coverage focusing repeatedly on heaps of currency notes and expensive jewellery seized by ED operatives, and the removal of the seized items by medium sized trucks, naturally became the talk of the town. Opposition leaders lost no time in announcing the recovery of Rs 50 crore from two locations, involving a former education Minister and his shady cohorts, of whom a fair number were women, as the nadir in Bengal politics since 1947.

Ms Mukherjee and most of the other women so far referred to be ED officials are, for the record, small time actors/ models who occasionally worked in Bengali and Odiya films. Yet there were allegations that these women had directly interfered in the recruitment of school and college teachers, and were involved in accepting illegal bribes, approved and overseen by Chatterjee.

As more and more sordid details about the scam spilled out, even the predominantly pro-TMC media in Bengal changed its tune and fell in line with enraged public opinion ‘Ultimately it was this aspect of public anger that forced the CM to change her stand and jettison Chatterjee,’ admitted a senior TMC leader.

He also conceded that not many people were convinced by the CM’s claim that she knew nothing about the scam which had continued since 2012! ‘She had claimed similar ignorance as the Sarada chit fund scam was reported,’ said a youth leader. ‘Few had believed her then.’

After her arrest, Ms Mukherjee’s behaviour was par for the course. She told ED investigators that the large sums of money all belonged to Mr, Chatterjee. The flats were in her name, but she was not allowed entry into all of them. Some flats were used by Chatterjee as his personal banks. Unknown people often visited some of these flats and houses, but they had Chatterjee’s approval. Chatterjee himself visited these flats from time to time and was clearly in charge of everything.

Most neighbours whether in Tollygunge or Belgharia, where Ms Mukherjee’s two flats are located denied knowledge about the goings-on there. They did see occasional VIPs like a South Kolkata MP or state officials visiting the South Kolkata housing scheme but they were not interested in mixing with locals.

The relentless coverage in the Bengal mass electronic media of the seizures, highlighting the massive heaps of brand new currency notes and their removal in trucks by officials, was nothing short of a real life fairy tale for the mostly cash-strapped people of a relatively backward state Most viewers did not conceal their disgust and anger, regardless of desperate TMC leaders from the Chief Minister downwards trying to defend the state Government!

However, the ruling party eventually gave up its faltering defence against the rejuvenated, angry opposition put up by CPI(M), BJP and Congress activists, on July 22. Both the CPIM) and the BJP organised protests and rallies denouncing the TMC Government and called for the immediate resignation/sacking of the Chief Minister herself. As the supreme leader of the ruling TMC, Ms Banerjee simply could not escape her responsibilities as a ruler, they stressed.

Besides, as state Ministers Firhad Hakim and others had claimed, the responsibility for whatever had happened, could not be attributed to Mr Chatterjee alone. Many decisions in the Education department too had been taken only after prolonged discussion and debate within the cabinet. Therefore, the cabinet and other Ministers also should be held accountable.

TMC insiders said that before Mr Abhishek Banerjee announced the dismissal of Mr Chatterjee from the Ministry at least two senior leaders attending the party meet, strongly pleaded on Chatterjee’s behalf. They recalled his many contributions for the growth and development of the TMC over the years during its hard times spent in the opposition. He deserved more sympathy and support, in their view.

However, the majority within the TMC leadership was not in favour of the party’s continued support of Chatterjee, in view of the magnitude of the crimes alleged against him. Further indulgence showed to the former Minister would tantamount to a blatant support of corruption, which the opposition parties were already capitalizing on.

The entire developments relating to Chatterjee have come as a big jolt to Trinamool Congress which has been feeling comfortable after its latest sweeping victory in by elections and the local polls in North Bengal. Earlier also after the Sharada and Narad scams came out in public, there were big furore but the opposition could not capitalize that in next elections. This time, the impact of Partha’s corruption is widespread as it affects the lower middle class and middle class families of Bengal, whose young members are desperately looking for jobs in state government bodies, especially in schools where the salaries are now quite high. A dharna by the candidates who did not get jobs in latest SSC recruitment is continuing.  And it has just crossed 500 days.

That way, for the Bengal CM Mamata Banerjee, one of the toughest challenge of her tenure as CM is facing her. She has to prove that she personally is not involved in any way in this huge racket. The ED which acts at the whims of the BJP government, will certainly try to implicate the CM and the state government in this whole affair. How Mamata comes out unscathed personally from this Partha corruption case will have impact on the politics of Bengal for some time. (IPA Service)