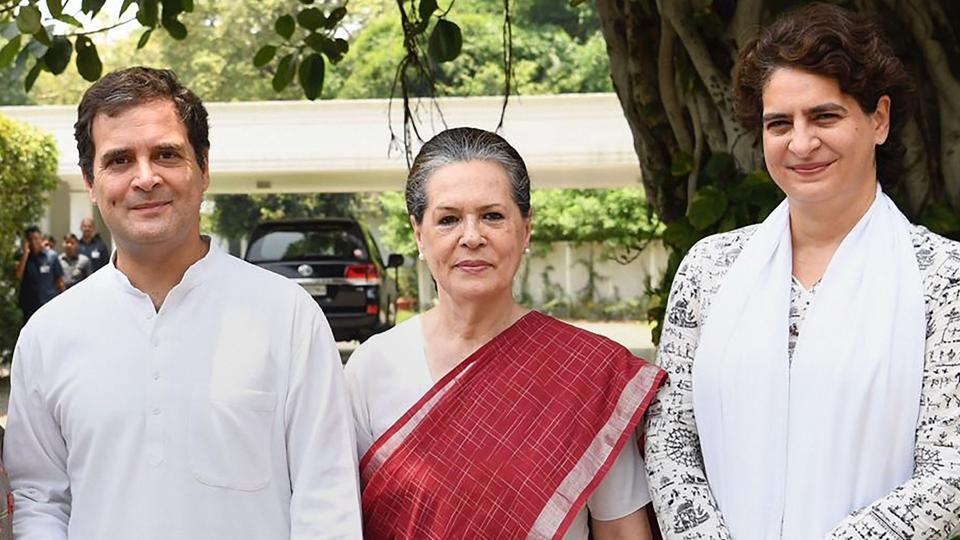 Massive protests are being held by senior Congress leaders and workers, including Rahul Gandhi, against the Narendra Modi government, raising current issues like inflation and mass unemployment. However, the real cause behind the ongoing protest is the strong opposition to the Enforcement Directorate’s continued questioning of the party president Sonia Gandhi. A comparative image has been shared from the official Twitter handle of the Indian National Congress, showing former Prime Minister, the late Indira Gandhi sitting on a dharna, on one side and with the picture of her grandson Rahul Gandhi on the other. Indira’s photo is from 1977 while Rahul’s is dated July 26, 2022. Congress has captioned the picture: ‘History is repeating…’ Along with this, a part of Ramdhari Singh ‘Dinkar’ poem “Krishna’s warning” too has been posted. The two lines that have been written are as follows: “Extend the chain to me/ Yes, yes Duryodhana! Bind me/I have come to tie/ What has the chain brought up?”

ED’s interrogation of Sonia Gandhi has even melted rebel Congress leaders like Ghulam Nabi Azad and Anand Sharma, who joined the press conference at the AICC headquarter to register their ire against the harassment of the 75-yeard-old ailing veteran. While the two prominent members of the G23 have been critical of the leadership’s style of functioning, nevertheless they were united with the rest of the Congress party workers in demanding an end to the questioning. Azad made an emotional pitch saying she is being unnecessarily harassed, she’s not keeping well and argued political opponents should not be treated as foes. Another G-23 leader Manish Tewari too was seen at the protest site, along with other party leaders and supporters. He was briefly detained on July 27 while trying to march towards the Rashtrapati Bhavan.

Eyeing the upcoming Gujarat assembly elections, Delhi Chief Minister Arvind Kejriwal has promised that his party would provide free electricity up to 300 units per month if voted to power in Gujarat. While presenting the Delhi model, free power has become a key election issue in Gujarat. During recent campaign rallies in Gujarat, Kejriwal targeted the Congress by asking the voters not to waste their votes on the opposition party, claiming it cannot defeat the BJP. The AAP is aiming to cut into the Congress’s vote share to challenge the BJP, as it had done in Delhi. The Bharatiya Tribal Party (BTP) of Chotu Vasava has also announced an alliance with the AAP to give a fight to the Congress for tribal votes. On the other hand, Congress is facing the dual challenge of defeating the ruling BJP and protecting its base from parties like the AAP and AIMIM, which are also trying to make inroads into the state.

Suheldev Bharatiya Samaj Party (SBSP) president Omprakash Rajbhar was once keen for an alliance with the Bahujan Samaj Party (BSP) leader Mayawati for the next Lok Sabha polls. However, as per sources, Mayawati does not want to join hands with SBSP because she does not count on his reliability. With no other option left, Rajbhar now wants to join hands with BJP. While SBSP has six MLAs, only three of them are ready to join the BJP. The rest three MLAs want to join Samajwadi Party instead. Now, Rajbhar is faced with a big dilemma and is unable to decide.SP is likely to join hands with Mahan Dal again and talks are on for an alliance in UP.

With less than a year’s time for the Karnataka assembly elections, some BJP leaders have planned to project party strongman B S Yediyurappa’s son B Y Vijayendra as the future Chief Minister. While former CM BS Yediyurappa may not be in the scene in terms of power in Karnataka, but that did not refrain him from announcing that his son, Karnataka BJP Vice President BY Vijayendra, would contest from Shikaripura, a seat Yediyurappa has already represented eight times since 1983. But the final decision is to be taken by the party high command, said Yediyurappa. He also announced retirement from electoral politics. Meanwhile, Karnataka CM Basavaraj Bommai said that the BJP would contest the upcoming assembly polls under the guidance of the senior leader BS Yediyurappa. In May this year, Vijayendra was denied the MLC election ticket even after a recommendation by the state BJP’s core committee. It is no longer confidential that Yediyurappa wants to secure a better future for Vijayendra.

GADKARI SAYS POLITICS NOW IS ONLY ABOUT POWER

Union Minister Nitin Gadkari has shared that he sometimes thinks of quitting politics since it has now become more about power than about social or developmental change. “A lot of times I wonder whether I should give up politics. There is more to life than politics,” Gadkari said during an event organised to honour social worker Girish Gandhi in Nagpur. When questioned if politics was about the welfare of the country and society, or if it was about being in government, Gadkari said it was now only about acquiring and staying on in power. Meanwhile, Congress communications chief Jairam Ramesh chose to extract political meaning from his remarks, tweeting: “First Rajnath Singh and now Nitin Gadkari has said his Mann Ki Baat. Is this sign of climate change?” (IPA Service)