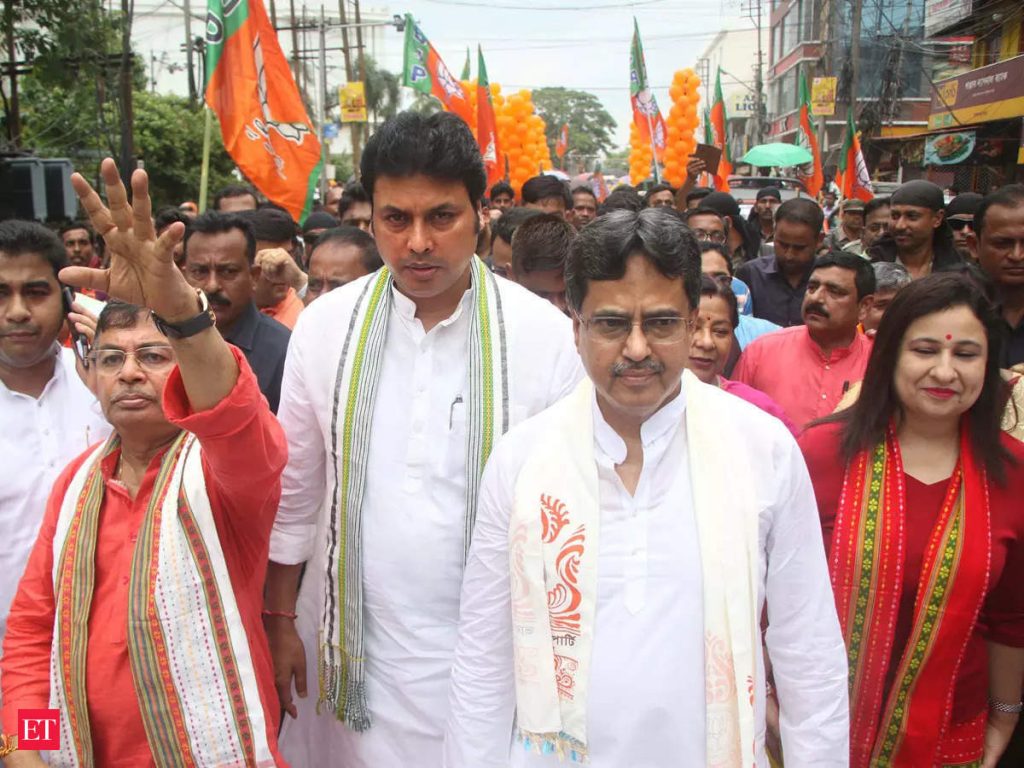 With only two days left for the by-elections for four Tripura assembly seats on June 23, the war of words between the ruling Bharatiya Janata Party (BJP) and its main challenger Trinamool Congress (TMC) reached a climax of sorts this week.

While TMC’s top leader Mamata Banerjee has not visited Tripura, other senior party leaders including the All India Secretary of the TMC, MP Abhishek Banerjee has spearheaded a spirited campaign. Other leaders including Dr Manas Bhuyanand state party president Subol Bhoumik also held a series of public meetings and participated in road shows.

Given the acrimony between the two parties, the TMC’s complaint against the ruling BJP of using terror tactics against its supporters and misusing the police to disrupt its programmes has occasioned no surprise. Mr Banerjee has claimed that such tactics only expose the BJP’s fear of the TMC as a party and its fundamental inability to organise minimally fair elections. The reason: the BJP’s own poor record of misgovernance, corruption, lawlessness and lack of development in the state.

In view of the present decline of the CPI(M) and Congress in Tripura, both of which had ruled in the state for long periods earlier, it was now left to the TMC to counter the might of the ruling BJP, he said. Regarding the accusation of the BJP misusing its power against the TMC, there were mixed reactions from local CPI(M) and Congress leaders.

While both parties upheld the charge for lawlessness and terrorism encouraged by the BJP against its political opponents, their spokesmen held the TMC equally accountable: they made repeated references to the almost similar tactics adopted by the TMC against the CPI(M), Congress and the BJP in West Bengal!

Such bitter exchanges left little doubt among observers that while each party had its established pockets of support, the opposition votes would certainly be split, which should logically favour the prospects of the ruling party, the BJP. However, Mr. Banerjee referred to such speculation in his speeches at public meetings, but he gave it an entirely different twist.

Treating the BJP more as an opposition party, he claimed that the anticipated vote split among contending parties would help reduce the BJP’s votes, in view of the strong anti incumbency factor working at present. A sure sign that the BJP was feeling jittery was its decision to replace former Chief Minister Biplab Deb by Mr Manik Saha only months before the polls scheduled in 2023.It was common knowledge he said that in Tripura the BJP was riddled with severe internal dissidence.

There is no question, however, that the TMC has managed to emerge as the main opposition challenger to the BJP in terms of the sustained media coverage its leaders have received in both the local and the outstation press. As with the municipal polls held a few months ago, where the TMC emerged as the third party behind the BJP and the CPI(M) in terms of vote shares won, an elaborate and expensive pre-poll campaign had been carried out, much of it planned from its Kolkata headquarters.

However, not everything has gone in the TMC’s favour. In a reversal of what usually happens in West Bengal, where group defections from the BJP to the TMC are common, Tripura too has seen a similar changing of sides, even before by-elections. Over 60 TMC supporters/activists switched their loyalties to join the ruling party only 24 hours ago, at one centre. More people were expected to cross over from the TMC, said BJP leaders.

The four seats where the by-polls are being held are, Agartala, Surma, Jubarajpu and Bordowali. At Agartala and Bordowali seats, vacancies occurred as former Congress leader Sudip Roy Burman who had joined the BJP, joined the TMC. His colleague Ashis Saha did the same. However, Saha lost his membership shortly afterwards owing to non fulfilment of certain technicalities. Elections became due at Jubarajnagar as the veteran CPI(M) leader Ramendra Debnath died.

Both Congress and the CPI(M) have also gone all out in their make or break fight against the BJP. A major disadvantage for the Congress has been the general perception that it is not doing well either at the state or at the central level. Despite its recent brainstorming session at Udaipur, there has been little perceptible improvement at the party’s functioning at the state level. In particular its lack of appeal among youth and new voters, remains a major concern.

The CPI(M)’s position is a little better, not least because of more local activism, and closer coordination between its Tripura unit and bigger bases in Kerala, West Bengal etc, in comparison with the Congress. Over the years again, despite facing charges of blatant partisanship, lack of development and declining law and order situation, the Left has never really faced a charge of rampant corruption, which continues to plague both the BJP and the Congress.

Over the years again, the Left front’s efforts to help the poor people economically with special attention to the rural and tribal areas, have helped create a considerable support base for the CPI(M) which the ruling BJP cannot ignore.

While the TMC has thrown in star campaigner Shatrughan Sinha to lead the TMC’s roadshows, drawing large crowds, the BJP used its regional heavyweight leader, Assam Chief Minister Himanta Biswa Sarma to bolster its Tripura campaign. This , said observers, was mainly because all contending parties were treating these by-polls as a dress rehearsal before the 2023 Assembly elections .

While the monsoon rains did disrupt pre poll programmes of the TMC and the BJP, Mr Sarma attacked opposition parties in scathing terms. These parties he said were about as politically irrelevant as the old currency notes after the ‘notebandi exercise ‘carried out by the centre! He referred to the special attention to Tripura and the NE region as a whole by the BJP from the highest level in his speeches. The state BJP is being helped b the central leadership and huge expenses are being incurred by the party in the campaigns. The CPI(M) is also making last ditch efforts for a turnaround but the response from youth and women is still weak. Results to be declared on June 26 will have its impact on the mood of the contending political parties for the state assembly elections in 2023. (IPA Service)

Presidential Elections In Last Seven Decades Have Been Eventful