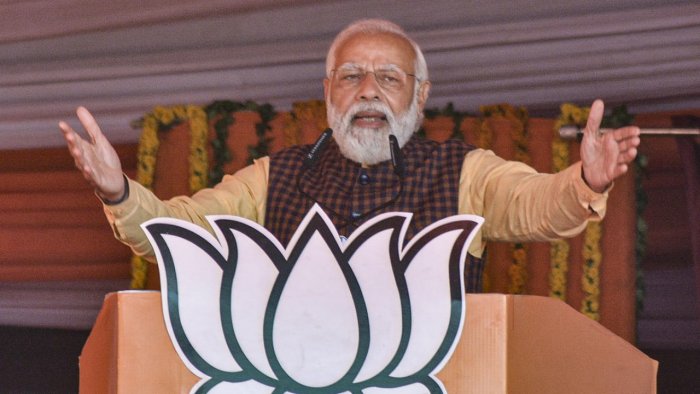 To the tribal, add the jat. To Droupadi Murmu, Jagdeep Dhankar. Prime Minister Narendra Modi and the BJP are building a new coalition of votebanks to win 2024Lok Sabha polls. Don’t forget Modi is also assiduously wooing the Pashminda Muslim, who is apparently cut-off from the Ashrafi Muslims, the upper crust among Muslims with a superiority complex reserved for the Brahmin in the ‘Hindu fold’. The Pashminda aren’t coy about admitting that they are descendants of Hindu converts to Islam, culturally -rooted in the Indian ethos as opposed to the Arabic.

Modi, for all purposes, has had enough of being a narrow-minded  “Hindu bigot”. Gujarat 2002 is a distant memory, and Chief Minister Narendra Modi sitting next to Prime Minister Atal Behari Vajpayee, being instructed on “Raj Dharma” must be disgusting watching. One prime minister to a future prime minister, a statesman and a street-politician.

Topic for a psychoanalyst? Nobody likes being persona non-grata anywhere. Imagine what must have gone through in the head before and after becoming Prime Minister, from being unaccepted to being accepted? Deep down there must be satisfaction that the countries which had refused visa had jumped to welcome him with open arms.

The last eight years have made him a global leader. And there’s no two ways he values his global standing. This man has used human beings like no other human being has. He does not want to remain a Hindu icon alone. In his head, after Droupadi Murmu, he is also tribal talisman. And with ‘Vice President’ Jagdeep Dhankar, the hope must be that the farmers who were antagonized will find their way back home.

Like demonetization, the three farm bills were also products of a fertile brain. Now, it is time to make amends. The winning streak cannot be left to chance. Third-time ‘lucky’ is not a proven fact. The core votebank of the Hindu is getting impatient and the ‘vishwaguru’ of ‘sabka saath, sabka vikas’ fame cannot go back to playing narrow despot. The man wants a rainbow coalition.

And, he has the treasury, the taxpayers’ loot, in his pocket, to run the ‘laabarthi’ scheme like was done in the Uttar Pradesh assembly elections. Of course, others have caught on, and it will be a battle of lollipops in Gujarat. It is at such times that central agencies assume more importance. So, choosing Dhankar after Murmu fits the pattern.

That being said, maybe, just maybe, things may not pan out as accepted, because the core votebank of Hindus has been hit by a severe case of erosion. Thanks to ‘sar-tan-se-juda’ and the BJP governments’ complete and total impotency to protect the lives of Hindus in BJP-ruled states, cracks have developed in the BJP’s Hindutva votebank, which will widen, and their effects felt in the Gujarat and Karnataka assembly elections.

With every Hindu hacked to death, the BJP’s electoral prospects dies a little. And there are enough Hindu heads and Muslim sar-tan-se-juda specialists to keep it going till as long as it is required. Political parties, mainly and generally, have been seen to guard their core votebanks. Notice how the Congress has stuck to its core Muslim votebank through thick and thin. This, even when Muslims in several states found other “rehnumas”, and refused to vote Congress!

The BJP, however, believes, nay is confident, that its Hindutva votebank will not ditch it, no matter how high the toll of the Hindu-hacked, especially when there’s always Modi to fall back on. Prime Minister Narendra Modi appears to be supremely confident that even the rising death-count of the “cowardly Hindus” will not alienate BJP’s Hindutva electorate from voting Modi to keep him in 7, Lok Kalyan Marg for a third straight term.

Narendra Modi and the BJP have less than two years to build a coalition of votebanks to beat the Opposition’s 2024 challenge. And though the Opposition looks scattered and moving against each other, with the enforcement directorate adding to the utter chaos, it also looks like the Modi-Shah juggernaut can stall to a halt because the Hindu-Muslim polarization that the BJP fed is showing distinct signs of biting it in the rear! (IPA Service)

Contradictory Trends In Supreme Court Orders Give Cause For Concern
Posting....