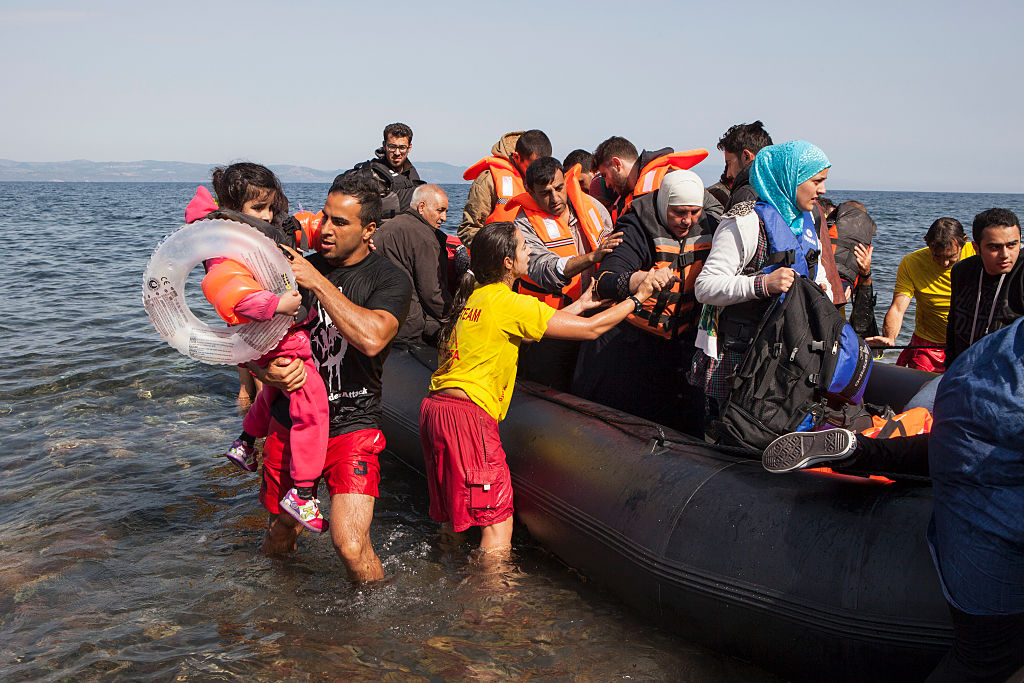 One Saturday morning in November 2020, Dimitris Choulis, a human rights lawyer native to the Greek island of Samos, woke to a message informing him that twenty-four asylum seekers had landed on the beach.

Worried they would be forced back to Turkey by the Greek authorities, Dimitris rushed to the mountains overlooking the shore. There were no asylum seekers — most likely, they had immediately left the area for fear of arrest. Meanwhile, the Greek authorities had appeared, and so Dimitris ran to the port, thinking the new arrivals might be sent back across the Aegean to Turkey.

Eventually, the asylum seekers turned up, and Dimitris began to reconstruct the events: their boat had reached Samos at midnight, at which point one of the passengers, a six-year-old Afghan boy, had gone missing at sea. At roughly 1:30 AM, a search and rescue team arrived — and left immediately without conducting a rescue mission.

That same day, the boy was found. The cause of death wasn’t drowning: he had been wearing a life vest from his neck to his waist. Rather, the child had died as the waves thrashed his small body against the rocky shore for nine hours. Had the search and rescue team conducted a mission, the child would have been saved.

When they were alerted that the child had died, the Greek authorities stopped patrolling.

The authorities approached the child’s father, and accompanied the news that his son had died with the charge that he would be prosecuted for his son’s death, on the basis that he had exposed his son to risk by seeking refuge. Hassan, another passenger on the boat, was charged with smuggling.

Dimitris took on the case, and in May 2022, almost three years after that fateful night upon the shores of Samos, Hassan was sentenced to one and a half years on probation, and the child’s father was acquitted. “It was a very stupid case,” Dimitris told me. “There was no proof, no nothing.”

Acquittals are, however, the exception. Smugglers never board a vessel and so the authorities consistently arrest the asylum seekers steering the boat in their place, resulting in many successful convictions.

Dimitris has taken on numerous appeals for asylum seekers who, unlike the Samos2, were not acquitted. In May 2022, the Paros3, three Syrian asylum seekers and the only survivors of shipwreck, received a life sentence for each of their fellow eighteen passengers who died at sea, resulting in a collective sentence of 439 years.

This is the outcome of increasingly punitive laws that criminalize asylum seekers. The 2014 Greek Law 4251 lays the foundation for these cases; Article 29 punishes “facilitation of entry from Greek territory of a third country citizen” with up to ten years of prison, whilst Article 30 criminalizes “captains or masters of a ship” with at least ten years. As a result, Dimitris points out that the outcome of the Paros3 case was legally sound, though horrifically unjust.

Greek Law 4251 is grounded in the 2002 EU Facilitation Directive, which requires no material gain for an act to be defined as smuggling. This means that anyone who helps refugees during their journey can be prosecuted under charges of smuggling. Today, just four EU countries comply with the UN definition of smuggling that requires financial interest for a charge to be brought.

This is hard to understand, given there is such a deluge of cases: Amir and Razuli, both Afghans in their twenties, were sentenced to fifty years in prison after a pushback where their rubber dinghy was sunk by the Greek coast guard. Their appeal was scheduled for March 2022, postponed to the next month when a government witness did not turn up, and finally to December of this year to evade public scrutiny, Julia Winkler from borderline-europe told me.

The scale of this is unknown: Julia estimates that hundreds of asylum seekers are taken straight from the shore to prison. Statistics imply the same: 63 percent of the Greek prison population are foreigners.

Recent years have seen pushbacks become systematic, authorities-led, and increasingly violent. Just last month, 105 people were beaten and loaded onto a Greek navy vessel in a coordinated pushback to Turkey. Bulgarian border guards have used police dogs for pushbacks to Turkey, French police have sent asylum seekers back to Italy in subzero temperatures, and Spanish soldiers have beaten thousands of people to return them to Morocco.

Meanwhile, in Poland, reports have emerged of territorial defense forces abusing and harassing humanitarians, and even destroying ambulances providing medical assistance to refugees, as Grupa Granica, a Polish human rights monitor, told me.

This is not to mention the deaths arising from EU-funded pushbacks. The Libyan coast guard, funded by the EU since 2016 to stop refugees from reaching Europe, has been caught shooting at refugees in the Mediterranean.

Pushbacks are incompatible with international law, but arguing that migration is a crime (hence the term “illegal migrant”), allows pushbacks to be seen as a form of law enforcement.

Legalizing human rights violations inevitably paves the way for the violation itself. In anticipation of the Nationality and Borders Bill that criminalizes undocumented entry to the UK, border forces were caught carrying out “pushback drills” in the English channel.

Europe, crippled by its own xenophobia, has provided Turkey and Belarus with an opportunity to test out the instability of the European project.

I spoke to Natalie Gruber, cofounder of the NGO Josoor, about the standoff on the Turkish-Greek border. The NGO’s work documenting pushbacks began shortly after February 2020, when the Turkish authorities started directing refugees to the Greece-Turkey land border.

“The authorities bussed people from pre-deportation camps around the country to the border, distributed fence-cutting tools, and made refugees storm the fence,” Natalie told me. Josoor’s volunteers were told to stop distributing tents, since only makeshift tents made from tarpaulin and sticks were permitted. “The authorities were trying to make things as uncomfortable as possible to make refugees cross the border.”

Greece, supported by the EU, began violent pushbacks. Two people were killed by rubber bullets, but Natalie estimates that the real number is more like six to seven.

And so, the EU has come undone by its own xenophobia, making clear it prefers a diplomatic standoff to accepting a few thousand refugees into an area of 447 million. Seeing how easily Turkey destabilized the EU, Belarus adopted the same tactic, and from July 2021 began to direct asylum seekers to the EU’s external border in the Polish forest.

In the aftermath of modern-day Europe’s first refugee crisis following World War II, state leaders enshrined human dignity into international law. Our current trajectory betrays this commitment, and yet the discourse on immigration of late has been so steeped in misinformation and disinformation that we find ourselves discussing the criminality of migration instead of the criminality of our migration policy.

Refugee law recognizes that asylum seekers can cross a border without documentation to lodge an asylum claim. While criminal law is designed to punish individuals who pose a threat to others or society at large, crossing a border or staying in a country irregularly is not a crime against persons.

Conflating migration law and criminal law is a dangerous misnomer — and repealing the laws that conflate the two must be central to any progressive migration reform. (IPA Service)