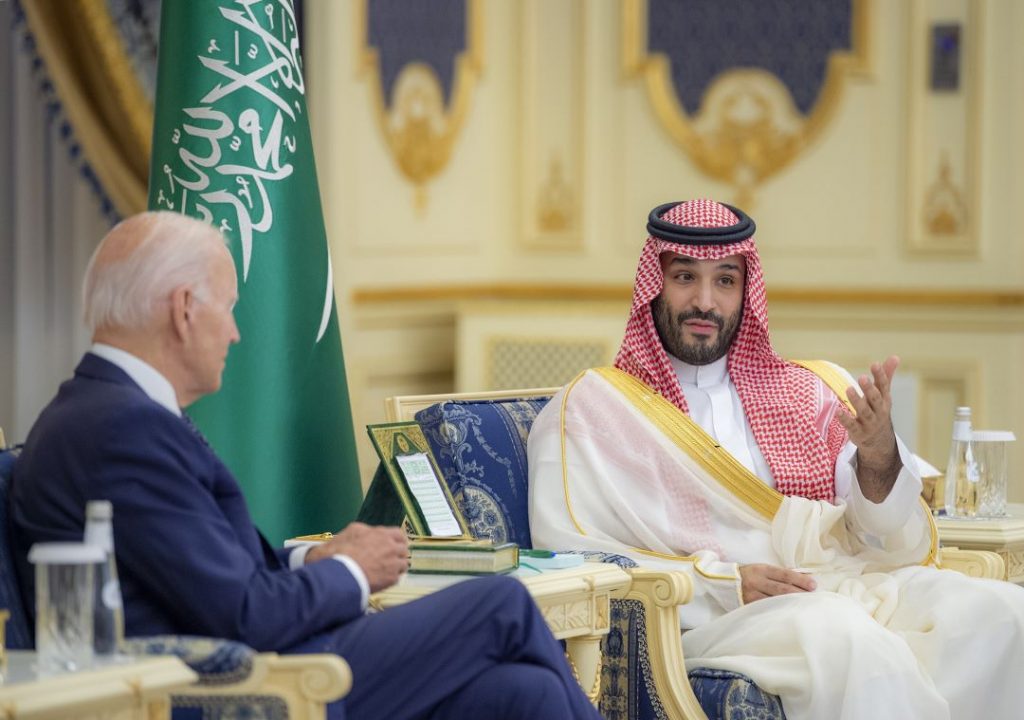 If you’re going to undermine your own public rhetoric and supposed values by cozying up to a brutal autocrat, you might as well get something out of it. While maybe an obvious point to the rest of us, it’s apparently something US officials are just now belatedly realizing about the US-Saudi relationship.

That “unbreakable” relationship is now suffering maybe the severest strain yet, with the two longtime allies all but at each other’s throats. In a grim but fitting detail for the current political landscape, what finally triggered this wasn’t the ever-growing list of grisly Saudi crimes and abuses — a rap sheet that includes its spy agency’s documented complicity in the September 11 attack that killed thousands of American civilians — but the House of Saud’s seeming to side with Russia over its ally Washington on the steadily escalating war in Ukraine.

Last week, the OPEC (Organization of the Petroleum Exporting Countries)+ cartel that exercises a quasi-monopoly on world oil agreed, at Saudi urging, to a major production cut of two million barrels per day, which has already sent US gas prices climbing after months of easing. Washington, which objected strenuously to the move to no avail, is already viewing the move as a “hostile act” by the crown prince Mohammed Bin Salman, with many observers reading the cut as the Saudi leader’s attempt to create an “October surprise” for the Biden administration, pushing up inflation just in time for next month’s midterm elections. Joe Biden is now talking about “reevaluating” the United States’ relationship with the brutal autocracy in turn.

This US unhappiness goes well beyond the White House though. Senator Bob Menendez (D-NJ), the top-ranking Democrat on the Senate Foreign Relations Committee, is calling for an immediate “freeze on all aspects of our cooperation with Saudi Arabia,” including arms sales and security assistance “beyond what is absolutely necessary to defend US personnel and interests.”

Some Democrats in the House have introduced a bill to pull troops and weapons systems out of Saudi Arabia and the United Arab Emirates (UAE), a position supported by lawmakers including Representative Ro Khanna (D-CA) and Senator Chris Murphy (D-CT), all of whom framed the move as an appropriate punishment for the Saudi leadership, in their eyes, picking Russia over the West in the ongoing war.

Senator Bernie Sanders (I-VT) began beating the drum on this as early as last Wednesday, while Senator Dick Durbin (D-IL), the second-highest-ranking Senate Democrat, fumed that “the Saudi royal family has never been a trustworthy ally of our nation” and that US foreign policy needed to be reimagined “without this alliance with these royal backstabbers,” pointing, among other things, to “unanswered questions about 9/11.” Durbin is backing legislation to let Washington sue OPEC over price-fixing, which is right now being backed by both a Republican colleague and Senate majority leader Chuck Schumer.

It may seem somewhat absurd for this — the tacit Saudi support for a country waging an illegal war of aggression on a smaller neighbour — to be the final straw for US officials, given the much longer and even more brutal war that Saudi Arabia itself has waged against Yemen with US support and given the apparent Saudi role in an attack on American soil. But this isn’t really about Russia and its war on Ukraine.

The reality is US-Saudi relations have been going badly for some time, the downward slide picking up speed with the election of Joe Biden, who had vowed on the campaign trail to turn the country into a “pariah” over its 2018 assassination of journalist Jamal Khashoggi and, to a lesser extent, the barbarity of its treatment of Yemen. In practice, Biden continued to treat the regime with kid gloves, signing a carefully phrased executive order that allowed him to keep fueling the Saudi war effort and declining to sanction the crown prince when his own intelligence agencies fingered him in Khashoggi’s killing.

Since then, Biden’s attempt to thread this needle has apparently not satisfied the erratic and violent crown prince, who seems to have relished the opportunity to thumb his nose at the president, particularly as the White House has tried to rally the world against Russia’s invasion (and domestic uproar over high prices). Saudi Arabia and the UAE both undermined Washington’s attempts to diplomatically isolate Russia, continued to reject US cries to alleviate war-induced inflation by cranking up oil production, and Bin Salman wouldn’t even take Biden’s phone calls to discuss the matter, even as he spoke with Russian president Vladimir Putin.

But maybe the biggest slight came in July, when Biden, desperate for a boost to oil production to shore up his flagging presidency, earned condemnation across the board for reversing himself and taking an official trip to Riyadh. Publicly weighing the sweetener of restarting “offensive” weapons sales before the trip, Biden was photographed giving the Saudi despot a widely derided fist bump before meeting with him privately, where he supposedly challenged him on the Khashoggi murder, all before restarting the flow of supposedly “defensive” weaponry to its warmaking coalition.

It was all for naught: the crown prince snubbed Biden by having a regional governor meet him at the airport, Saudi sources embarrassed Biden by denying his description of what took place at their meeting, and Bin Salman ultimately rebuffed the president’s pleas to boost oil production. And now he’s going even further, doing the exact opposite of what Biden requested, and less than a month out from a make-or-break election for his party.

It’s a risky but not totally irrational gamble for Bin Salman: boost Saudi revenue in the short-term while weakening the US president who opposed you, then wait the next two years out until the Saudi-friendly Donald Trump could be back in the president’s chair. In the meantime, you’ve given every future US leader a high-profile lesson in why never to challenge Saudi Arabia.

Whether it pans out as he hopes remains to be seen. But in the meantime, provided that Democrats’ rage over this latest snub endures and they follow through on threats to withhold US aid, this spat could prove the key to finally ending the frustratingly resilient US support for the Saudi war against Yemen, where a ceasefire just expired.

According to the United Nations, approximately 377,000 people were killed in the eight-year conflict by the end of 2021, 70 percent of them children under five, with millions facing critical levels of malnutrition. The majority of deaths have been the result of indirect, noncombat effects of the war, namely hunger and disease, though these effects are also being directly caused by Saudi actions, namely its blockade of the country and its indiscriminate, even deliberate, destruction of infrastructure like hospitals, food supplies, and water and sanitation systems. Ending the pivotal US support for the war would be major step toward ending this carnage, which survived earlier thanks to Trump’s vetoes.

The latest news is that Khanna and Senator Richard Blumenthal (D-CT) have introduced legislation in both chambers of Congress to immediately end weapons transfers to the country, and they claim it’s “already garnering bipartisan support in both chambers” over Bin Salman’s latest slight. Let’s hope it passes. The Russian invasion has sparked much moral outrage in the United States, but little self-reflection on, or attempts to actually change, US policy that supports a variety of identical crimes. Maybe that’s about to change. (IPA Service)