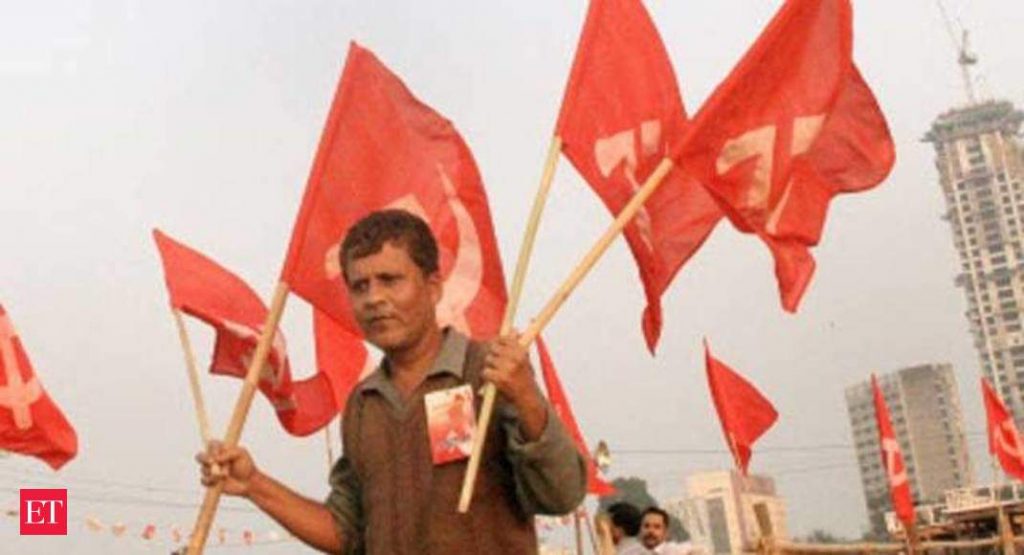 THIRUVANANTHAPURAM: All eyes are riveted on Kannur in Kerala, where the 23rd Party Congress of the Communist Party of India (Marxist) is set to begin on April 6.

Strengthening the party at the national level to make it politically more relevant. That will be accorded top priority at the Congress. For that to happen, the party must regain the mass base and lost space in national political landscape. And all energies will be bent to attaining that prime goal. The Congress will discuss and debate the strategy to be adopted to see that the marginalization of the Left becomes a thing of the past.  For realization of that goal, the CPI(M) must  rebuild the party in West Bengal and Tripura, which were its strongholds in the past.  Without regaining its past glory in the two states, the CPI(M) cannot hope to play the key role it played in the Left-United Progressive Alliance (UPA). All Party Congresses have tried to expand the party’s base into the Hindi heartland.  But for some success in Maharashtra, Rajasthan and parts of Himachal Pradesh, that task has remained unachieved.

The only exception is Kerala, where the party created history by winning two successive terms in office – the product of political pragmatism. The party has to build on the gains made in Kerala. And the Party Congress will work out long-term strategies to realize that goal.

Another issue which is bound to be in focus is the electoral understanding with the Congress. But, unlike in the last Party Congress, where the major point of discussion was ties with the Congress, this time around, the issue has not caused any major division within the party. True, the CPI(M) has identified the BJP as the main enemy to be defeated, But there is still lack of clarity on the issue.

There are two streams of thought on the matter. A section led by CPI(M) general secretary Sitaram Yechury favours a broad alliance of secular, democratic forces, including the Congress. But the Kerala unit is in no mood to toe that line. The Kerala CPI(M) is of the  view that the Congress cannot lead an alternative to the BJP as the party is soft on communalism. The state CPI(M) firmly believes that an alternative sans the Congress is possible, and the left parties must focus attention on formulating the same. And since Kerala is the only State where the CPI(M) is in power, the state party will have a decisive say in finalizing the party’s political line. Although the party is happy with its performance in Kerala, it is a matter of concern that the CPI(M) has not been able to  secure the vote percentage it polled in the 2006 Assembly elections. This erosion in mass base, despite the continuity in governance needs to be addressed urgently, the party feels.

In this connection, considerable significance is attached to the line enunciated by veteran CPI(M) leader S Ramachandran Pillai on the eve of the Party Congress. Talking to a prominent Malayalam TV channel, SRP, who is set to retire from the Politburo, said cooperation and understanding with the Congress is possible provided that party gives up its neoliberal economic policy and rejects communalism. If the Congress does that, there can be no problem in having an understanding with the Congress, SRP said. SRP also laid accent on the need to effect generational shift with the inclusion of more youth in positions of power and responsibility in the party.  Significantly, SRP’s line is at odds with the stand taken by CPI(M) state secretary Kodiyeri Balakrishnan that a tie-up with the Congress is not possible.

The CPI(M) also faces daunting organizational challenges as it goes about the task of strengthening the party. It may be mentioned that the 2015 Kolkatta Plenum had decided to enhance the quality of party membership. But that task has remained unimplemented given the pressures the party faces at the national level. The Plenum had emphasized the need for attracting the best elements of the working class and the socially oppressed sections to the party fold. Unfortunately, it has not happened except in states like Maharashtra and Rajasthan.

Another notable feature of the Congress will be the absence of veteran comrade V S Achuthanandan. 98-year-old VS has not missed a Party Congress since the party’s inception.  Achuthanandan will miss the Kannur Congress because of poor health.  Incidentally, the 22nd Party Congress held in Hyderabad in 2018, had honoured VS, the only founder member of the party alive. VS was inducted into the Party Politburo at the 12nd Party Congress held in Kolkatta in 1985. He remained a part of the PB for 24 years. He was removed from the PB in June 2009 and has not made it back since then.

The 23rd Party Congress will also see the exit of S Ramachandran Pillai, who has been part of the PB for 30 years.  SRP became a PB member in 1992 along with Sitaram Yechury and Prakash Karat.  Though he will be out of the PB, most probably, SRP would be made a permanent invitee to the Central Committee.  In an interaction with a news channel, SRP said he will be active in other areas.  SRP said he would be concentrating hereafter on creating awareness among the people on party ideology and strengthening party education.

The Party Congress is also set to witness major structural changes besides a generational shift in the party leadership.  Consequently, induction of new blood has been given high priority. A few veterans like S Ramachandran Pillai will step down from the PB. The only exception will be 76-year-old Kerala Chief Minister Pinarayi Vijayan.  Reports have it that an understanding has been reached on giving Yechury a third term at the helm.  The party may revive the Central Secretariat to help the PB. The Kerala CPI(M) will have greater say in the selection of new faces. State secretariat members and ministers K N Balagopal and P Rajeev are likely to be inducted into the CC.  A few veterans like Biman Bose and Hannan Mollah may also step down.  Brinda Karat, 75, could, however, be given an exception. (IPA Service)