Imran Khan Has Pushed Pakistan Into A Major Constitutional Crisis 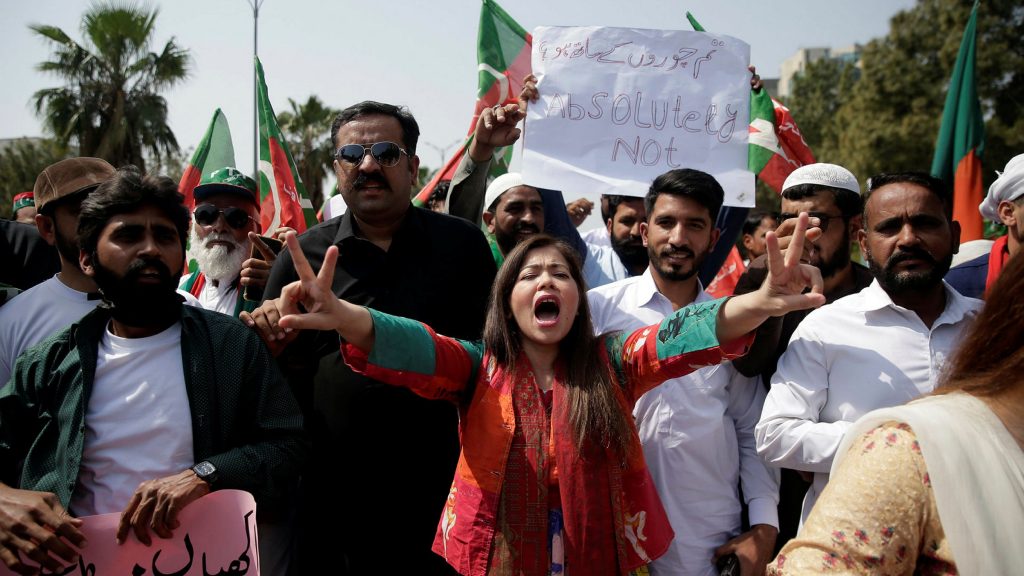 Pakistan’s Prime Minister Kaptaan Imran Khan is in an existential crisis that pushed him personally into a political quagmire. His stature worsened further following the crucial observation by the Chief Justice of Pakistan Umar Ata Bandial during the hearing of a suo moto matter following the dismissal of National Assembly of Pakistan on Sunday by the President Arif Alvi on the prime minister’s advice that the NA Speaker erred in rejecting the no-confidence motion. The meaning is clear that reference to Article 5 of the Constitution of Islamic Republic of Pakistan is incongruent.

The CJP’s remarks was in the midst of hearing of the suo moto case related to the constitutional lemma following the ruling by the NA deputy speaker Qasim Suri and the subsequent dissolution of the lower house on the advice of the PM Imran Khan. Incidentally, NA Speaker Asad Qaiser was reportedly unwilling to a ruling as per Article 5. Earlier, Attorney General Khalid Javed had too told TV anchor Humid Mir in Geo News programmed Capital Talk that voting was a must on the no-confidence resolution against the PM Imran Khan on 3 April 3 under the Constitution. The deputy speaker Qasim Suri, a member of ruling PTI, chaired the session and promulgated dissolution of NA. He blocked the confidence motion that Khan had widely been expected to lose. Hence the ruling assuming that a foreign conspiracy was behind the no-trust motion ,was considered unconstitutional by many.

Heading five-member larger bench that included Justice Ijazul Ahsan, Justice Mohammad Ali Mazhar, Justice Munib Akhtar and Justice Jamal Khan Mandokhail are also part of the larger bench , the SCP is looking into the matter in terms Article 63(A) of the Constitution that suggests disqualification on grounds of defection for not obeying the parliamentary party directions in the election of the prime minister, chief minister or vote of confidence or no confidence or money bill etc

Former PM Nawaz Sharif said on Sunday that Prime Minister Imran Khan and all characters involved in the “conspiracy” against the nation are guilty of high treason and should be tried under Article 6 of the Constitution. He tweeted in chaste Urdu, which, translated freely, read :”Today, a man obsessed with power trampled on the Constitution. Imran Khan, who puts his ego before the country and the nation, and all the conspiratorial characters involved in this conspiracy are guilty of serious treason to which Article 6 applies. Abuse of Pakistan and desecration of the Constitution will be taken into account”.

Pakistan People’s Party chairman Bilawal Bhutto Zardari ridiculed Imran Khan saying that instead of ‘playing till the last ball had run away with the wickets. He said that the president, prime minister, NA speaker, deputy speaker and anybody involved in this act on Sunday had committed high treason.’

Pakistan’s internationally well-known TV personality Amir Liaquat Hossain and a member of PTI snapped fingers at King Khan, “”I would like to say that what the Prime Minister has proved that the opposition was doing right, I am announcing to leave the PTI, who has deviated from the constitution and who is deviating? The decision will be made by the court but unfortunately this game was played to remove General Qamar Bajwa”

A leading English daily made a blistering attack on the premier, With the parliamentary process pulverised on the orders of a leader who continues to hold it in deep contempt, Pakistan has been thrown into the dark abyss of a constitutional crisis. It seems, in retrospect, that the captain had planned to play this dastardly card all along. It came as a rude shock: it takes quite the fall for a self-proclaimed ‘fighter’ to display such unsportsmanlike behaviour. By tearing up the rules of the game instead of ‘playing till the last ball’

Whether the NA session is to be reconvened to pave the way for no trust motion is to be awaited. The defeat of ruling PTI-led government is certain as support from 172 NA members in favour of the government is almost impossible while more than 190 members are likely to vote for the motion. .

Kaptaan Imran Khan’s grip on power has been steadily weakened over the past two weeks. His rhetoric on the alleged role of foreign powers in Pakistan’s domestic affairs has proved vacuous. Even many in his party Pakistan Tehreek-i- Insaaf are not convinced that the USA backs the no-confidence motion, hatching a grand conspiracy to remove him. The premier stated, ‘they are against me because I am against corruption’ to ‘I am being removed because I am standing against the West, particularly America, for pursuing an independent foreign policy’.

The high-powered National Security Council headed by PM sat to discuss the so-called diplomatic cable which, the PTI government claimed, had evidence of the US plot seeking a regime change in Pakistan. The NSC decided to issue a demarche to the USA But the Pakistan’s military top brass pooh-poohed the allegation. The isolation of Kaptaan is more than evident. (IPA Service)

Centre Has To Extend All Possible Assistance To Beleaguered Sri Lanka
Posting....