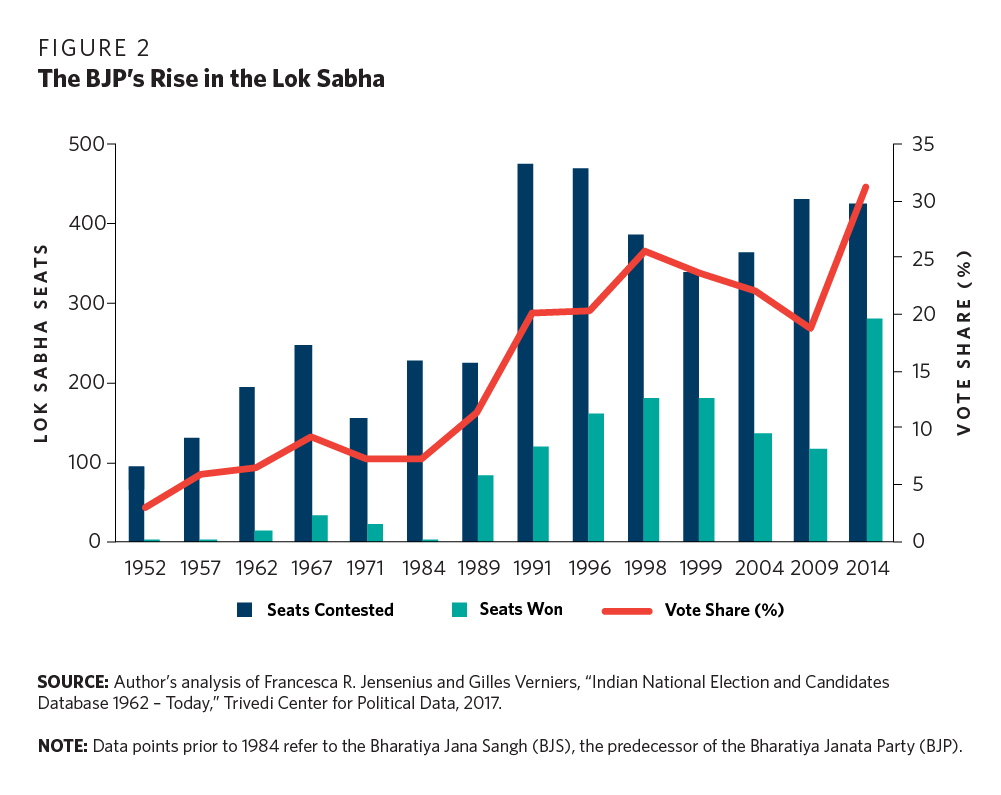 Prime Minister Narendra Modi waxed eloquent on April 6, the 42nd foundation day of the Bharatiya Janata Party, dwelling deep into ‘parivaarvad’ and ‘rashtravaad’, besides pointing out that the rise and rise of the BJP is also centred round India’s growing global clout. Who he was giving a pat on the back with that reference was not hard to guess. Also if anybody missed party co-founder Lal Krishna Advani, it wouldn’t have surprised many.

Fact is, if Atal Behari Vajpayee and LK Advani saw the beginning of the “rise and rise of the BJP”, the usurpation of the party mantle by Modi is now complete. Flushed with funds, the Bharatiya Janata Party boasts of being the world’s largest political entity. The saffron “Hindu-nationalist party” has more membership than the red Chinese Communist Party.

So much so, it can be said without cringing, that the “rise and rise of the BJP” is a cliché for all things “rise and rise.” The party has risen from two MPs in 1984 to 301 today. Then, when it was ‘2’, it was lampooned and ridiculed. Today, nearly 38 years on, the party can rightly brag that its singular focus on winning elections had much to do with its phenomenal growth.

And not even Modi can deny Vajpayee and Advani the credit for the rise of the BJP, before Modi para-dropped himself onto the national stage. Of course, elections cannot be won without issues to engage the electorate with. There is no doubt that the BJP has been tampering with the Hindu mind with Hindutva. Majoritarian politics is the BJP’s mainstay. The party will no doubt govern and grow till as long as the Hindu rightwing doesn’t see enough of its specific goals achieved.

The BJP’s persistent rise to superstardom in the eyes of the Hindutva can be traced to Advani’s rath yatra and the demolition of the Babri masjid. The slogan ‘Jai Shri Ram’ has played a stellar role. The more secular parties like the Congress waver between ‘Jai Shri Ram’ and ‘Allahu Akbar’, the more will the BJP find new recruits from among the Hindus.

Of late, this process has quickened, especially after the bungled attempt to divide ‘Hindu’ with ‘Hindutva’. Politicians like Rahul Gandhi, egged on by the definitions given to Hinduism by the likes of Salman Khurshid and Shashi Tharoor, have contributed their mite to building up the BJP as the “saviour of Hinduism”.

The Hindu-Hindutva divisive debate couldn’t have come at a more opportune time for the BJP than just before the recent 5-state elections. Besides, poll-promises like 40 percent reservation in party tickets for women stood no chance before the 35 kg free rice scheme. Modi, for all the Hindutva strain in him, has worked out a food-grains formula to ensure the continued rise and rise of the BJP.

Ask the so-called intellectual about the growth of the BJP and he will wander into ideological valleys and meander into alleys and box-canyons in them. He will talk of “ideological policy preferences” when in reality, apart from whatever remains of the communist strongholds, the majority of Hindus have no hard and fast ideological preferences.

The Bharatiya Janata Party has been able to tap into this vast reservoir of Hindu flotsam and build them into a solid vote-bank, which is constantly increasing in bulk and spread, kept alive and kicking with all-weather poll planks that are far from secular.

‘Hindu nationalism’ for example can only grow and grow, spread and spread. And with the use of it, the BJP will only rise and rise. Add to ‘rashtravaad’, “36,000 mandirs”, allegedly demolished and built upon, and the BJP will not run out of masjids to be brought down for a long time to come. The Bharatiya Janata Party’s journey from rubble to rise and rise is based as much on its army of disciplined cadres as it is on the remains of history.

The Modi Government has cleverly intervened to rework societal norms (triple-talaq) or economic issues of households (LPG, housing, direct to bank transfers) to grow out of its preconceived niche in the minds of the minorities, and the marginal communities. Simultaneously, it has been doing all it can to address “historical wrongs” even if at the risk of being labelled “Hindutva majoritarian.”

Compared to the Congress party’s 137 years, the BJP at 42 is but a toddler. But it is not a babe in the woods. Even the procrastinators among political pundits will admit the BJP looks unassailable. Opposition parties arrayed against the world’s largest political party are running out of time as the BJP digs deeper into the Hindutva trench to fight from, and entrench itself in. Prime Minister Narendra Modi has opened a new era for BJP by applying his formula of Hindutva-Big Business among 140 crore Indian population. As of now, the anti-Modi parties lack any effective weapon to challenge this Modi juggernaut. (IPA Service)