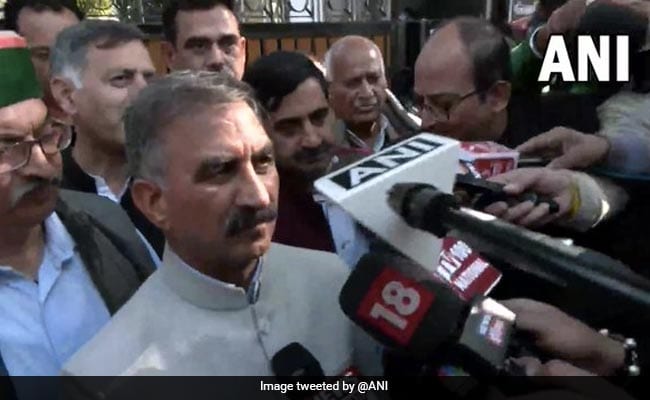 Himachal Pradesh Chief Minister Sukhvinder Singh Sukhu said today that he would form his cabinet after the assembly session, amid reports of intense lobbying for ministries among Congress factions delaying the process.

Sukhu denied any pressure or challenge in naming ministers.

“There is no pressure, I am very relaxed…always relaxed,” the Chief Minister told NDTV in Delhi, where he and other Himachal Pradesh MLAs met with senior Congress leaders.

Pratibha Singh’s son Vikramaditya Singh, an MLA, was widely tipped to be Deputy Chief Minister, but that did not happen.

Speaking to NDTV, Sukhu said he was keen on honouring Virbhardra Singh’s legacy and would consider his son for his cabinet.

“He’s a young man. Definitely we will think about it, but after the session,” said the Chief Minister.

He also denied any fissures after the victory of the faction-ridden Congress in Himachal. The Congress won the Himachal election last week by scooping up 40 of the state’s 68 seats. The BJP won 25.

The internal rivalry fueled speculation that the BJP, which lost power, would attempt an “Operation Lotus” – the code for MLAs switching loyalties to the BJP to topple opposition governments.

“There is no fear of Operation Lotus. It’s a media creation. We are united. We will take all MLAs along in Himachal. The Congress will complete five years in power. Don’t worry,” Sukhu said.