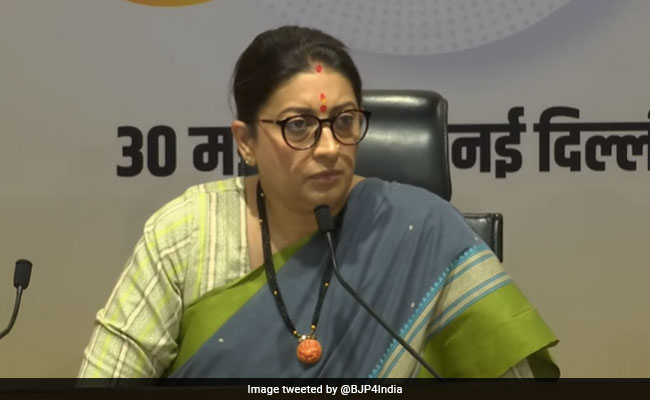 Union minister Smriti Irani hit back against a Congress leader’s shocking “latkas” and “jhatkas” comment with a sharp takedown of the party and Rahul Gandhi, the prospects of whose contesting from Amethi had led to the controversy.

Tagging Rahul Gandhi, Irani responded on Twitter. “Heard one of your provincial leaders have announced in an indecent manner that you would contest from Amethi in 2024. So is it definite that you will contest from Amethi? You won’t run off to another seat? You won’t be afraid??? PS: You & Mummy ji need to get your mysoginistic goons a new speechwriter,” read a rough translation of her Hindi tweet.

PS: You & Mummy ji need to get your mysoginistic goons a new speechwriter.

The leader she referred to was UP Congress leader Ajai Rai. Irani, who currently represents Amethi in Lok Sabha, comes to the constituency only to show “latkas” and “jhatkas”, Ajai Rai had said in a pejorative reference to dance moves.

Asked whether Rahul Gandhi will make a bid to win back Amethi, he had initially answered in the affirmative.

“It (Amethi) has been the seat of the Gandhi family. Rahul jee has been the Lok Sabha MP from there, so has been Rajiv (Gandhi) jee and Sanjay (Gandhi) jee, and they have served it,” Ajai Rai had said.

The BJP had reacted sharply, saying such a comment was “shameful” for a party that gave the country its first woman Prime Minister and was headed for a long time by a woman.

“The language used by the Congress has always been anti-women. It shows the culture and mindset of the Congress. And a party, which has given a woman prime minister to the nation, and which was headed by a woman president for a long time, such statements from its leader, is definitely shameful,” said UP BJP spokesperson Anand Dubey.

The Congress has not reacted to Rai’s remark or responded to the BJP attacks. Rahul Gandhi is currently in Rajasthan, leading his Bharat Jodo Yatra.

Gehlot orders cooking gas at Rs 500 ahead of poll