Simultaneous Elections Will Be Two Steps Back For Democracy In India 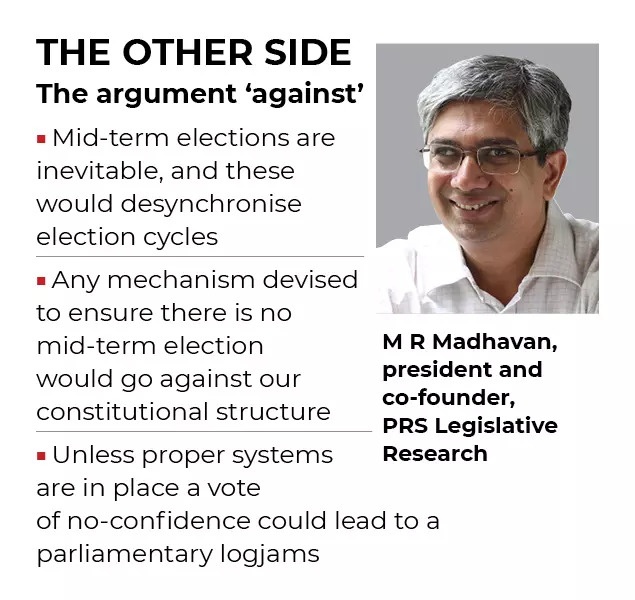 The frequency of elections has lately gained centre stage, with voices rising against the prevailing practice of holding continuous elections in one or other part of the country. In that context, the idea of simultaneous elections — holding elections for all three tiers of government together ­— is being pushed as a comparatively efficient practice.

Its advocates flag the adverse impacts of continuous elections on developmental schemes and policies, the prolonged engagement of armed forces, the massive expenditure in holding continuous elections, and the historical prevalence of simultaneous election (from 1951-52 to 1967) to justify and strengthen their stand. In contrast, detractors invoke the constitutional and practical concerns that would follow from its implementation. For instance, can the terms of the Parliament and state legislative assemblies be synchronized? If yes, would that be constitutionally permissible?

Calls for the re-introduction of simultaneous elections started gaining traction towards the early 1990s, with the Bharatiya Janata Party [BJP]’s rising electoral gains. However, they have resurfaced with unparalleled vigour since 2014 alongside Prime Minister Narendra Modi’s mounting stature in the national political arena.

That synchronicity is neither accidental nor surprising. Evidence from other countries, particularly the U.S.A., suggests that simultaneous elections­ may result in a ‘coattail effect’: the ability of a strong and popular candidate to attract votes for other candidates of the same party in an election. Considering that Modi has been the star campaigner spearheading BJP’s electoral victories since 2014, calls for ‘One Nation, One Election’ are unsurprising. This is affirmed by a 2019 study by Professor Sanjay Kumar of the Centre for the Study of Developing Societies, New Delhi which indicated that 32 per cent of BJP voters chose to vote for the party only because of Modi.

From the perspective of other national political parties, such a scenario would spell doom as their leadership cannot match Modi’s charismatic influence on voters across India. Their leadership has largely failed to translate their influence into electoral support for their respective parties, particularly in Lok Sabha elections. Thus, they prefer continuous rather than simultaneous elections.

On the face of it, the proposal for simultaneous elections appears attractive. Nonetheless, it would be naïve to back it without weighing in the opportunity cost. Beyond the constitutional and practical anxieties, there are several democratic concerns that deserve attention.

First, given the ‘coattail effect’, the ruling political party particularly, and national political parties generally, have an edge over their competitors in simultaneous elections. That itself runs counter to the democratic ethos by denying a level-playing field to all. But the gravity of the threat increases at the regional level, where it may have far-reaching consequences for democracy.

Considering that national political parties will be in a dominating position in case of simultaneous elections, the regional parties will either be less successful or will be compelled to join hands with their national counterparts. Whatever be the case, it would have a negative impact on regional aspirations and demands as it is the regional political parties that primarily raise them at different democratic forums.

Furthermore, as the ‘coattail effect’ gives an upper hand to the ruling party/coalition, there is always a risk that they will be incentivized to hold on to political power, irrespective of the costs. This will be fatal for democracy, as Indian as well as world history is replete with examples, such as Hugo Chávez’s Fifth Republic Movement in Venezuela and Viktor Orbán’s Fidesz in Hungary, where single party dominance has culminated in converting a democratic setup into a dictatorial one.

Second, one of the basic tenets of parliamentary democracy is that a government which enjoys popular support has the right to govern unless it chooses to dissolve itself or loses popular support. The idea of simultaneous elections does not necessarily adhere to this tenet. There will be cases where governments elected through simultaneous elections might either lose popular support or are dissolved mid-term. If a state government loses majority mid-term, then the Governor, acting on behalf of the President of India, will be compelled to ask other parties/coalitions to form a government as the option of re-election is unavailable. If the attempt to form a government fails, then the state will have to be governed via President’s rule under Article 356 of the Indian Constitution, until the next elections. That is, on the face of it, anti-democratic.

This scenario would apply at the Union level too. If a union government loses its majority mid-term, the only available course of action would be the President inviting other parties/coalition to form government. If that fails, the country will have to be governed by President’s rule with the aid and advice of a Council of Ministers, who would be part of a defunct Lok Sabha and a functional Rajya Sabha, until the next elections. Such a government would be far from being democratic, and closer to a constitutional oligarchy.

No wonder, then, that even the draft report of the Law Commission of India on Simultaneous Election from 2018 notes that the existing framework of the Constitution does not permit simultaneous elections, and stated that conducting elections in such a manner would require substantial amendments to the Constitution, the Representation of the People Act, and the Rules of Procedure of Lok Sabha and state legislature.

Finally, elections are an important tool of ensuring democratic accountability. Continuous elections help keep the elected representatives and governments on their toes for they are required to go amongst the public frequently. This puts them under continued scrutiny to deliver upon their promises. With simultaneous elections, that accountability would be diluted as elected representatives will no longer be accountable through mid-term elections.

A step forward towards the re-implementation of the practice of simultaneous elections would effectively be two steps back for democracy in India. (IPA Service)