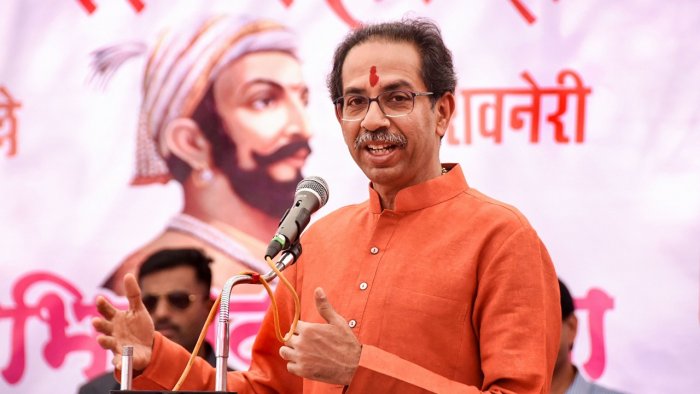 ‘Unreachable’ is what mobile phones communicate when the tower can’t connect. But when a bunch of Shiv Sena MLAs went “incommunicado” midnight on Monday, the future looked grim for Maharashtra Chief Minister Uddhav Thackeray, who couldn’t get through to Eknath Shinde, a key Sena MLA and a strongman of no mean clout within the Shiv Sena. By then, it was no longer news that a bunch of Sena legislators had cross-voted to give arch rival Devendra Fadnavis and the BJP, victory in the Maharashtra MLC elections.

Tuesday morning, news trickled in that Shinde along with 22 (later upgraded to 26, then to 31) Sena MLAs were in Surat, cocooned in a “security wrap” of a 5-Star facility in the “BJP state.” This, after the BJP outfoxed the Maha Vikas Aghadi in the MLC elections after its Rajya Sabha triumph, and the midnight mourning was followed by the morning malcontent.

Rebel Sena leader Eknath Shinde, a power centre by himself and second only to Balasaheb Thackeray when the Hindu-Hriday Samrat was alive, apparently couldn’t stomach Aditya Thackeray’s airs anymore. Also, he had wanted to become Chief Minister! Now, it is a “now or never” for Eknath Shinde, and the BJP is believed to be the “suthradhar” though it is unlikely Shinde will be considered over Fadnavis in case of an alliance.

By 10 am, Tuesday (June 21) things had gone awry for the MVA government, putting into question its survival. And Chief Minister Uddhav Thackeray was at sea without NCP strongman Sharad Pawar by his side. Pawar was chairing a meeting in Delhi to decide on an Opposition candidate for the President’s post. Around 2 pm, Pawar told the media in Delhi “nothing would happen to the MVA Government”.

Tuesday morning Bhai Jagtap declared he would be flying to Delhi to “complain” to Sonia Gandhi. Then, news came that the cross-voting was part of a larger conspiracy with Uddhav Thackeray and his MVA government in the crosshairs. This took everybody by surprise including Bhai Jagtap, who is president of the Mumbai Pradesh Congress president.

Shinde and his flock were cloistered in a five-star facility in Surat from midnight Monday. Sanjay Raut, Shiv Sena Rajya Sabha MP and virtual mouthpiece of the Sena, appeared chastened, but confident that the MVA would ride out the trouble. Raut said the hardboiled “Shiv Sainik” that Eknath Shinde is, would be back in the Shiv Sena.

By Tuesday afternoon, the BJP was openly talking of a Fadnavis-led BJP government in alliance with the breakaway Shiv Sena MLAs, which was later changed to “resignations of the Shiv Sena MLAs”, followed by President’s rule because Eknath Shinde cannot form a separate group with only 26/31 MLAs. His group doesn’t have the numbers to beat anti-defection.

A great deal has been left to Sharad Pawar, whose attention was divided between “President” and the developing MVA crisis. Pawar wanted to be in Mumbai but not before he had put his stamp of approval on the combined Opposition’s presidential candidate. Gopalkrishna Gandhi’s rejection and Eknath Shinde’s rebellion were dictating Pawar’s itinerary.

The summary at 11.30 pm: There was churn in the MVA. Eknath Shinde’s rebellion was a loss of face for Uddhav Thackeray. Shiv Sena’s Rajya Sabha MP Sanjay Raut, in his usual bombastic self, claimed things would be sorted out, and Raut was banking on Sharad Pawar to lure Shinde back to the mother-ship.

True to character, Raut wouldn’t admit that the big challenge for Uddhav and Pawar was “how to bring them back”. Raut kept saying that ‘ghar wapasi’ of Shinde was a certainty. But Eknath Shinde is a bigger leader than Uddhav Thackeray. And he has the money and the muscle, too.

Shinde is a mass leader and it was Shinde who made it possible for ‘UT’ to become CM. What led him to go incommunicado was not known, but he was scheduled to address a presser at 2.30 pm. What he says will decide the MVA’ fate.

The way things stood, the BJP had received 133 votes in the MLC elections while it had only 106 MLAs. The Shiv Sena has 55 MLAs, but it received only 52 votes. The NCP has 53 MLAs but received 57 votes. The Congress has 44 MLA, but received only 41 votes. With the 26 (likely to go up to 31) Shinde MLAs, the BJP will still not be able to scrounge up the 145 required for majority in the Maharashtra assembly.

The last time Devendra Fadnavis tried forming a government, Sharad Pawar pulled the rug from under his feet. This time, there’s the MVA Government and it will require a miracle and Sharad Pawar to compel Eknath Shinde to stop playing the lone wolf and return to his lair. Matoshree has never been in so much trouble, ever, not even when Navneet Rana threatened with the Hanuman Chalisa. (IPA Service)

Rewriting History Is The Brain Child Of RSS To Refurbish Its Image
Posting....