‘She Said’ Film Is A Powerful #MeToo Testimonies Elevating The Drama 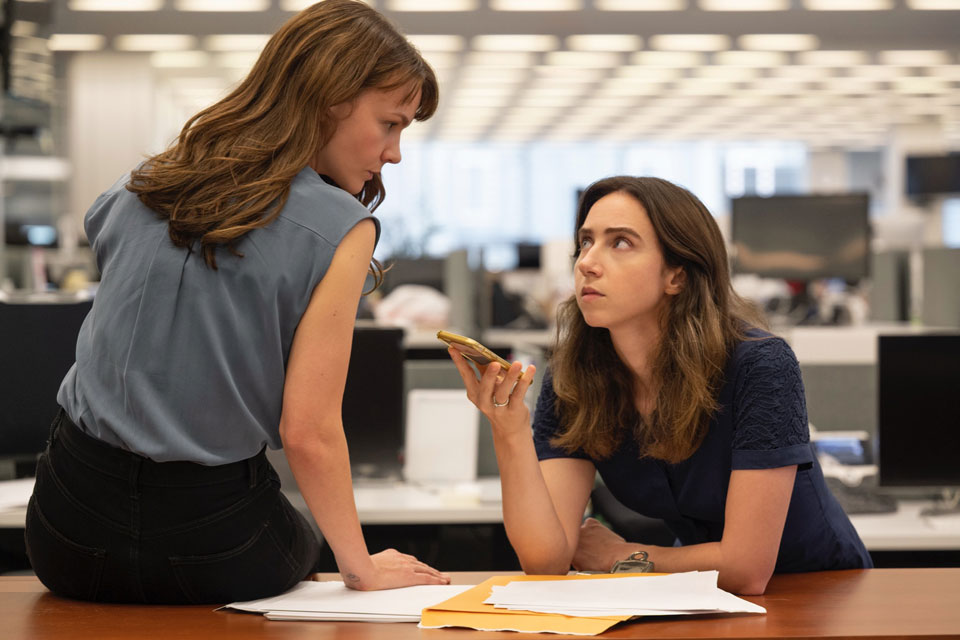 The phrase “Me Too” was originally coined in 2006 by Black sexual assault survivor and activist Tarana Burke. It was used as a way to empower victims of sexual assault to not live in the shadows in shame or fear. Yet, it wasn’t until 2017 that the internet hashtag #MeToo really gained traction in the mainstream in connection to revelations about sexual abuse by big-time Hollywood producer Harvey Weinstein. The film She Said tells the tale of how one of the news stories that exposed Weinstein’s transgressions came to be, and what the journalists involved went through to get the story that would help spark the viral movement.

The biographical drama lacks flare or innovative choices in how it presents its story, but the real-life testimonies of the victims of Weinstein are the saving grace in elevating the film. She Said does a fine job in showcasing the exhaustive work journalists have to go through when investigating a story, and how important freedom of the press is when holding those in power accountable.

Directed by Maria Schrader from a screenplay by Rebecca Lenkiewicz, She Said is based on the book by the same name written by the two journalists who cracked the story. Jodi Kantor and Megan Twohey are reporters at The New York Times who worked together investigating Miramax and Weinstein Company co-founder Harvey Weinstein and allegations against him of sexual misconduct on the job. The film gives viewers a behind-the-scenes dramatization of how Kantor and Twohey went about interviewing the victims of Weinstein’s abuse, and their hopes of getting some of the women to go on the record in order to turn the allegations into more than just hearsay. She Said also paints the picture of how Weinstein was enabled by a system that protects powerful and wealthy men to the detriment of their victims.

The testimonies of the victims are what gives this film the heart and spark it needs. There are numerous powerful scenes devoted to the reporters listening to these accounts. Director Schrader wisely chooses not to put too many bells and whistles on these scenes, instead opting to simply make the audience listen and feel the words. This choice has an important secondary meaning. Many of these women had to live with their secrets for years—some a decade or more—and they are finally being heard. The movie gives these statements the spotlight they deserve.

Jennifer Ehle gives a heartbreaking performance as Laura Madden. Madden was one of the first women to go on the record when it came to her abuse at the hands of Weinstein. Ehle beautifully displays Madden’s internal struggle to come forth in the midst of a health crisis. Samantha Morton as Zelda Perkins (an ex-assistant of Weinstein’s who dared to break her non-disclosure agreement in order to expose him), adds a much-appreciated scene of fierce, uncompromising resistance to a system that works to keep victims quiet.

Each moment spent with various survivors telling their stories makes you want to follow them further and focus on their journey. Alas, the film isn’t about just that. It’s about the creation of the news piece. Unfortunately, a number of the moments focusing on the newsroom politics don’t feel as compelling as the testimonies of the victims.

That’s not to say that Carey Mulligan as Twohey and Zoe Kazan as Kantor don’t give solid performances. The film even gives us glimpses of the main characters as working mothers attempting to strike a balance between their careers and their personal lives. Mulligan and Kazan are naturals, but many of those scenes aren’t as compelling to sit through.

A wonderful strength of the movie is that it doesn’t portray Weinstein as some sort of lone-wolf boogeyman. As good journalism does, it connects singular issues to bigger questions affecting society. Weinstein’s case is no different. The reason why his exposure helped to spark the viral movement that it did is because his behaviour was not an anomaly, but rather the status quo in a system embedded in patriarchy and sexism.

Holding Weinstein accountable publicly brought about a reckoning to other well-known names. In a number of cases, it brought attention to women on the job dealing with harassment outside of Hollywood. She Said keeps this sentiment at the forefront. The choice by director Schrader to keep Weinstein faceless (you only hear his voice and see his body) helps to centre the victims and their stories. It’s a symbolic gesture showing that Weinstein could be any boss at any workplace.

She Said does follow many of the same beats we’ve seen before in films of the same nature, but that doesn’t mean the topic it covers is any less worthy to behold. The scenes of testimonies alone are worth the watch. The ‘MeToo’ movement is still ongoing, so any film that reminds us of this continued battle is welcomed. (IPA Service)