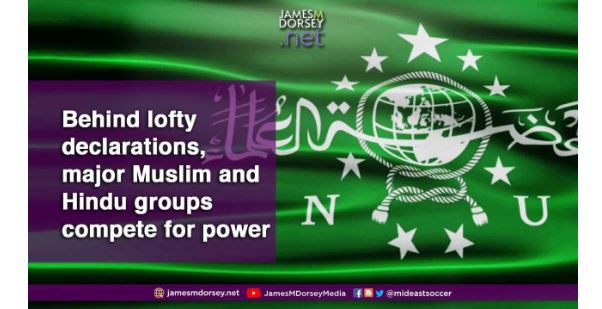 As Indonesia passed the chairmanship of the Group of 20 (G-20) to India earlier this month, major Muslim and Hindu organisations, some backed by their governments, are battling to define the role of religion in global politics and whether the world’s significant faiths need reform to harness the power of their convictions.

The battle’s outcome could determine what constitutes religious moderation, the state’s role in defining what religion stands for, and whether notions of reform will involve significant jurisprudential and doctrinal reforms aimed at erasing concepts of supremacy and enhancing principles of pluralism and greater freedom.

The stage for the battle was set at the Religion Forum-20 (R-20), a gathering of religious leaders in Bali, earlier this month in advance of a summit of the Group of 20 that brought together leaders of the world’s major economies.

Like the summit that positioned Indonesia, the world’s most populous Muslim-majority country and the world’s largest Muslim democracy, as a rising power, the religious gathering positioned Nahdlatul Ulama, the world’s largest and most moderate major Indonesian Muslim civil society organisation, as a leading force in defining moderate Islam and promoting concepts of genuine religious reform not only of Islam but also of other major faiths such as Hinduism.

The movement promotes what it dubs Humanitarian Islam, that in contrast to state-driven attempts at moderation in autocracies such as Saudi Arabia, home to Islam’s two holiest cities, Mecca and Medina, and the United Arab Emirates,  unambiguously embraces the Universal Declaration of Human Rights as well as the principle of religious and political pluralism. Moreover, Nahdlatul Ulama advocates reform of what it terms “obsolete” elements of Islamic jurisprudence.

On the back of being a grassroots movement with an estimated 90 million followers, 18,000 religious seminaries, 44 universities, tens of thousands of Muslim scholars that constitute a religious authority independent of traditional centres in the Middle East, and a political party that is part of Indonesian President Joko Widodo’s coalition government, Nahdlatul Ulama throws down a gauntlet for proponents of a state-controlled, autocratic Islam as well as religious nationalists in other faith groups.

Its proposition was bolstered in 2019 when the group took the first step towards jurisprudential reform with a ruling issued by 20,000 religious scholars that eliminated the category of the kafir or infidel in Islamic law. Nahdlatul Ulama had hoped that gathering religious leaders in advance of this month’s G-20 summit would position reformist religious leaders as an institutionalised engagement group of the world’s most powerful political leaders and spark a movement that based on shared civilisational values would promote moderate and pluralistic expressions of religion across faith groups.

Less than a month after the religious gathering, that is proving to be easier said than done. Rather than creating real buy-in from other major Muslim organisations, like Saudi Arabia’s state-controlled Muslim World League, whom Nahdlatul Ulama invited to co-host the religious summit, and Rashtriya Swayamsevak Sangh (RSS), the right-wing Hindu nationalist group, that constitutes the ideological cradle of Prime Minister Narendra Modi and his ruling Bharatiya Janata Party (BJP), the summit appears to have sparked a subtle power struggle below the semblance of a common goal.

The RSS and the BJP are widely seen as attempting to hollow out Indian democracy and secularism while instigating anti-Muslim sentiment in India, which is home to 200 million Muslims, the world’s largest Muslim minority.

Barely back from the religious summit, Ram Madhav, an RSS national executive member and close associate of Modi whom many see as a moderate, fired the first Indian salvo in the inter-faith power struggle as Indian officials and religious leaders conceptualise what they want to achieve at next year’s G-20 and what role religion and religious leaders may play.

Chipping away at Indonesia’s designation of the Religion Forum-20 as an official G-20 engagement group with a permanent secretariat hosted by Nahdlatul Ulama’s Jakarta and North Carolina-based Center for Shared Civilization Values (CSCV), Madhav was non-committal in his first public remarks after returning from Bali to India.

Madhav expressed a personal preference for maintaining the Religion Forum with the caveat that it remained unclear whether the gathering would be allowed to retain its official G-20 status.

“The (Indian) government will take an appropriate decision,” Madhav said in a television interview. He dodged the issue of religious reform, insisting that the “R-20 per se is not necessarily about religion, it’s about humanity.”

Spinning the R-20’s slogan of ensuring “that religion functions as a genuine and dynamic source of solutions, rather than problems,” Madhav suggested that religion could help solve global problems such as climate change and tackle what he described as “woke” issues “like LGBTQ; issues related to family, marriage, even gender;” rather than exercise introspection to eliminate problematic religious tenants as advocated by Nahdlatul Ulama.

“This forum was intended to discuss…global issues. In that sense, the focus of this…religious forum was and will not be religions alone… It will be not religion-centric but humanity-centric. So, an effort to bring religions together on larger issues,” Madhav said.

Similarly, the Muslim World League has used the R-20 to tout its own horn while paying lip service to lofty values Bin Salman would like to be identified with but has yet to embrace wholeheartedly. The Indonesian group invited the League after the Saudi government asked Indonesia to assist in carving out a role at the summit for Bin Salman’s chief propagator of a socially less restrictive but autocratic interpretation of Islam that demands absolute obedience to the ruler.

The invitation fit into a bold but risky strategy that also underlies Nahdlatul Ulama’s engagement with Hindu nationalism. In the League’s case, Nahdlatul Ulama hopes the alliance will undercut Saudi and League support for an Indonesian political party associated with the Muslim Brotherhood, the Prosperous Justice Party (PKS).Some analysts and pundits believe that a PKS-backed candidate could do well in the presidential elections scheduled for 2024.

Moreover, like in the case of the Hindu nationalists, Nahdlatul Ulama aspires against all odds to persuade the League to adopt a genuinely moderate vision of Islam rather than one that serves Saudi Arabia’s autocratic rulers. However, that is a long shot, if not pie in the sky. (IPA Service)