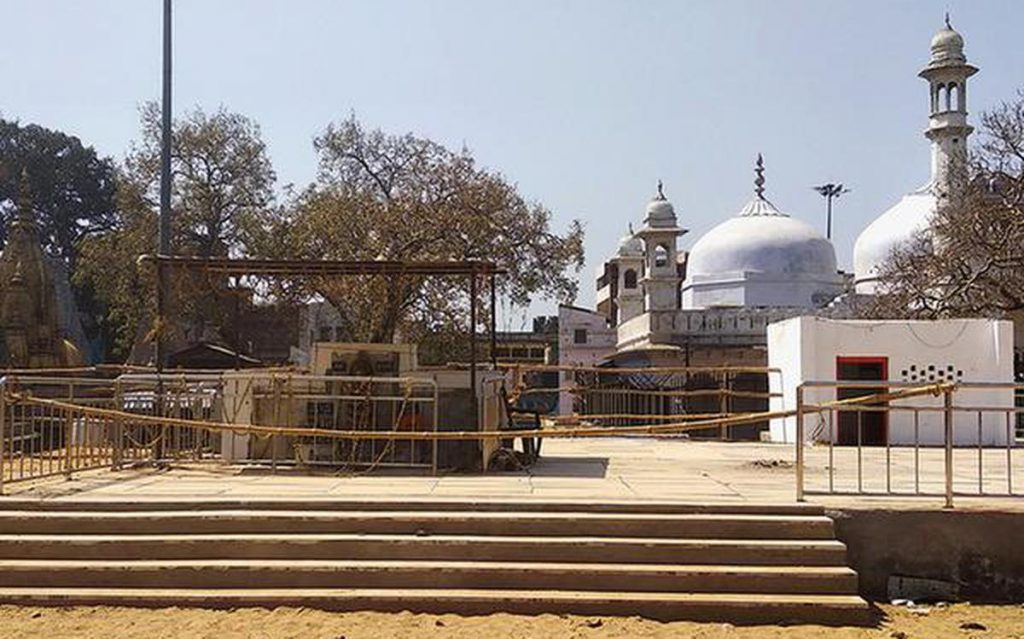 With the world waking up to the possibility of the temple-mosque disputes in India becoming yet another religious flashpoint, as the BBC has said, the worst fears of the country’s well-wishers are coming true.

The apprehension that the BJP’s rise to power will increase the communal temperature is proving correct. The fond belief that the responsibilities of power will curb the party’s anti-Muslim outlook hasn’t been fulfilled.

Beginning with low-key campaigns against the Muslims with ghar wapsi (reconversion) and love jehad programmes decrying interfaith marriage, there has been a gradual increase in the saffron brotherhood’s communal venom, leading to the lynching of Muslim cattle traders and suspected beef eaters.

Now, another menacing stage has been reached with the targeting of mosques in keeping with the slogans that were raised at the time of the Babri masjid destruction in 1992 – yeh toh pehli jhanki hai, Kashi, Mathura baki hai, meaning that the Babri demolition was only the first step, Kashi (Varanasi) and Mathura (mosques) will be the next ones.

For the BJP, the focus on the Babri masjid from the late 1980s was an ideal way to whip up anti-Muslim sentiments by charging the minorities with building a mosque at the birthplace of Lord Ram in Ayodhya. Prior to that, the BJP did not have an emotive issue to enthuse the rank and file.

The injection of religion in the 1990s into the tirades against Muslims yielded high political dividends for the BJP and foxed the “secular” parties which were at a loss on how to counter such an appeal. The BJP hasn’t looked back since then. Having achieved its goal of building a temple at Lord Ram’s birthplace, the party is now turning to achieve similar feats at Varanasi and Mathura.

However, the problem for it is that the world will be wary of more attacks on mosques on the lines of what happened in Ayodhya and the resultant outbreak of riots. As it is, India’s position is said to be “much below” among the indicators of the World Bank’s world governance report because of the “negative commentary on India by think tanks, survey agencies and international media”, according to India’s own assessment. The negativity will hurt India even more in the event of Hindu-Muslim clashes.

It took a long time for the BJP to recover from the blow inflicted on its prestige by the 2002 Gujarat riots. The recovery was aided by the party’s decision to turn the spotlight away from communalism to economic growth.

But with the developmental prospects slowing down because of high unemployment and high inflation, the party has resorted to playing its trump card of stoking Hindu-Muslim animosity by paying the Muslims back in their own coin by breaking mosques in retaliation for their acts of breaking temples in the medieval times.

In the modern age, the Nazis were the only ones who targeted their religious adversaries by setting on fire the synagogues of the Jews. The BJP’s attacks on mosques are the second instance of such vandalism. However, with the BJP’s democratic credentials under fire from organizations like the Freedom House of the US and V-Dem Institute of Sweden, the party cannot afford to let communal discord further blacken its record.

Even if the targeted mosques are not immediately attacked, the outpouring of hate on the social media is showing how far India has moved away from the days of Nehruvian secularism when the minorities – mainly the Muslims, Christians – generally had little to fear and went about their daily business without let or hindrance.

As for the other minorities like the Jains or Sikhs or Zoroastrians, they never had any doubts about being an integral part of India. There were no books by saffron writers identifying them as “internal enemies” as M.S. Golwalkar of the RSS (1906-73) did with reference to Muslims and Christians.

It was only in 1984 that the Sikhs faced Hindu enmity after Indira Gandhi was assassinated by her Sikh bodyguards. But that was a one-off tragedy which has receded into the background although groups of Sikh extremists or Khalistanis are still around in Pakistan, America and Canada. Otherwise, the old Hindu-Sikh amity has been restored.

Arguably, Hindu-Muslim friendship would also have been restored if the BJP did not find it politically convenient to talk incessantly about righting the “historical wrongs” of the Muslim invaders of the medieval times destroying temples. As long as the party scratches old wounds to draw blood, India will not know peace. (IPA Service)

Ukraine War Fallout Takes The Clock Back On Shift To Electric Vehicles
Posting....