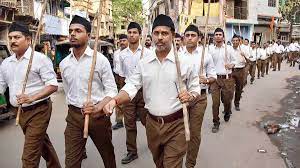 Making a strategic shift, from accomplishing its mission to create a “Congress Mukt Bharat”  the BJP  ironman Narendra Modi ably supported by his mentor  RSS has embarked on the path to obliterate the opposition and particularly the  regional parties from the political map of India.

The two day national conclave of the leaders of all the frontal organisations in Patna on July 30 and 31 was a major step to achieve the mission. It had tow well defined agenda; first to ensure the return of Modi as the prime minister for the third consecutive term and second, to completely finish the opposition in these states of eastern India.

On the last day of the conclave, the national president of the BJP  J P Nadda in fact did not make any effort to conceal the intentions when he said ” in near future India will be left with only one party and that would be BJP”. It obviously implied that other political parties would be completely dissipated or eradicated from the political map of India.

The dispassionate objective of the BJP leaders was manifest in their determination to revive and rejuvenate the frontal organisations and make them interact with the people at the village level. In a special thrust on the four states of eastern India, the leaders cautioned the participants from becoming complacent and wasting their time and energy on trivial issues. That the leaders were more concerned about these four states was also borne out from their assertion to contest 200 assembly seats and 40 Lok Sabha seats in Bihar and a major reach out in Bengal and Jharkhand.

Tactically the leadership would prefer to continue to keep alive the NDA in Bihar and Jharkhand, but the party would face the polls on its own without resorting to the mechanism of seat sharing. This move precisely aims at turning the regional outfits, RJD and JD(U)  weaker.  In a shrewd move without letting its real intentions known, the party asserted that everything was well in the NDA government in Bihar and it would contest the general elections and the 2025 Assembly elections with chief minister Nitish Kumar’s Janata Dal United (JDU) as the partner.

Though the BJP leaders wanted to showcase their bonhomie towards Nitish and his JD(U), during the conclave, in a tacit manner they did not deter from showing their aggressiveness towards Nitish by raising the issue of Friday holiday for students reading in Muslim Institutions. On Fridays Muslims offer namaz and the students would be on leave on this day to participate in namaz.  Nevertheless the BJP leaders are against providing this privilege to the students. On the contrary Nitish and his JD(U) leaders are against rescinding this facility. The state BJP leaders, it is alleged, raised this issue only to depict the image of Nitish as pro Muslim amongst its all India cadres and leaders.

In Bengal the party has been surviving on the borrowed strength from the Trinamool Congress. What transpired at the meet was surpassing and shocking too. The national leaders are yet to repose their complete trust on the state leaders and rely on them for the expansion of the party. There is lingering apprehensions in the leadership that they have migrated to BJP for enjoying power and protecting them from the wrath of CBI, ED, IT, the investigating agencies.

The BJP has to look for fresh set of young and dynamic leaders under the escalating pressure from the RSS, which has not been happy with the functioning of the state unit and its leaders.  Though groupism and factionalism have been all India syndrome which badly affects the functioning of the party, the factionalism that afflicts the party in Bengal has been of the nature of ethnicity and cultural. Tactically this may help the BJP in polarising the population and strengthen its base, but it would completely denigrate and degenerate the party.  Though the party has managed to increase its vote share from 3 per cent to 32 per cent, this would prove to be dangerous in keeping intact its support base.

Just ahead of arrival of Amit Shah and J.P. Nadda to Patna to attend the two-day party conclave on July 30-31, the party has announced a new political strategy in the run-up to the 2024 Lok Sabha polls of launching “Prawas programme” in 243 Assembly constituencies in the state. In fact the party organisation officials stayed in 200 Assembly constituencies in Bihar on July 28 and 29 to take feedback of the people. The sources confided that the party is contemplating to launch “prawas programme” soon in Bengal and Jharkhand.

According to the Prawas programme, the BJP organisation officials will interact with the people and get the feedback from the ground level. The primary task to assess the peoples’ attitude towards Modi government and the impact of the caste and religion on the politics. Amit Shah on the concluding day gave a desperate call to BJP workers to strive towards achieving yet another victory for Modi in 2024 Lok Sabha polls “with an even bigger majority”. If the content and nature of Shah’s speech was any indicator, it could be safely construed that the conclave was also an instrument to convey the message that Modi was for the welfare of the dalits, tribals and  OBCs. He would do anything to empower them.

Apparently the BJP workers and cadres have been assigned with the task, but in reality the RSS reached out to the people to have the feel of  the situation on how people are thinking ahead of 2024 Lok Sabha and 2025 Bihar Assembly elections. If the sources are to be relied the feedback has not been quite encouraging. Though on the issue of religion and nationalism the people nurse soft corner for the BJP, they are quite disgusted at its failure to improve the economic condition of the poor. The people from backward castes and dalit complain of rich and feudal lords continue to torture and repress them. They are being denied the benefits the government was offering them.

Senior BJP leaders however confessed that the party is not sure of repeating its 2019 performance when it had won 303 out of 545 Lok Sabha seats and through this meet the party has started gearing-up for the 2024 polls out of desperation to remain in power. It is scared of future performance due to losing ground in the Assembly elections in states like Uttar Pradesh and Punjab.

The much -hyped meet which is claimed by some leaders as the brain child of Modi had its share of major setbacks.  Notwithstanding the NDA having its government in Bihar, Nadda could not address his party cadres and students of Patna University at Patna College as AISA Activists belonging to the CPI(ML) liberation demanding scrapping of New Education Policy forced him to leave the campus in haste. While he was shown black flags, the activists of the All India Students Association (AISA) raised slogans shouting “JP Nadda go back”. The students were agitated at the passive attitude of Modi in granting the Central status to Patna University.

Just on the heels of the conclave the Chief Ministers of the BJP-ruled states will hold a meeting with senior party leaders in Delhi. Assembly elections are to be held in Gujarat and Himachal Pradesh later this year and Chhattisgarh, Rajasthan, Telangana, Tripura, Madhya Pradesh, Karnataka, Meghalaya, Mizoram, and Nagaland will go to polls next year. “Shah asked workers to devote four days, from August 9 to 12, for spreading patriotic sentiments in view of the Amrit Mahotsav (75 years of Independence),” said Arun Singh, BJP national general secretary, at a media briefing. (IPA Service)