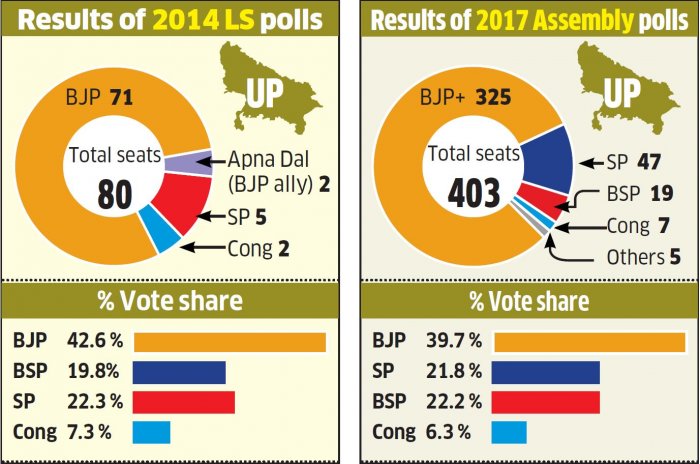 There is “gehri manthan” going on as to what led to the Samajwadi Party loss even after all the signs on the ground pointed to a Bharatiya Janata Party debacle? More important, why did an entire tribe of political analysts fail in their “reading” of the situation unfolding? There is genuine consternation. There was no lack of ears to the ground. Even the caste-equations were pat.

Yet, all of them got it wrong. Some have since expressed “remorse for failing to read the signs”, albeit with the caveat that there were “no visible signs to read to start with.” Others are blaming the voters for falling for the lies and falsehoods of Modi & Yogi, and voting for the “evil Hindutva” BJP.

Thinker and ‘kisan’ leader Yogendra Yadav tweeted his “disappointment” at the “not surprising election results” and said that the “road to 2024 was always tough, it got tougher today. India will put up a fight. We shall reclaim our republic.”

With those elevating and challenging words, Yadav went to a TV debate and there he let his disappointment really show, “The result of a support for dismantling of the republic with the support of the public,” he told everyone.

Analysts like Yogendra Yadav, if they want to “put up a fight” in 2024 should start afresh, not blame the electorate. There are certain stark facts to look at afresh. One of which is that at the end of the day, it turned out to be a one-on-one clash between the BJP and the Samajwadi Party. And, in a straight bipolar confrontation, there was no way the Samajwadi Party could have trounced the BJP.

The saffron party made sure Mayawati’s Bahujan Samaj Party stood neutered in the aisles. That was because to some extent, the BJP has succeeded in the “annihilation of the castes.” The non-jatavs among Mayawati’s vote-bank moving to join the class of “labharthis” is proof. Like it or not like it, believe it or not believe it, the caste-system is being dismantled brick-by-brick for bringing about far-reaching changes to suit the political rightwing.

Prime Minister Narendra Modi had in the eight years since 2014, along with Chief Minister Yogi Adityanath in Uttar Pradesh, created a “Garib class”, in which caste lines had blurred and everyone was “in need” — in need of rations, of “sunflower oil” and the “antodaya card.” This class also transcended the communal and the religious.

Everybody in this was bound in the same poor swathe of cloth. And it was straight out of the RSS playbook. The larger goal of the RSS is the broad-basing of the Hindus in one single block. But the division of Hindus in castes stands in the way. The Modi and Yogi “double –engine ki sarkar” has been systematically raiding the public exchequer to pay for the creation and consolidation of a casteless Hindu electorate.

And they are succeeding, too. The caste-system is a stark reality across India, but ‘sculptors’ are hard at work, chipping away at the edges of the caste lines, painting them over with the thick brush of economic benefits, a.k.a freebies. The poor have been bought over with taxpayer money. In Bollywood dialogue, “Gharib Rath Ko Khareed Liya!”

India now has a burgeoning “poor class”, the BPL now fed and fattened too cast out the caste. The “poor class” will always remain poor. The “Mudra Yojana” and the ‘antodaya’ scheme combined with free rations and sunflower oil and “free gas” will ensure they voted Modi & Yogi till 2024, and even thereafter. The poor are always grateful and Modi & Yogi are creating a grateful class of committed vote-bank.

Another class created by Modi is the “Mahila Class”. What is the male to female ratio in the country, in Uttar Pradesh? It is somewhere in the region of 910 females per 1000 male, and half of the electorate is women, a “class” that blurs castes without even trying to.

So, stressing that the non-Jatav “lower castes” shifted en bloc from the BSP to the BJP is missing the woods for the tree. The non-Jatavs had merged into the “poor” and the “mahila” classes much before they decided to dump Behan Mayawati and vote for the BJP. Once part of the “poor and mahila classes”, the non-Jatavs were expected to behave” in the same manner as everybody else in these two classes.

At the end of the day, after all the allowances were made to the emerging runner-up and after all the course corrections were made, including the margins of error applied, if there still remained a gap of 10-15 percent in the vote-shares between the front-runner and the runner-up, then there was no way a somewhat near-replica of the 2017 UP assembly elections could have been avoided.

The electorate had also burgeoned to 15-plus crore. Result: Both the BJP and the Samajwadi Party gained in vote-share, but the ‘Poor’ and ‘Mahila’ classes won the day for the BJP, stole it under the noses of the puzzled political analysts. (IPA Services)