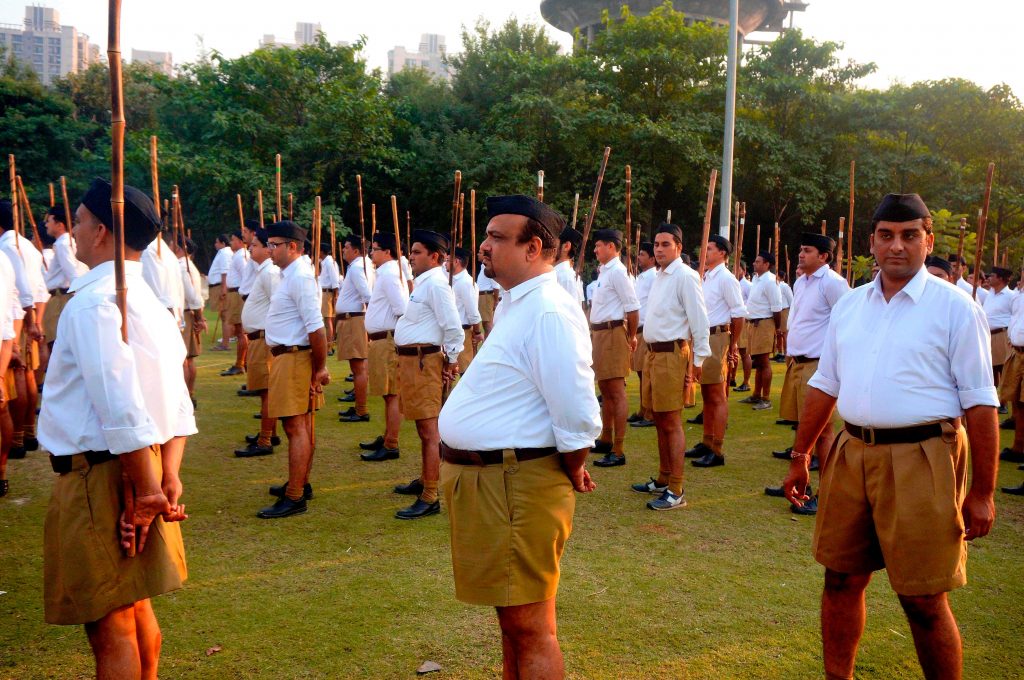 RSS chief Mohan Bhagwat’s vijayadashami speech exhibited the confidence of the organization and its strong desire to  intervene  in the contemporary social and cultural churning in India. RSS’s ideological shadow has spread beyond its organizational reach and cadre. Sontosh Yadav, the chief guest at the function on October 5, said, “she was called ‘sanghi’ despite her unawareness of the Sangh”. The Sangh’s new venture is to hold serious cultural dialogue with so called minority communities, especially Muslims and Christians, on the question of what constitutes Indianness and Hindu Rashtra.

Earlier  too, RSS Chief  M S Golwalkar , Balasaheb Deoras and K S Sudarshan held interaction with minority groups. However, the new initiative aims at more constructive results. Bhagwat’s emphasis on the role of social power is an acknowledgment of limits of political power in resolving vexed historical question. The Lucknow pact of 1916 signed by M A Jinnah and Bal Gangadhar Tilak, representing the Muslim League and the Congress was a blunder. Instead of bringing the two communities together, it sanctioned the dichotomies between them. Lessons from pre-partition history must be heeded.

Bhagwat has signalled a further need for dialogue to accomplish two objectives. The primary goal is to remove the perception, based on conspiracy theories, that the RSS is not a threat to minorities. So dialogue with elite is required. This is to be followed by a cultural discourse on nationalism and the Hindu civilization with masses. This may seem utopian to those who failed to see the emerging social realities. It is also true that the task is riddled with complexities and risks. But letting anarchists and political class occupy this space will worsen the situation. For instance, on triple Talaq and Article 370, the elites were delegitimized by the masses. As the largest and more effective ideological force in the country, the RSS has a moral responsibility in making the forward movement.

Once criticized as an enemy of India’s diversity, the RSS is projecting itself as vanguard of social and cultural pluralism. Its expansion has not been based on emotional appeals and has not been motivated by the desire to capture state power organisations or movements that works on lines that are vulnerable to power dynamics.. The growth of RSS has taken place in the face of contempt by those favoured by the state. In its history of more than 97 years, the sangh has managed to tide over the occasional dissent by evolving a collective will and following it in letter and spirit. This is what makes the RSS exceptional. It succeeded in spreading the message of resurrecting India’s civilizational glory—this ethos is the soul of the RSS’s ideology and programmes. By working without a rigid blueprint, the Sangh interprets, contextualizes and redefines its ideological understanding.

According to the present RSS leaders, the RSS’s sense of purpose has led to the organization being accepted among the working class, slum dwellers, women and tribal, traditional the left’s domain. This was acknowledged by the CPI (M) in its ‘organlizational and political report, 2008’. The report stated that “apart from RSS front organisations, like the BMS and ABVP and VHP, many other front organisations (like Seva Bharti, Vidya Bharti and Vanvasi, Kalyan Ashram) are working systematically to penetrate new sections of the people in new areas.

RSS sources say that no India—centric alternative to the RSS understanding of nationalism, culture has been proposed. Many in the Constituent Assembly, and later in the Congress and Socialist Movement, showed partially or full solidarity with the Sangh. In an article in the Mahratta on November 18, 1949, B G Kher, a Congressman warned “Calling them (RSS activists) fascist and communal and repeating the same allegations ….. hardly serves any purpose.

The content of critiques of the RSS has, however, remain unchanged for decades. This happens to social and cultural movement when the political class enjoys a convenient majority and intellectual legitimacy. The Nehruvian regime had both the things. Its successors fails to realize their shrinking base and continue to practice ideological untouchability towards the RSS. Nehruvians have borrowed the western phrase “post truth” to demean the popularity Prime Minister Narendra Modi enjoyed. Debates on news channels on social, religious and cultural issues add fuel to fire. Many

BJP leaders say there is much to show that RSS role in history has been wrongly presented by the Nehruvians and Marxists. In a debate on the ideology and organization of the RSS in the Legislative Council of Central Provinces and Berar in March 1934 M S Rahman contested the government’s allegation that it was a communal organization.  All the 14 members who participated in the debate vouched for its tradition as a cultural organization of Hindus. (IPA Service)