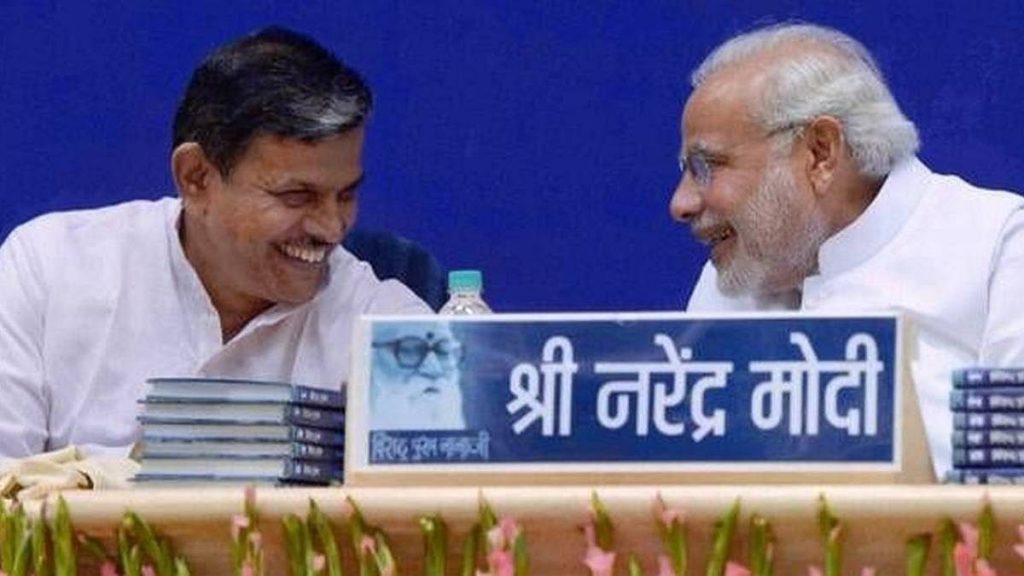 Rashtriya Swayamsevak Sangh (RSS) general secretary Dattatreya Hosabale’s comments on rising poverty, unemployment and inequality is virtually of the nature of censoring the Modi government for its utter failure to provide a people oriented governance.

Target the Modi government by Hosabale, next only to Mohan Bhagwat, the chief of RSS, underlines explicitly that RSS and Modi are not on the same page. His observation attains more significance for the reason that he told these tough words to the members of the Swadeshi Jagran Manch (SJM), a prominent constituent of the RSS, which is deeply involved in framing the saffron policies on economic issues.

Though the BJP leaders close to Modi tried to play it down by saying that he too has been saying it , this has already shaken the trust level of the saffron rank and file.  On his part the BJP spokesperson Gopal Krishna Agarwal tried to mellow down the impact of the remark by saying that “the party does not have a particular stance on what Hosabale said, but he has underlined some of the challenges which are common”, his endeavour has utterly failed to convince the saffron members there is nothing wrong.

While political experts are divided on the significance of the statement made by Hosabale, the ideological mentor of the BJP, some senior BJP leaders, not willing to be named, blame Modi for creation of this situation. They nurse the feeling that recent assertions of Modi at the behest of Amit Shah, and ignoring the authority of the RSS, has been at the root of Hosabale’s outburst.

Nevertheless some political observers hold the view that Hosabale has blue-penciled  the Modi government to deflect the peoples’ anger. In their perception this is a strategic move to protect the image of BJP. There is a general impression amongst the people that RSS has been parent organisation and the BJP takes the direction from it. The manner in which Modi was acting in recent times has sent the message amongst the people that these wrongs were being done at the behest of the RSS, as it was not pulling up Modi and his aides.

It is worth taking serious note that Hosabale had compared poverty to a demon which has to be slayed. He told the meet; “Over 20 crore people who live here are below the below poverty line. Around 23 crore people are having an income of Rs 375 per day. Unemployment rate is also very distressing at 7.6 per cent. There is poverty, unemployment in the country but we also need to discuss the rising inequality”. He obviously intended to send the message that Modi government was not serious to the emerging scenario, which is undoubtedly precarious.

He further said; “Even when India has managed to be among the top six economies in the world, we can’t say all is well. One percentage of the population in India holds 20 per cent of the country’s wealth, while 50 per cent has 13 per cent of wealth. We must do something about this economic inequality.”

This January the SJM, along with seven other saffron organisations, had launched the ‘Swavalambi Bharat Abhiyan’ (SBA), which aims to make India unemployment-free by 2030. Significantly Hosabale also pointed to the poor level of education as one of the reasons behind unemployment. It obviously implied that the education policy of Modi did not suit the needs of New India. In this backdrop how could anyone claim that his comments should not be seen as criticism of the current government?

Recent visit of Mohan Bhagwat to mosques and masjids and extending invitation to Muslim scholars is only a damage control exercise. He knows that 22 crores Muslims are going to be decisive factor in that election. He cannot imagine complete consolidation of Hindu votes in favour of BJP. A major section of the Hindus who had rallied behind Modi in 2019 are feeling alienated. BJP must reach out to Muslims for ensuring the electoral success.

It is worth recalling that in his address on May 15, Bhagwat had blamed the Modi government and the administration under him for lowering their guard after the first COVID-19 wave. “We are facing this situation because, whether it was the government, administration or public, everyone dropped their guard after the first wave despite indications from doctors,” Bhagwat had said. Bhagwat’s statement was the first public criticism of the Modi government by him since 2014. Nagpur had so far played a fully supportive role.

It is argued that RSS has benefited maximum under the Modi rule. Obviously why should the RSS criticise his government. Does it mean that the RSS should allow Modi and his aides to digress from the policies and programmes and disobey the directives of the RSS? It is the part of the same old game of exercising control and enjoying freedom.  RSS and Modi are indulged in this game.  It is claimed that from 51,335 ‘shakhas’ in 2015 the number has grown by 13 per cent to 58,967. Certainly the RSS will not like to lose the ace advantage. But the RSS sources say that in recent the number of Sakhashas gone down.

Just after Modi became prime minister and picked up the cause of Hindutva, a large number of urban middle Hindu youth got enrolled as the members of the RSS sakhas. But in recent times it is on decline. RSS’s several strategies to attract more young blood into its fold have failed to fructify. What is most worryingfor  the RSS is the averseness of the OBC and Dalits to join its base level organisations. Though the BJP leadership claims that the backward caste people enjoy the same amount of say and prestige in the party, they feel upper caste people continue to call the shots in RSS and BJP. They have no standing in the party.

The BJP leadership suffers from the fear of losing the face and credibility once the RSS distances itself. The fact cannot be ignored that the advantage the BJP enjoys over other political parties owes to its proximity to the RSS. Disobeying RSS has cost even a leader like L K Advani heavily. He had coined the phrase “BJP is a party with difference”. He is now in oblivion.

The recent censoring is manifestation of the war of ego and personalities between the RSS and BJP.  RSS cannot tolerate a BJP straying away from the dogmas and prescriptions Nagpur dished out under the Hindutva rulebook. RSS has been at the base of ensuring the electoral victory of BJP. Naturally it cannot withstand the red eyes of the BJP leaders. But the BJP leaders did not follow the guidelines of the RSS. Very recently it reconstituted its two top decision-making bodies and dropped the leaders who have been virtually the RSS face in the party. (IPA Service)