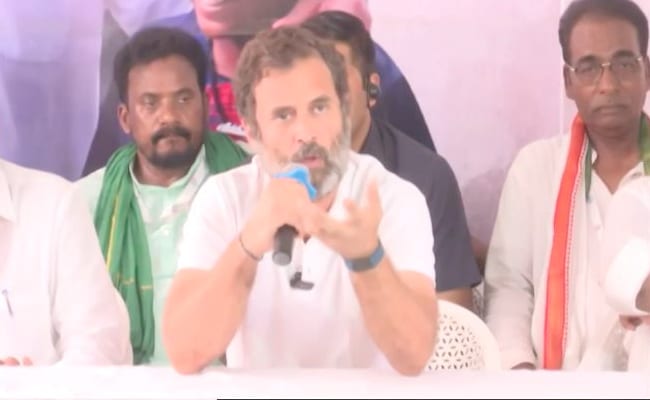 Congress leader Jairam Ramesh on Wednesday defended Rahul Gandhi for referring to veteran leader Mallikarjun Kharge as the new Congress president even before the result of the party election was announced. The direction of voting was quite clear when he made the comment at the press meet, Ramesh said, criticising “erroneous media reports” over Rahul Gandhi’s comment.

There have been erroneous media reports that Rahul Gandhi announced Kharge-ji as Congress President during his press meet that began at Adoni at around 1pm. The fact is that the direction of voting was quite clear before the press meet began.

“The new president will decide what my role will be. Ask Kharge ji and Sonia ji,” Rahul Gandhi said to a question on his role in the party.

Rahul Gandhi, who led the party’s ‘Bharat Jodo Yatra’ into Andhra Pradesh, made the comments during a press meet around 1.30 pm, at a time when the counting was on. Results were not declared until around 2 pm.

“I can’t comment on the Congress president’s role, that’s for Mr Kharge to comment on,” Rahul Gandhi said about what the new president will do while he remains the face of the party. “I am very clear as far as my role is concerned. The president will decide what my role is and how I am to be deployed… that you have to ask Kharge ji and Sonia ji.”

A staunch Gandhi family loyalist, Mallikarjun Kharge, 80, was widely seen as a frontrunner even before votes were cast on October 17 for the Congress to get its first non-Gandhi chief in over two decades. Kharge was reported to have the support of senior leaders in the party, including Rajasthan Chief Minister Ashok Gehlot, who was the first choice for the Gandhis.

Kharge’s rival Shashi Tharoor had complained about “bias” and “uneven playing field” in the run-up to the elections. The Congress MP from Kerala had alleged “extremely serious irregularities” as votes were counted in Uttar Pradesh and demanded that votes in the state be cancelled. “We did not contest this election to accept business as usual,” said team Tharoor.