Row over misleading tweet by Rijiju with old Tawang photo 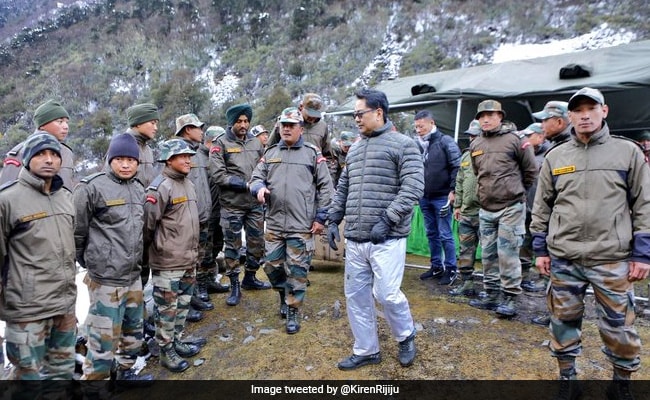 Law Minister Kiren Rijiju’s tweet showing a photo of him meeting soldiers in Arunachal Pradesh to say the area “is fully secured” has come under criticism as a misleading post. Mr Rijiju had posted another photo, taken from a slightly different angle, from the same visit on October 29, 2019.

Rijiju tweeted the photo in response to Congress leader Rahul Gandhi’s comment that China is preparing for war while India is ignoring the threat. Indian troops recently stopped Chinese soldiers from unilaterally changing the Line of Actual Control, or LAC, in Arunachal Pradesh.

In the tweet, Rijiju said Rahul Gandhi has not only insulted the army but also damaged India’s image with his comments.

“Rahul Gandhi is not only insulting Indian Army but damaging nation’s image. He is not only a problem for the Congress party but he has also become a huge embarrassment the country. We are proud of our armed forces,” the Law Minister, who is from Arunachal Pradesh, tweeted.

In another tweet that contained a photo of Rijiju standing with soldiers in Arunachal Pradesh, the Law Minister said, “Yangtse area in Tawang, Arunachal Pradesh is fully secured now due to adequate deployment of the brave jawans of Indian Army.”

Yangtse area in Tawang, Arunachal Pradesh is fully secured now due to adequate deployment of the brave jawans of Indian Army. pic.twitter.com/PVrW7usMyn

Congress leader Jairam Ramesh pointed out the photo tweeted by Rijiju is an old one and the tweet appeared to make it look like it is a current one.

“The same picture was put out three years ago if I recall. Shameless distorian,” Ramesh tweeted.

SAME picture was put out 3 years ago if I recall https://t.co/E35mhEVmkd

Some defended Rijiju’s post as not misleading, saying the Law Minister only posted a photo of the area and never claimed it is a current photo.

Fact-checkers and some opposition leaders, however, questioned the context in which Rijiju tweeted the photo, which made it look like the photo was taken after the recent incident along the LAC.