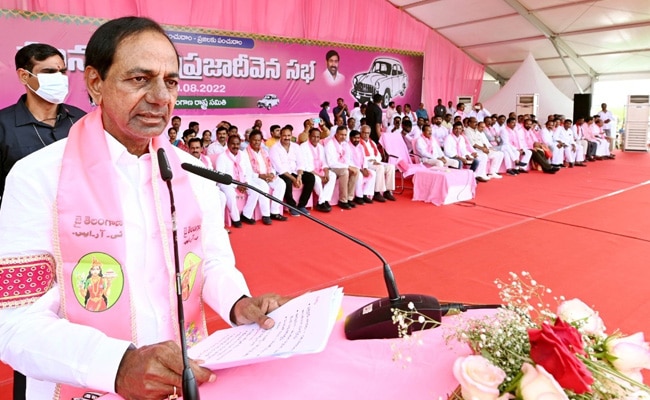 After months of positioning himself as a national player and touring states to meet anti-BJP leaders, Telangana Chief Minister and Telangana Rashtra Samiti President K Chandrasekhar Rao is on Mission 2024. He is all set to launch his national party.

The muhurat (auspicious time) has been set for 1:19 pm today for the launch of the party, likely to be called Bharatiya Rashtra Samiti.

On Sunday, the Chief Minister, also known as KCR, held a luncheon meeting with his cabinet colleagues and all 33 district presidents of the party. KCR is said to have discussed the roadmap for the launch of the national party.

KCR has been nursing national ambitions since 2018 with a standard attack point that both the BJP and the Congress have failed the country.

At various platforms, KCR had reiterated that “very soon, the formation of a national party and formulation of its policies will take place”. He is now gearing up for a straight fight with the BJP.

BJP Telangana spokesperson NV Subhash said that the foray into national politics is just a tactic by KCR to divert the failures of his government. “A 12-seater aircraft worth Rs 100 crores was bought for the new party. This is a famous illustration of how public money has been stolen. This will not be tolerated by the BJP,” he said.

The first election to be fought under the party is possibly going to be the Munugode bypoll that is expected to happen on November 4. The party is likely to contest assembly elections in Gujarat, Maharashtra, Karnataka, and Delhi.

Mocking KCR’s national plans, Minister of Tourism G Kishan Reddy said, “There is nothing new in parties coming and fading away. KCR once said that the apocalypse is about to come and this is it”.

KCR is also expected to reveal the agenda of his party after the meeting in Hyderabad. Elected members of parliament and assembly, legislative council members, zilla parishad chairpersons, mayors and municipal chairpersons, adding up to 283, are expected to attend.

The party wants to retain its election symbol of the car and also its pink colour, but it is still a long way from officially becoming a national party.

KCR has told party leaders they must tour different states to talk about the “highly successful” welfare schemes in Telangana over the last eight years to increase the political influence of the party.

Cong left with chairmanship of only one parliamentary panel
Posting....